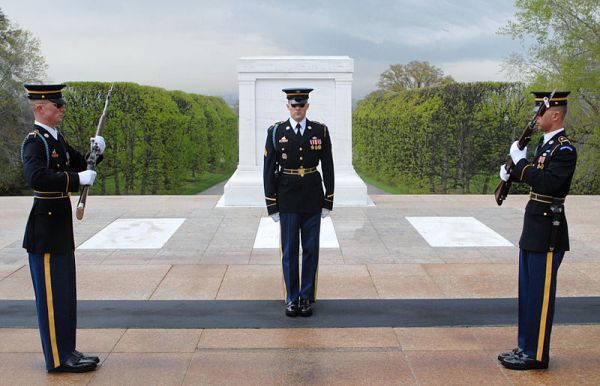 If you’ve been to Arlington National Cemetery, you’ve probably been impressed by the Tomb of the Unknown Soldier. The war dead interred there are representative of the hundreds of thousands of United States military service members who made the ultimate sacrifice, and the respect and reverence shown by the Old Guard sentinels who guard the tomb is unparalleled.

Members of the Old Guard must apply for the position. If chosen, the applicant goes through an intense training period, in which they must pass tests on weapons, ceremonial steps, cadence, military bearing, uniform preparation, and orders. Although military members are known for their neat uniforms, it’s said that the Tomb Guards have the highest standards of them all. A knowledge test quizzes applicants on their memorization—including punctuation—of 35 pages on the history of the Tomb. Once they’re selected, Guards “walk the mat” in front of the Tomb for anywhere from 30 minutes to two hours, depending on the time of year and time of day. They work in 24-hour shifts, however, and when they aren’t walking the mat, they’re in the living quarters beneath it. This gives the sentinels time to complete training and prepare their uniforms, which can take up to eight hours.

9. THE HONOR IS ALSO INCREDIBLY RARE.

The Tomb Guard badge is the least awarded badge in the Army, and the second least awarded badge in the overall military. (The first is the astronaut badge.) Tomb Guards are held to the highest standards of behavior, and can have their badge taken away for any action on or off duty that could bring disrespect to the Tomb. And that’s for the entire lifetime of the Tomb Guard, even well after his or her guarding duty is over. For the record, it seems that Tomb Guards are rarely female—only three women have held the post.

You’ll learn more about the guards at the Tomb of the Unknown Soldier in an article at Mental Floss, as well as everything we know about the service members who are buried there.