Looking for an opportunity to creatively resist Trump’s presidency? A group in the San Francisco Bay Area wants to hear from you. Established in response to Trump’s 100 day plan, which outlines the actions he means to take immediately after he’s sworn in, 100 Days Action is a community calendar of daily artistic events proposed by artists, writers, and activists that will take place in various locations from January 21st to April 29th, 2017. “Whereas the President-elect’s 100 days will seek to dismantle restrictions that protect our environment, public education, health, and will jeopardize unprotected minority groups, 100 Days Action is a forum for resistance, an artistic coming-together a call to all bodies that stand opposed to the forces of hate and destruction, to act together,” explains a statement on the group’s website.

Project organizer Ingrid Rojas Contreras tells The Creators Project how 100 Days Action came about and what it seeks to achieve: “At the inception of 100 Days, we planned to do takeovers of public spaces, host some events with galleries, and shape our counternarrative online.” The first of four proposal deadlines passed on January 15th and 100 Days Action is already in the process of developing several projects. 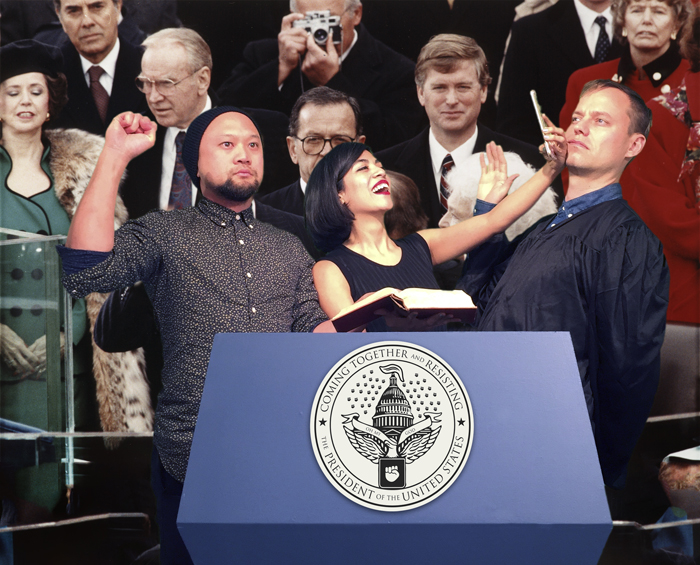 Upcoming projects include a 28-day performance by Raegan Truax, in which women are invited to bleed in public, as well as a panel discussion between an ethnic studies professor, a novelist, and a painter. “Scheduled for February 19, 2017, which marks the 75th anniversary of the day Pres. Roosevelt signed Executive Order 9066, ordering the internment of persons of Japanese descent, ‘Not My Precedent’ is a panel that will speak to the contentious claim that the Japanese internment camps can be a precedent for the proposed Muslim ban,” says Contreras. Additional events will be announced as proposals are received and reviewed. “We have also been talking to a climate scientist at Stanford, and are trying to develop a project that raises awareness of climate change—an early idea: ‘the ice cube challenge,’ a social media project where scientists and community members allow an ice cube to melt in the palm of their hand.”

Although the calendar of events doesn’t officially kick off until after the Inaugural Ball on January 20th, when the public will be sworn in to protect the constitution with the book and deity of their choosing, 100 Days Action has already held some events in anticipation of their launch. University of California, Berkeley professor Stephanie Syjuco, who is known for her political artwork, was invited by 100 Days Action to hold an open-source banner making workshop at Royal Nonesuch Gallery in Oakland. Syjuco tells The Creators Project, “the place was packed and many people expressed that it was the first time that they were gathering together to productively produce something for the post-election protests.”

A photo posted by Stephanie Syjuco (@ssyjuco) on


According to Syjuco, participants in the workshop told her that they planned to use the banners they made in the Women’s Marches across the country, as well as the J20 anti-inauguration protests, and more. “I’m hoping [the banners] become well-used and can also double as something to display in a window, on your wall, or be lent to others. They’re re-usable, thus multi-purpose and constantly able to ‘message.’”

The banner-making workshop was the first of several events that will take place at Royal Nonesuch Gallery, which Contreras says will temporarily serve as the headquarters for 100 Days Action. “We will set up a phone station so that during gallery hours, passersby may engage in the tangible actions of calling their representatives.”

Stephanie Syjuco poses with a banner from her workshop

100 Days Action will continue to accept proposals for future deadlines, which are: February 10th, March 10th, and April 10th. 100 Days Action Inaugural Ball takes place at Royal Nonesuch Gallery in Oakland on Friday January 20th (absurd ballroom attire encouraged!). Find out more about 100 Days Action on their website, and submit a proposal for an action of your own here.

Need More Activism In Your Art? Look No Further Than This Center