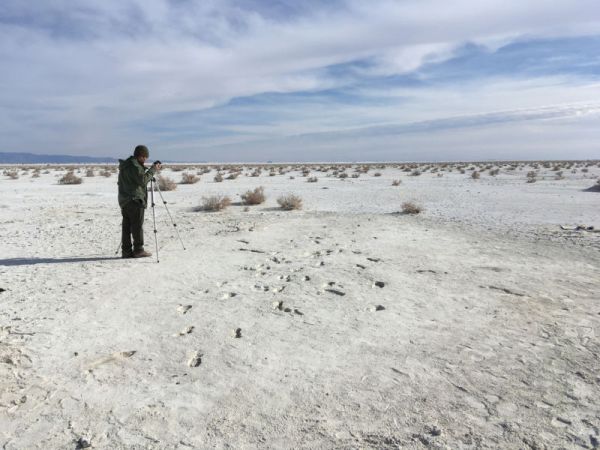 At Alkali Flat, a site near White Sands National Monument in New Mexico, scientists are studying ancient footprints to reconstruct a hunting party of Pleistocene humans as they fought against giant ground sloths.

“Most of the time they are invisible. There is a lot of salt in ground, and when it rains, the salt dissolves. And, crucially, as it dries out, the fill dries at a different rate and the difference between the fill (footprint) and the surrounding sediment makes the track visible for a brief time while it dries out,” explained paleoecologist Sally Reynolds of the UK’s Bournemouth University, a co-author on the paper. The team, led by the US National Parks Service’s David Bustos, used aerial photography to spot the tracks and then selected a few groups for careful excavation and study.

The tracks reveal that ancient humans once hunted a group of giant sloths along the shores of Lake Otero. Several human footprints are clearly superimposed inside the long, kidney-shaped impressions of sloth feet, pointing in the same direction, as if the human was deliberately stepping in the sloth tracks. That would require real effort; the average human stride, according to Reynolds and her colleagues, is about 0.6 m, but a giant sloth’s stride was anywhere from 0.8 to 1.1 m, so the human tracker would have had to take bigger steps.

The Clovis people, even armed with spears, had to be really brave to hunt a group of three-ton sloths with giant claws. But even one could provide food for an entire community. Read about the research and what they’ve found so far at Ars Technica. -via Metafilter