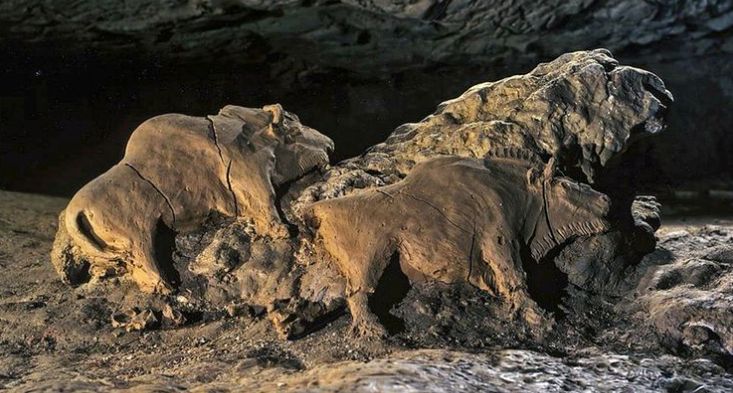 Surprisingly enough, these sculptures are very well-preserved. Intact prehistoric sculptures are a rare find, and these found in southwest France provide an insight into the lives and cultures of prehistoric humans. The clay bison sculptures date to about 13,000 BCE, and were among other artworks found by archaeologists, as My Modern Met details:

Careful exploration of the caves turned up hundreds of examples of artwork by the Stone Age Magdalenian peoples. These ancient humans were known to hunt reindeer, horses, and other big game during the waning of the Ice Age. Their ancient living and ritual sites have been found in France and Spain and include cave art, engraved bones, and other artifacts. The findings at the three caves added to the repertoire of ancient art attributed to the culture. In the Enlène cave, bone and ivory fragments carved with animal depictions were discovered. The craftsman chose to depict a horse’s head on a hyoid bone of a horse; a chamois (a goat-antelope creature native to the region) is also carved on the mandible bone of a bison.

The Enlène cave contained relatively few examples of wall art; however, the other two caves provide rich engraved and painted examples. At Tuc d’Audoubert cave, abstract club symbols (claviforms) shaped like the letter “P” were repeated frequently, particularly in a room which came to be known as the Gallery of the Claviforms. Throughout the cave, 103 animals are depicted on the walls and floors. These include horses, reindeer, and big cats. However, the bison seems to have been the most revered of these animals—composing a total of 40 percent of the animal depictions. In addition, 250 abstract signs and other mysterious figures have been documented by researchers returning to the cave over the decades since its discovery.