Ah, prom. The grand social occasion of the year. The one evening where dreams come true for highschoolers. The first dance with your crush. The amazing dresses and decor. The opportunity to feel special. Or have it all burn down in flames – I’m looking at you, Carrie!

Regardless of how it goes, one thing is for sure – you must look your very best. And this boy delivered! He had a dream when he was 12 of wearing a dress to prom one day. Well, his dream finally came true when he donned a fabulous red gown and made us all say “slay the house down boots Houston I’m deceased!”

Before we dive into the details, dear fashion Panda, tell me – what’s the craziest thing you’d ever wear to prom? Something that still fits the formal theme, yet would stand out in the glitz and glamor of it all. Can’t wait to read your answers at the end, but now let’s dive into the story.

A 16-year-old boy named Korben had long dreamed of wearing a gown to prom. This year, he made it happen and looked fabulous! 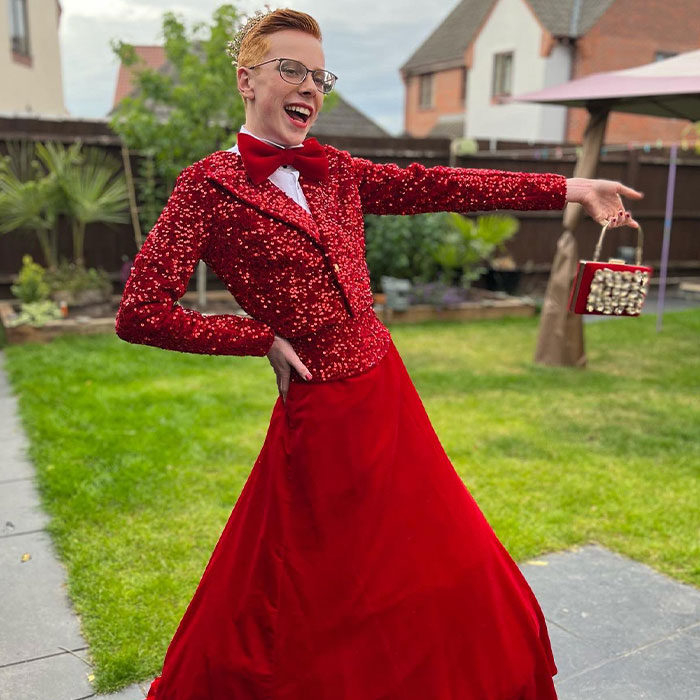 Prom seems to be the Met Gala of highschool. Bored Panda featured a young woman who’d made a dress out of worn-out Harry Potter books just for prom (and looked stunning, btw), and now we’re looking at a 16-year-old boy named Korben, who chose to wear a fabulous sequined jacket top and a complementary voluminous skirt. To accompany the look, he added a red oversized bowtie, red lipstick, and a sparkling crown.

What shone brighter than all the sequins combined was his beautiful smile and persona. He couldn’t have been happier to express himself and his style! His classmates and the staff at Sancroft High School in Norfolk, England, cheered him on, and his mom, Nina Green, shared the fabulous look in a now-viral tweet, gathering 127.5K Likes.

He donned a Billy Porter inspired ensemble of a red sequined jacket top, a complementary voluminous skirt, red lipstick, and a sparkling crown 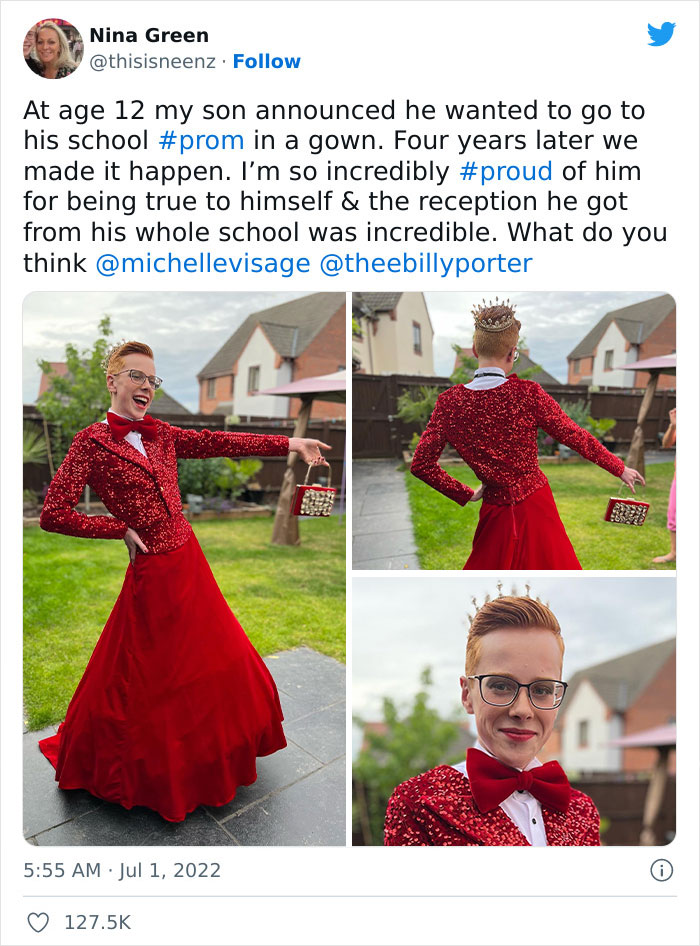 The boy has been wearing dresses since he was four, and at 12-years-old, Korben dreamed of one day wearing a gown to prom. Four years later, his dream came true. Korben told ITV that it was very important, not only for his own self-expression but to inspire others as well. 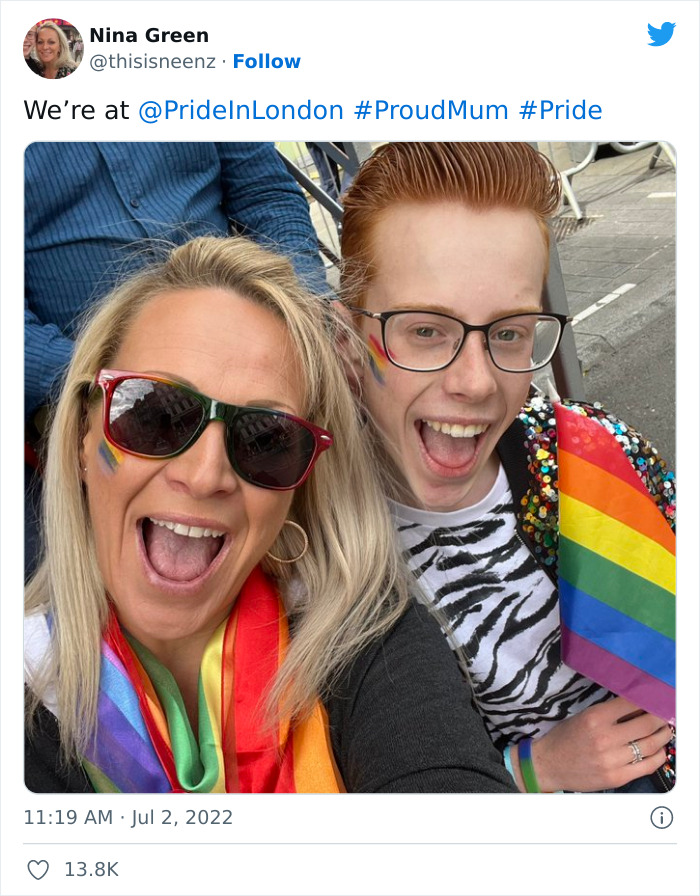 Korben received nothing but praise from his peers upon arriving at prom. “As soon as he got out of the car, everyone just cheered and I was crying, some of the teachers were crying, because he was being who he wanted to be,” his mom recalled. “Everyone has been very supportive, and his year group has been incredible.”

Nina told the BBC: “He wants to go as himself, while expressing his feminine side – with a tuxedo on the top and a dress at the bottom. […] He wanted to be Korben… but in a dress.” She explained to ITV that “I just wanted to show other parents that it’s OK to support your children and allow them to be them. I’ve always believed that if you let your children be who they really want to be and need to be you’ll only get the best out of them.”

“I didn’t want to not be me,” the boy said. Upon seeing Korben, his peers and teachers erupted in cheers, with some even wiping away tears 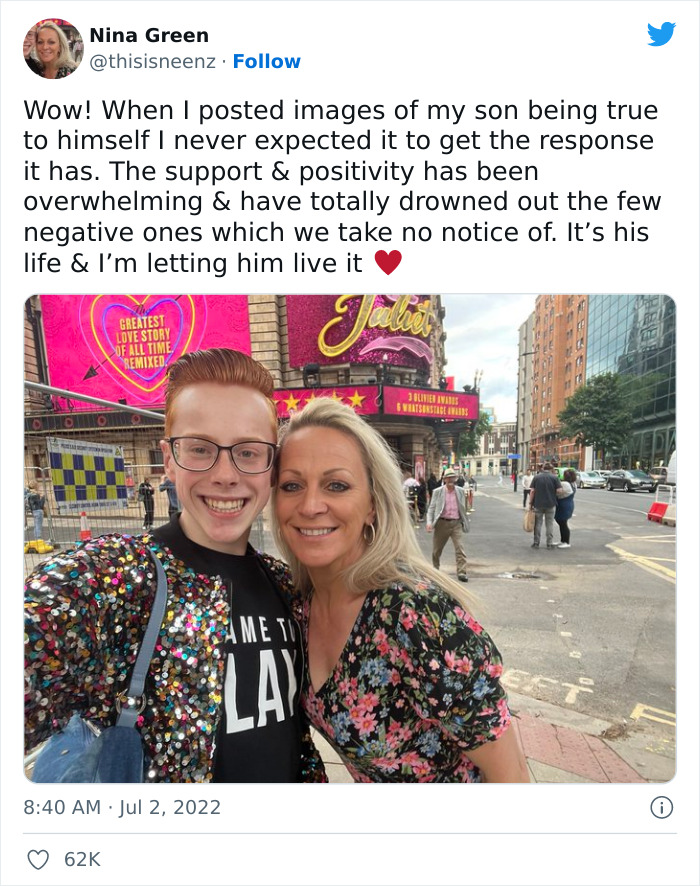 The inspiration for the design came from one of his idols, Billy Porter, an American actor, singer, and writer, whose style has been breaking barriers on red carpets for years. As stylist Sam Ratelle told Variety, when they create looks with Billy, they “always look to blur the lines between masculinity and femininity.”

Emilia Bergoglio argues that we should completely remove the association of certain clothing with a specific gender and instead accept people wearing whatever clothing they want.

They believe that “clothes are just clothes and are only a proxy of expression – they don’t have any gender of their own separate from the wearer.” In practice, this would mean simply letting go of womenswear and menswear labels and expanding sizing to cater to more people.

His mom, Nina Green, tweeted photos of him in his ensemble, and they went viral, with some of his idols, including Michelle Visage, taking notice 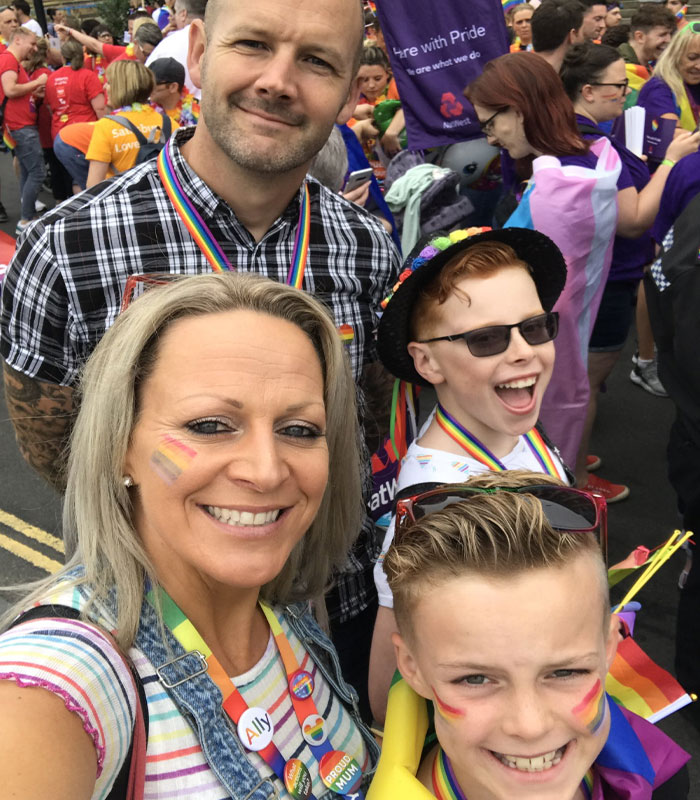 The vast amount of love and support the boy received on Twitter was beyond anything they imagined. Nina just wanted to show her son “living his best life” and share what it looks like when someone is allowed to live their truth.

The photos even reached RuPaul’s Drag Race star Michelle Visage, another of Korben’s idols, who tweeted: “You are an amazing beautiful mom and your child is a STAR.” The young boy also performs in drag and is known as Miss Frou Frou, thus the moment meant a lot to Korben.

“When I showed Korben the retweet he was absolutely blown away,” Nina said. They were headed to the London Pride when notifications started piling up. Someone even identified Korben from the tweet, coming up to him to say: “Are you the boy in the red dress? I think you’re amazing.” 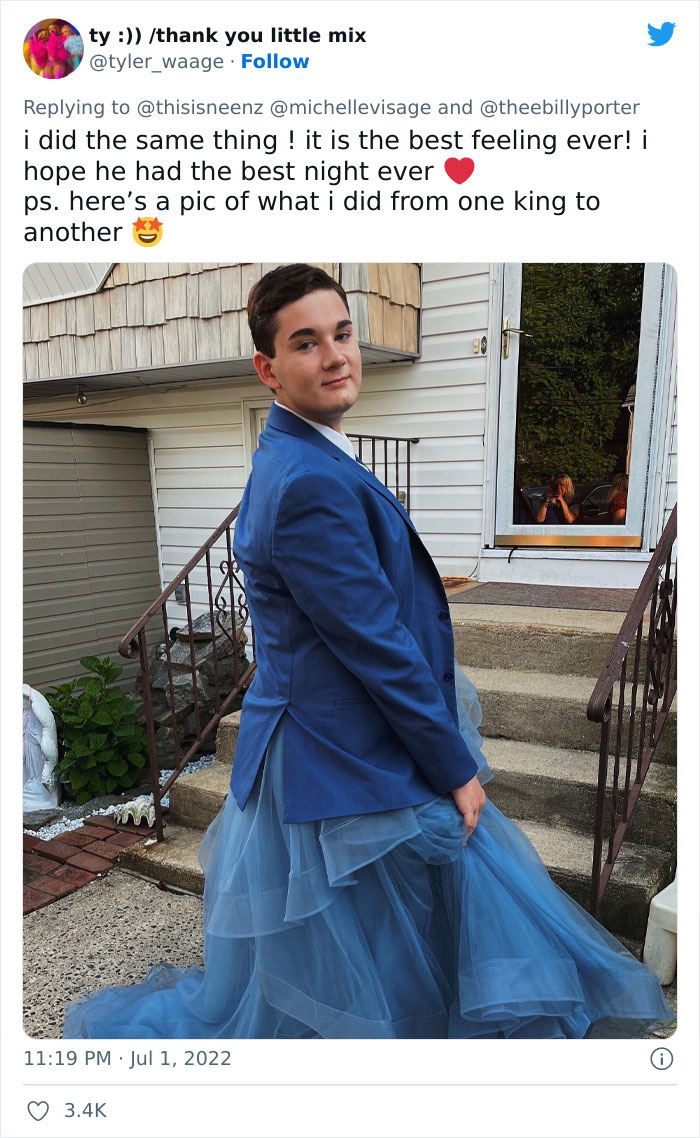 Not only has the tweet showcased Korben’s style, but also plenty of others’, as parents started sharing pictures of their kids breaking long-standing rules. Girls were wearing suits, while some other boys were wearing skirts and dresses.

On his own Twitter account he thanked everyone for their kindness and support, saying: “Oh my goodness… the amount of love… THANK YOU!! Thank you to everyone who is not only supportive of me but supports the LGBTQIA+ community! Thank you for spreading love!” 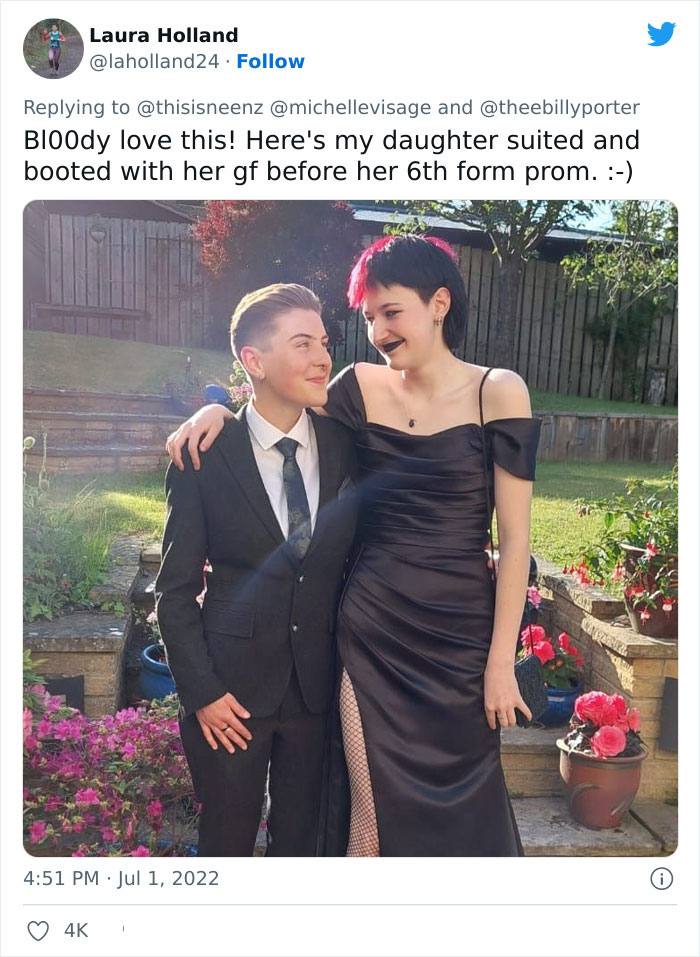 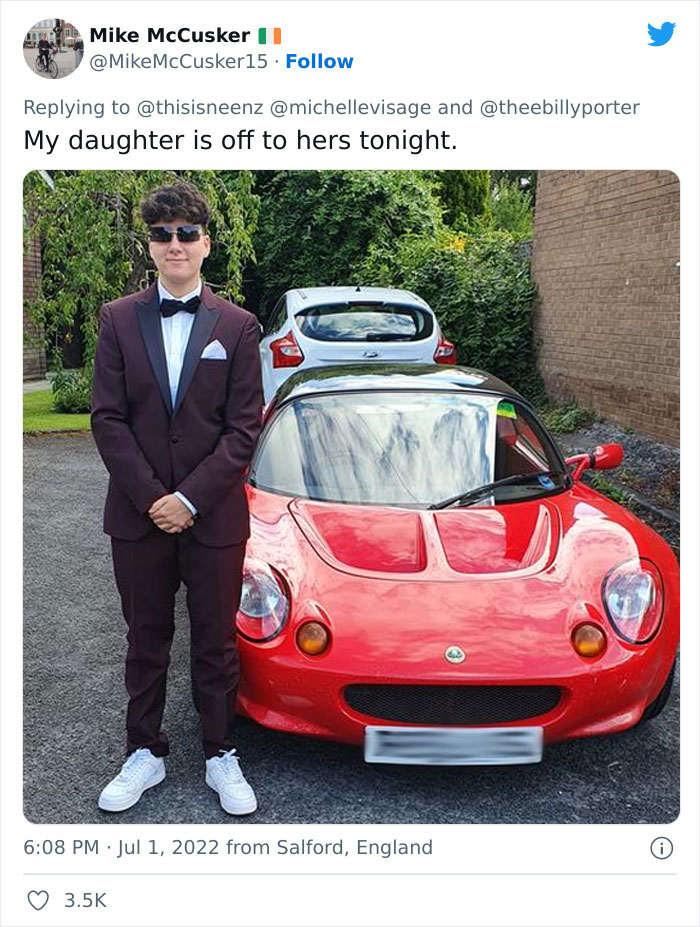 The tweet has grown into something special, and Nina hopes that “it will help others be more accepting and show parents they can celebrate their children” 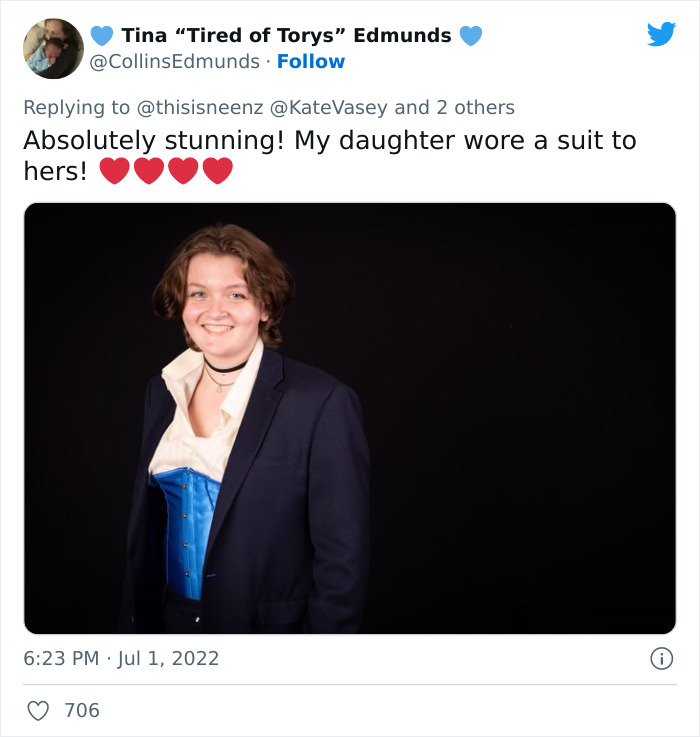 Of course, there were those who were not as appreciative or supportive of Korben. Thankfully, the boy has a lot of confidence and a strong support network of people that have his back.

“I’m very lucky because I do have a lot of confidence and I’ve got thick skin,” he said, laughing at the immaturity and ignorance out there. “It is a shame and my heart goes out to those people. We should be educating people to make sure they understand what they’re saying and why it may not be correct.” 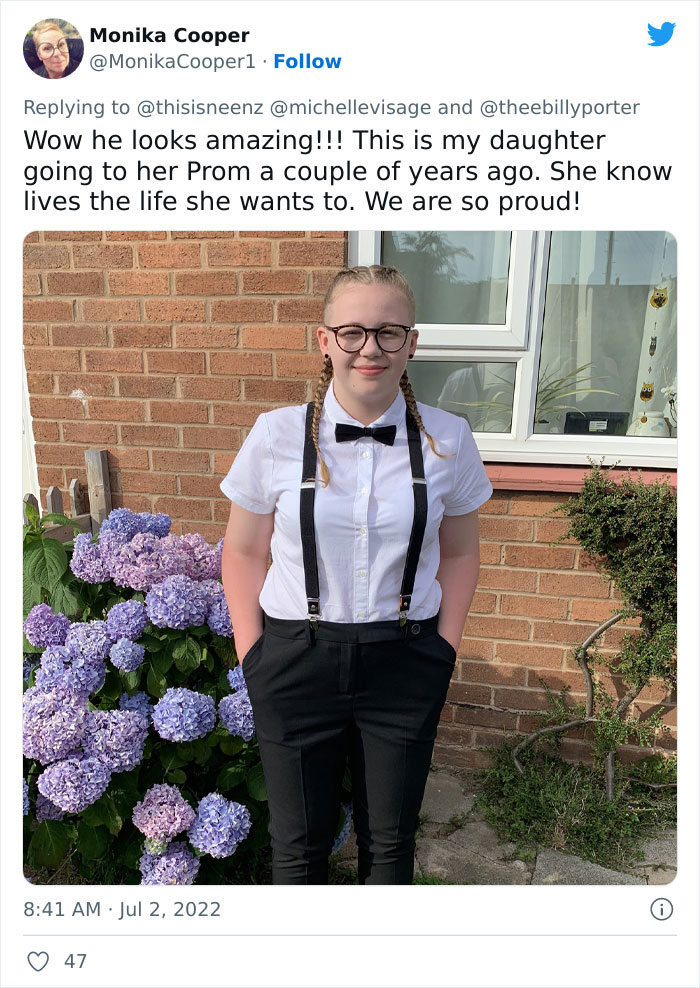 His mom expressed the importance of flying the pride flag “for people who don’t get the support he does” and hopes that the world becomes a better place for all LGBTQ+ people.

“I really hope it will help others be more accepting, let proud parents feel they are not alone, and that they can celebrate their children, and for young people to know there is a network there if they need it. You need to accept your children for who they are.”

We wish Korben all the best and can’t wait to see him modeling more amazing pieces of clothing! 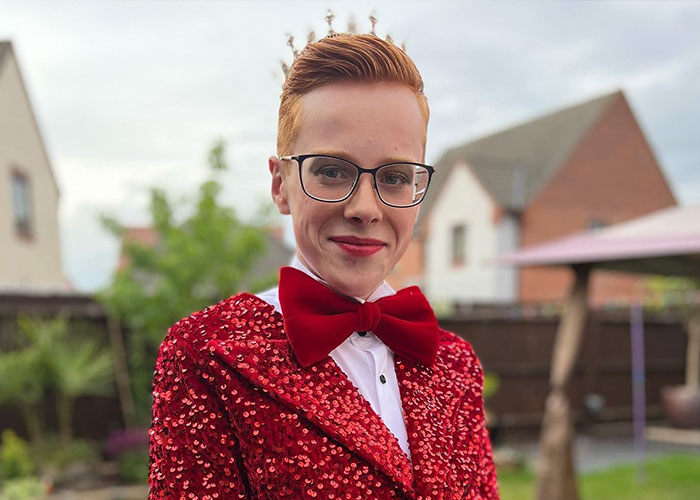 Fashion goes hand in hand with personal expression. It’s supposed to make us feel comfortable and confident, while also allowing us to showcase our individuality. As research and the experiences of countless gender-nonconforming people show, sex and gender aren’t perfectly binary, so why should clothes be?

We wish Korben the best of luck in life and hope to see him modeling more fabulous pieces of clothing! Let us know your thoughts on the gown in the comments below, as well as your answer to the question posed at the very beginning of the article! I shall wish you a fab day!

Thousands of people have come forth to show their appreciation and love. Let us know your thoughts and what you wore, or will wear, to prom yourself! 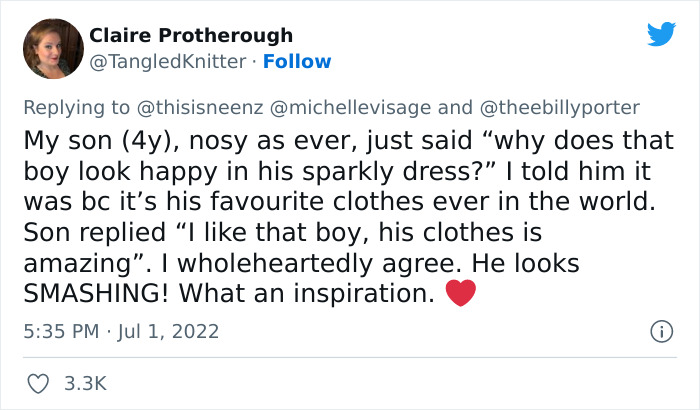 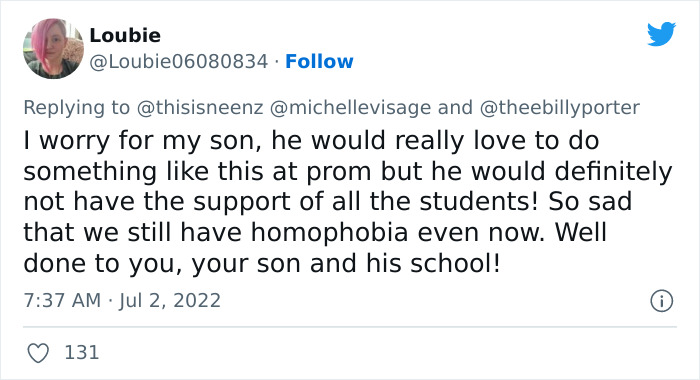 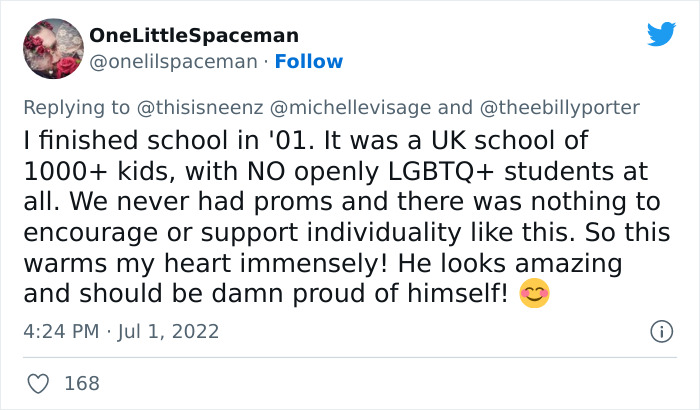 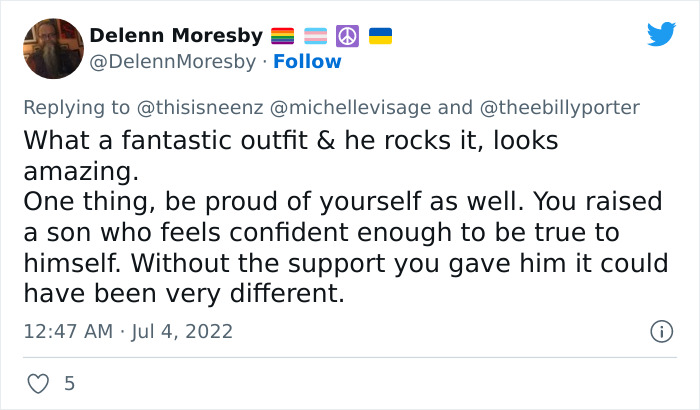 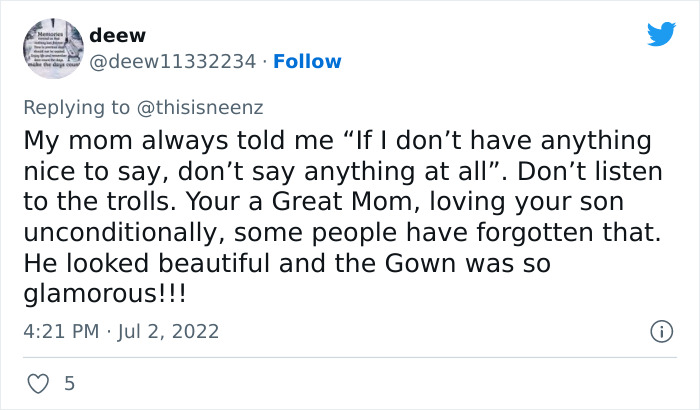 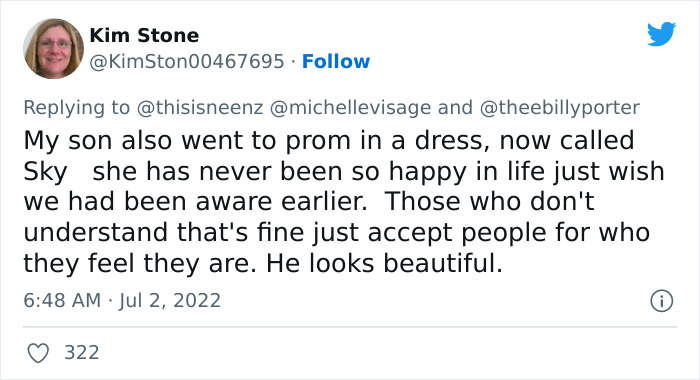 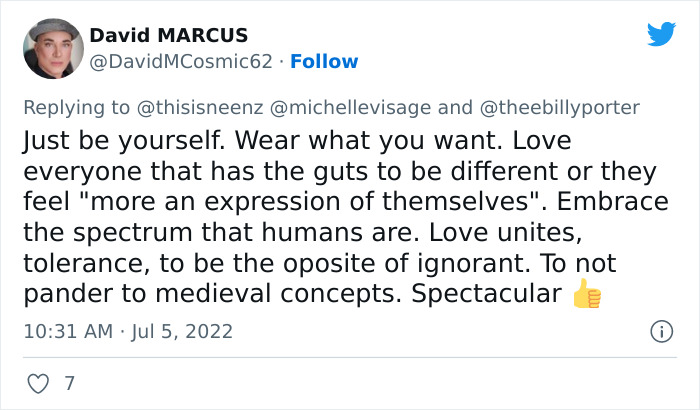 The post 16-Year-Old Boy Goes Viral After Fulfilling His Dream Of Wearing A Dress To Prom first appeared on Bored Panda.