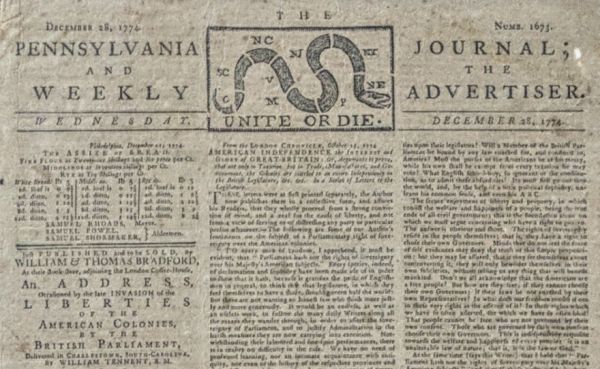 Someone in New Jersey donated a framed old newspaper to Goodwill. It’s an original page of the Pennsylvania Journal and the Weekly Advertiser newspaper, dated December 28, 1774! The articles in it show how angry the American colonists were at the British, and includes an article by John Hancock warning against forces that would divide the colonies.

The framed document was dropped off in Woodbury, New Jersey, and sent to her department, which reviews donations that may be valuable, and lists the best among them on Shopgoodwill.com. Employee Mike Storms did the detective work, guessing it was original given small keyholes at the inside edge of the pages that suggest they had once been bound by string. What’s more, the four pages were preserved in an old frame with glass on both sides.

A representative of a New York auction house estimates the newspaper’s value at between $6,000 and $16,000. Read more about its contents at NJ Pen. -Thanks, WTM!

In Baltimore, Generations Traces a Lineage of Abstraction Among Black Artists