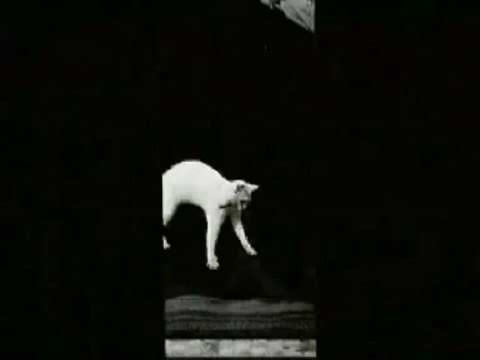 Étienne-Jules Marey was a cardiologist and a scientist, but he ended up being a pioneer in photography and cinematography, too. Marey was always looking for data, and to get it he invented several instruments to measure heartbeats, muscle movements, respiration, and other physical phenomena. He studied movement in animals as well as humans, and once posited that a galloping horse had all four feet off the ground at one point in its stride. The arguments that ensued from this opinion led to Edweard Muybridge’s famous 1878 film of a horse galloping.

Marey developed the chronophotographic gun in 1882, which could capture 12 images per second, overlaying them in one picture, in order to study movement.

One of Marey’s more famous studies was one in which he declared that falling cats always landed on their feet. Did no one notice this before? Or was it just that Marey could prove it with his chronophotographic gun? Marey’s 1894 photographs of a falling cat were easily assembled into a one-second film, or later video, of a cat falling, and in the last frames expressing his indignity at such an experiment. If only Marey could see how far cat videos have come in the 128 years since. -via Nag on the Lake