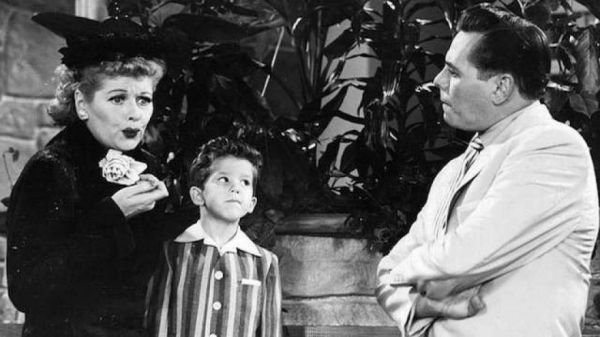 I Love Lucy was a groundbreaking TV show in many ways. It ran from 1951 to 1957, and is the oldest show in syndication because it was recorded on 24mm film and then broadcast, so good copies of 180 episodes are available all these years later. Let’s learn some more about I Love Lucy.

1. CBS DIDN’T THINK AMERICANS WOULD BUY THAT LUCY WAS MARRIED TO A “FOREIGN” MAN.

When CBS approached Lucille Ball with the offer of turning her popular radio show My Favorite Husband into a television show, she was agreeable with one condition: that her real-life husband, Desi Arnaz, would be cast in the role of her spouse (played on the radio by Richard Denning). The network balked—there was no way that American viewers would accept average housewife Liz Cooper (her character’s name on the radio series) being married to a “foreign” man with an indecipherable accent. Never mind the fact that Lucy and Desi had been married more than a decade; such a “mixed” marriage was unbelievable.

2. LUCY AND DESI HAD TO TAKE THEIR SHOW ON THE ROAD TO CONVINCE THE NETWORK BRASS.

Arnaz had a successful career touring the country with his rhumba band, which was one of the reasons Lucille wanted him to get cast as her TV husband—to keep him off the road and close to home. In an effort to show the network (and potential sponsors) that they could work together as a comedy team, they crafted a sort of vaudevillian skit that was inserted into the middle of performances by the Desi Arnaz Orchestra during a tour in the summer of 1950. The audiences roared over Lucille’s antics and her interaction with Desi as she interrupted his band’s concert confusedly, cello in hand, thinking she had an audition scheduled. The “Professor” skit not only convinced the network powers that be that the couple could, in fact, be convincing as husband and wife—it also was such a hit that it was incorporated into episode six of I Love Lucy’s first season.

We also get some trivia about our favorite episodes, like the grape-stomping, the chocolate-dipping, and Vitameatavegamin, in a trivia list about I Love Lucy at Mental Floss.