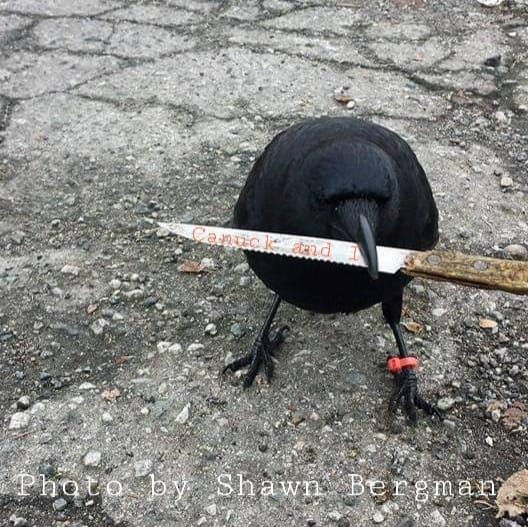 Humans have laws that govern our interactions with others. Animals don’t, but since they live with and among us, they sometimes get involved in human crime. Sometime they are the perpetrators, and in a few cases are treated as one: jailed, put on trial, fined, or otherwise punished. Sometimes they are unwitting accomplices. Sometimes an animal can be a witness to a crime, or even the evidence that solves it. And at least once, a bird got right in the middle of a human crime scene.

In Canada, police had the opposite problem: Instead of dealing with an animal who fled the scene of the crime, they had to deal with one who wouldn’t leave their crime scene alone. A bird believed to be a crow named Canuck had already earned a reputation as a beloved troublemaker in Vancouver. In 2016, his antics got him in a tussle with the law. When police were dispatched to a car fire, they encountered a man wielding a knife. Canuck, who had been spotted sitting on the burned car, scooped up the knife and flew away with it. A cop had to chase him for a bit before the bird finally dropped his shiny evidential treasure.

So, did the bird save the day by stealing the knife, or was he tampering with evidence? The original account makes it clear that the police had already arrested the perpetrator and Canuck then made off with the evidence. This is just one of 25 stories of animals involved in real crimes that you can read about at Mental Floss. Or if you prefer, you can watch a video at the same link.