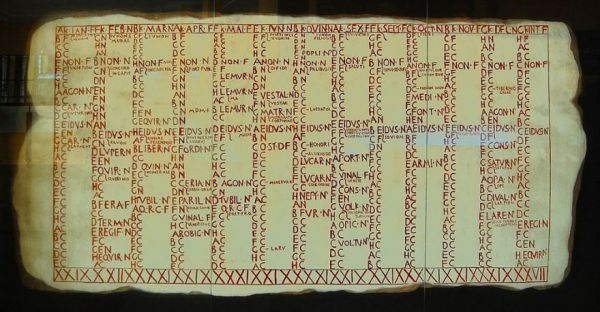 Imagine trying to figure out a calendar from scratch, in which one could keep track of the days of the year, year after year. It’s such a difficult project that what really happened was that every few hundred years we figured out what the problems with the existing calendar were and started over again to correct them. Today we use the Gregorian calendar, which takes into account that a year is 365.25 days and 11.5 minutes long. Before that, there was the Julian calendar, which didn’t account for those 11.5 minutes, and before that it was the Roman calendar that didn’t have much consistency from year to year at all.

The Julian Calendar itself was created by Julius Caesar in 46 BC in order to fix the inherent errors of a lunisolar calendar, which the Roman calendar was. The Roman calendar consisted of 12 months for a total of 355 days, which is approximately 10 days shorter than the solar year. In order to catch up with the sun, the Roman calendar added either 22 or 23 days to every alternate year, the same way we add leap days every four years. As a result, Roman years alternated between 355, 377 and 378 days.

To make matter worse, the leap days (also known as the intercalary period) were not added in a regular and systematic manner, but was determined by the Pontifex maximus, the high priest of the College of Pontiffs. Often the Pontifex would abuse his power and lengthen a year when his political allies was in office, and reduce it when his opponents were in power. The net effect of this was that the average Roman citizen often did not have a clue what date the current day was.

The Julian calendar offered some consistency, but it wasn’t an easy transition. Read about the shenanigans involved with changing a calendar at Amusing Planet.