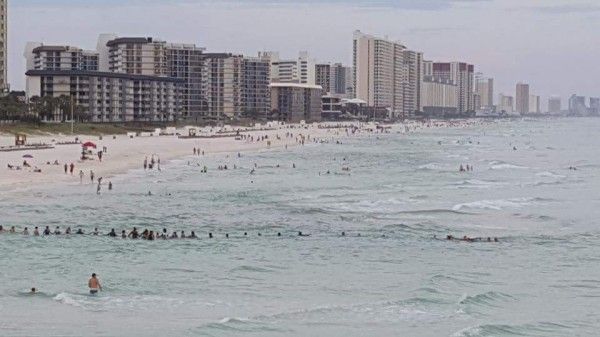 Two young boys, Noah and Stephen Ursrey, were caught in a dangerous riptide off the beach in Panama City, Florida, on Saturday. Several beachgoers went out to retrieve them and were also caught by the current. Four members of the boys’ family also went out and were unable to return. Other beachgoers took things into their own hands and formed a human chain of around 80 people to reach the stranded swimmers. Jessica Simmons and her husband Derek swam out to the end of the chain to reach the Ursrey family and the others.

As Simmons paddled, the human chain grew, with 80 people stretching over 100 yards out to the distressed swimmers. Some of them couldn’t swim, Simmons said, but wanted to help and stayed in the shallows. Others stood in water up to their necks, waiting for Simmons and her husband to cover the last few feet so they could pass the swimmers to shore.

“I got to the end, and I know I’m a really good swimmer,” Simmons said. “I practically lived in a pool. I knew I could get out there and get to them.”

What Simmons found at the end of the human chain, she said, was shocking. Ursrey’s mother was exhausted, her eyes were rolling back and Simmons remembered her “drinking so much water” and “telling us to just let her go and save us.” Everyone was exhausted, the waves knocking them under. One by one, starting with the children, Simmons and her husband, along with a few other rescuers, towed the swimmers to the human chain, who then pulled them all to shore.

All ten people were pulled out of the water, and the human chain retreated together. Barbara Ursrey, the boys’ grandmother, suffered a heart attack and was taken to a hospital where she is recovering.