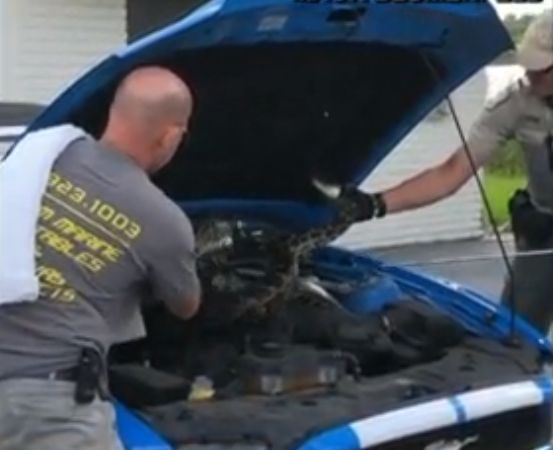 Uh, surprise? Imagine the shock the owner of this Ford Mustang felt when he opened the hood of his car and found a new addition to his car’s interior: a massive Burmese python! Thankfully, no one was hurt from the surprise encounter, as officials from the Florida Fish and Wildlife Conservation Commission responded quickly to remove the 10-foot-long reptile, as KTLA details:

Pythons are an invasive species in Florida and are found largely in south Florida and in the Everglades. Burmese pythons are native to Asia, from eastern India through Vietnam and southern China.

The Burmese python population in the state is believed to have been created in part by escaped or released pets.

FWC officials say the snakes are a threat to native wildlife as predators and also competition for food. A 2012 study found that the most severe decline in native species happened in the southernmost region of the Everglades National Park, where marsh rabbits, cottontail rabbits and foxes “effectively disappeared,” according to the USGS. The raccoon population fell by 99.3%, the opossum population by 98.9% and the bobcat population by 87.5%.