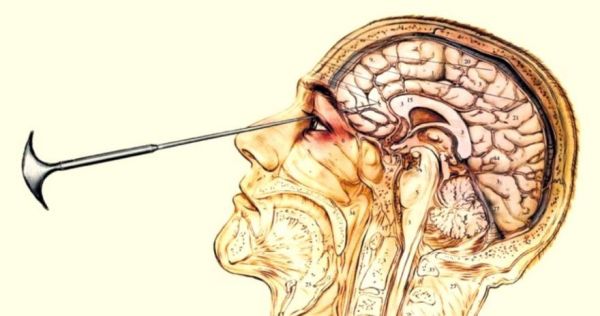 In 1948, there was a demonstration of two competing techniques for severing the prefrontal cortex in the human brain. In other words, lobotomies. The participants were two of the more prolific lobotomists of the day: William Beecher Scoville, who opened the skull to access the brain, and Walter Freeman, who developed the method of going through the eye socket with an ice pick. Dr. Scoville’s grandson Luke Dittrich later published a book that examined the case of Scoville’s most famous patient (known as H.M.), and along the way divulged some family secrets. Scoville’s wife, Emily Barrett Learned, discovered her husband was having an affair, and was so distraught that she became a psychiatric patient and underwent a series of horrific treatments common at the time.

Emily received many of these so-called treatments, to little effect. Her unsympathetic psychiatrist commented that her husband’s infidelity “has upset her to an unusual degree,” and her case notes reveal someone frightened of the ECT and still in the grip of psychotic ideation. Her subsequent release seems a bit mysterious. She was henceforth withdrawn and rather lacking initiative, a pattern that makes more sense when we learn, in the book’s closing pages, that Dr. Scoville had personally lobotomized her. One of the many poignant scenes in Dittrich’s book is his recital of a Thanksgiving dinner at his grandparents’ house, during which Emily sat silently amid her family while her ex-husband and his new wife (a younger, more attractive model) presided over the proceedings.

This excerpt from the new book Psychiatry and Its Discontents doesn’t quite encompass the entire history of the lobotomy, but it highlights some of Dr. Scoville’s most famous patients and the cruel state of medical treatment that gave rise to the lobotomy. -via Nag on the Lake

Rating A Brief and Awful History of the Lobotomy is 5.0 / 5 Votes: 1
Please wait...
Loading...
Related articles