Unlike some municipalities, the city of Boise, Idaho has informed their residents that not all plastics can be thrown into the recycling. As of three years ago, Boise residents have been asked to separate #4 thru #7 plastics (low-density polyethylene, polypropylene, polystyrene, and “other,” respectively) into special orange garbage bags. Under an initiative called the Hefty EnergyBag Recycling Program, these orange bags were hauled off to a concrete manufacturer, who incinerated the bags and used the energy to power their plant. 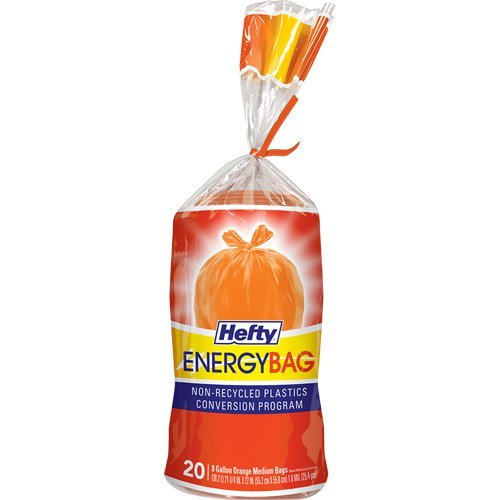 Compliance has been low—Boise State Public Radio reports that just 20% of Ada County residents participated—but it still kept some 30 tons a month out of landfill. And last year, the city found a better use for the unwanted plastic than sending it up a smokestack.

Boise partnered with ByFusion, a Los-Angeles-based processor that uses steam and compression to squeeze the plastic into blocks. These ByBlocks are 8″x8″x16″, the same dimensions as a standard concrete block, and they have the same R-value. However, ByBlocks are about 10 pounds lighter each, and also have Lego-like protrusions molded into their tops and cavities in their undersides. They can be directly stacked or stagger-stacked with the protrusions registering in the cavities of the block above. 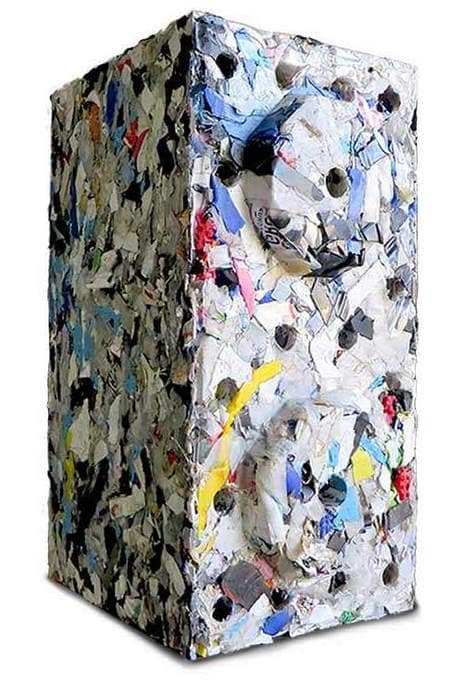 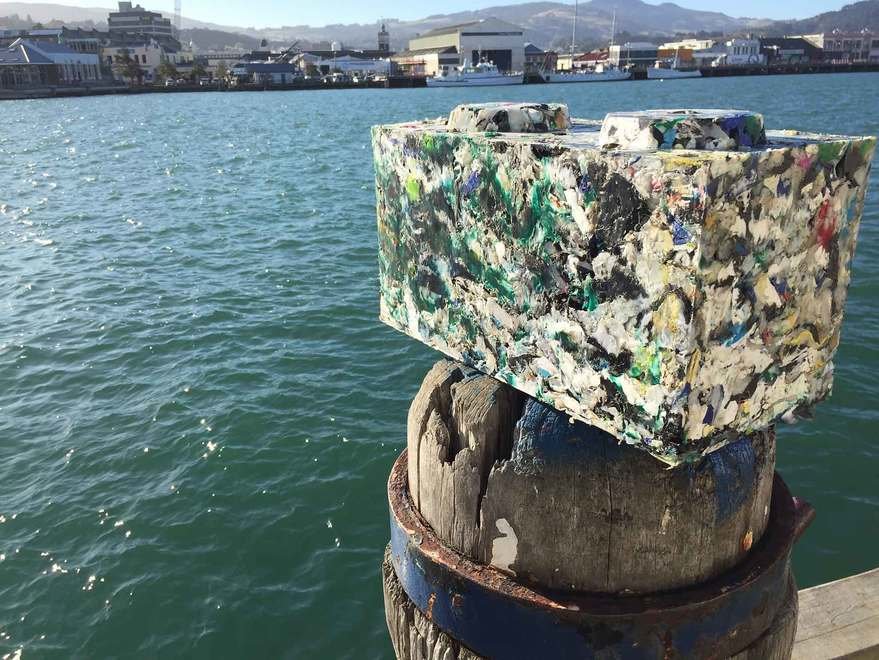 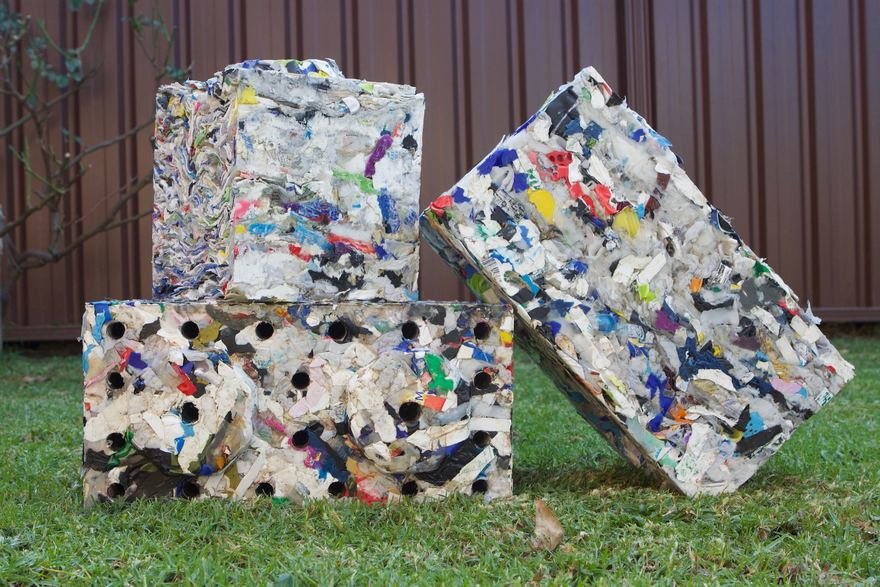 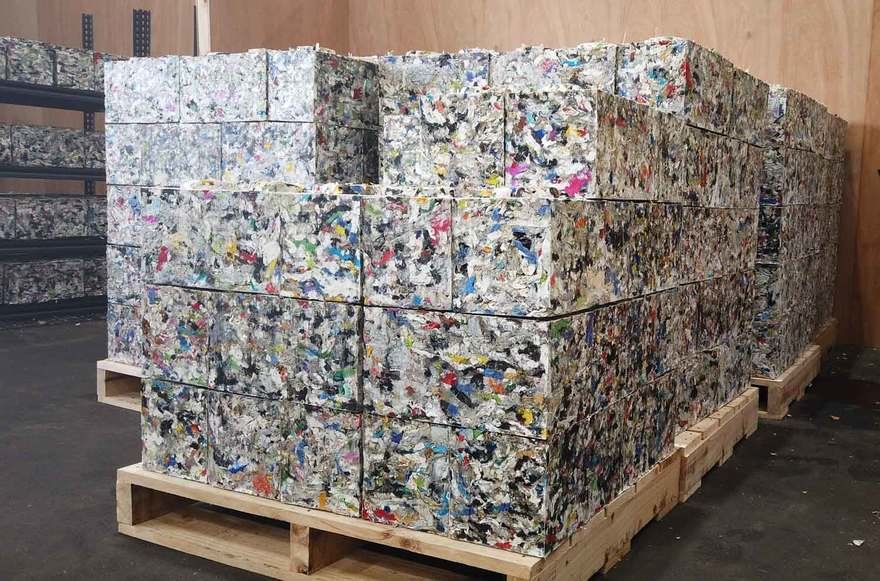 ByFusion describes their process as carbon-neutral, and says no chemicals, additives, adhesives or fillers are used. Additionally, the plastic is not melted; 30 tons of plastic yields 30 tons of ByBlocks. The surfaces of the block aren’t smooth, but they are flat; drywall, siding and tile can all be applied to it. 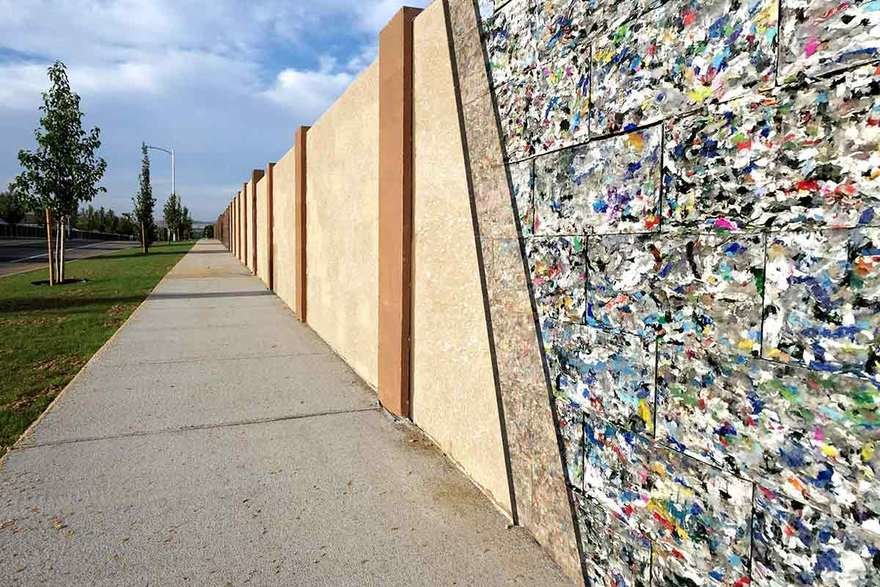 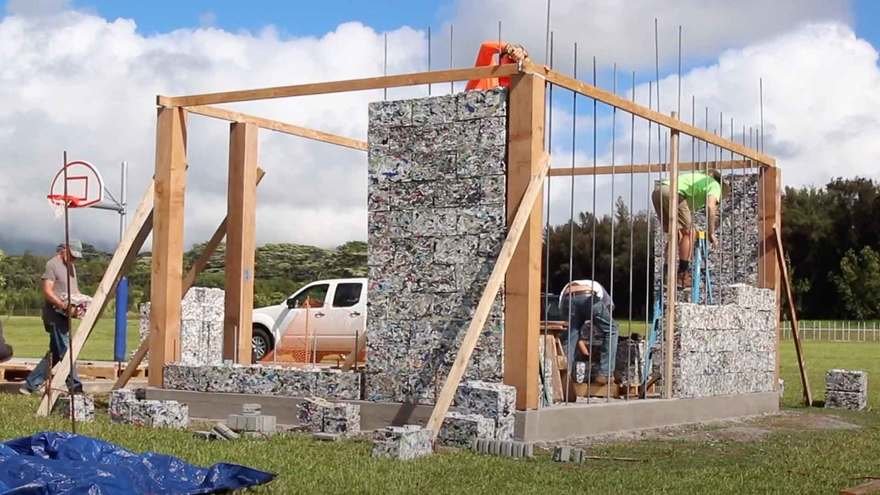 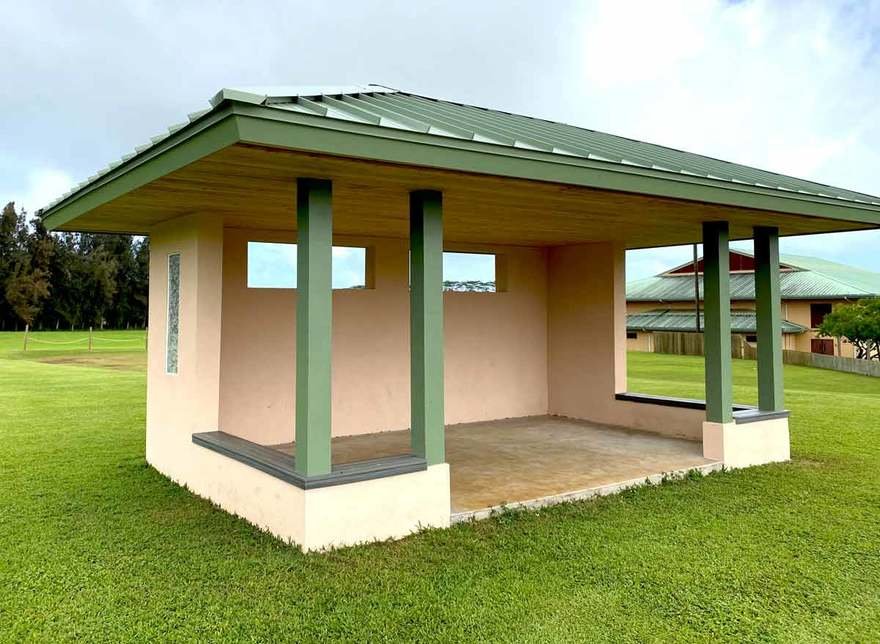 Best of all, the plastic doesn’t have to be sorted or washed prior to being processed. (It is the expensive sorting out of contaminants heedlessly thrown into the mix by careless consumers that can derail other types of plastics recycling.) 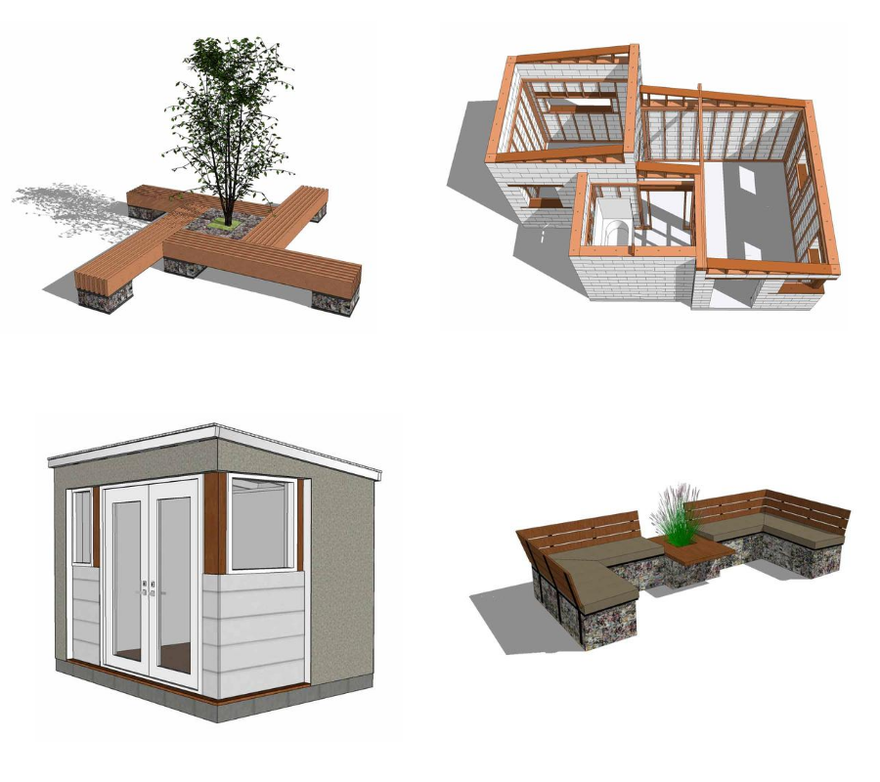 ByBlocks have been used to create a bench in Boise’s Manitou Park: 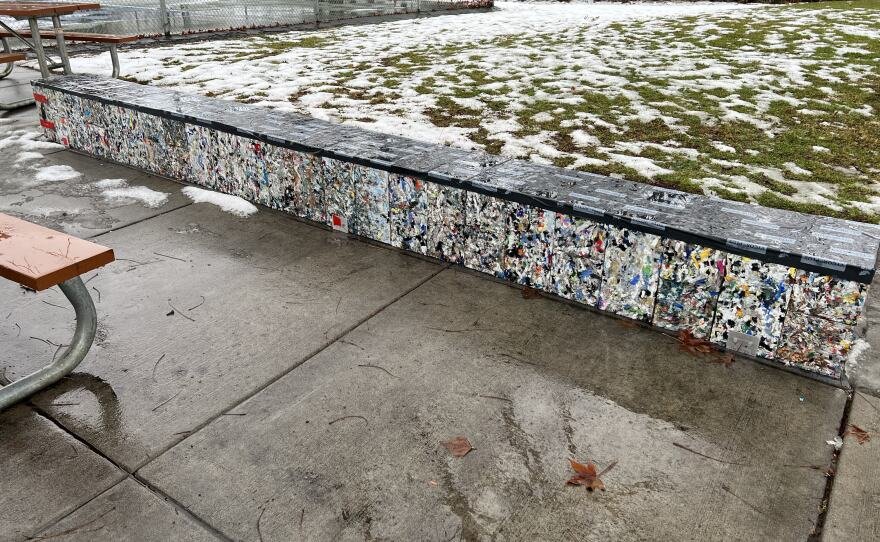 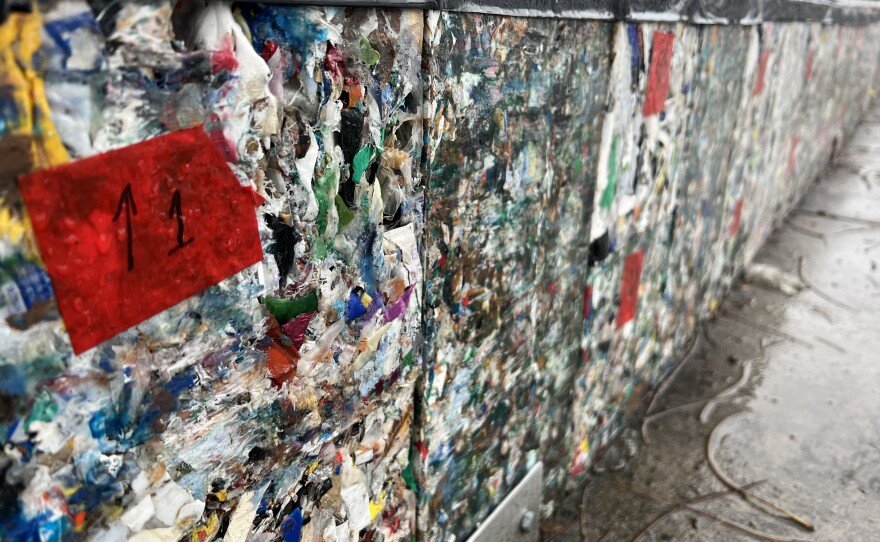 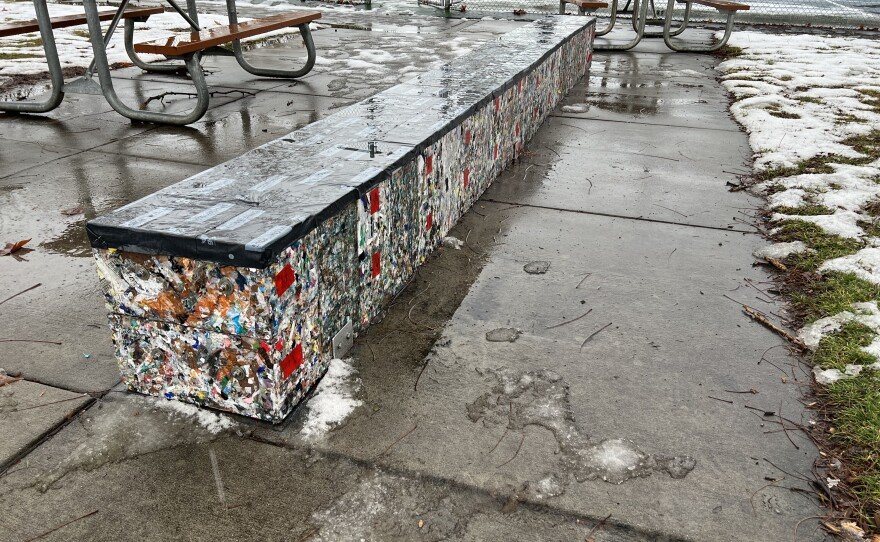 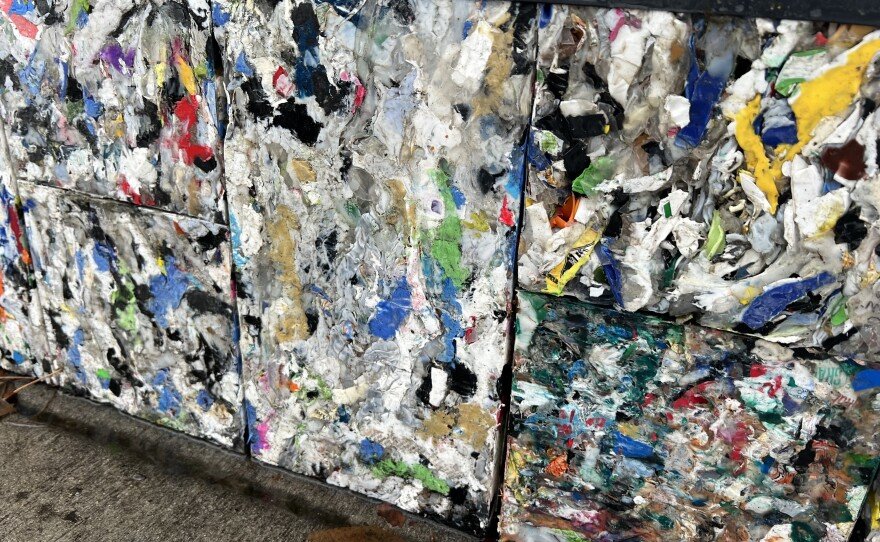 Here’s a build demonstration where the ByFusion team erects a shed and clads it. As you can see, there is some mess—because the blocks are not sealed, they tend to shed plastic bits during the construction. On the flip side, they’re a lot easier to cut into for running electrical than concrete is: