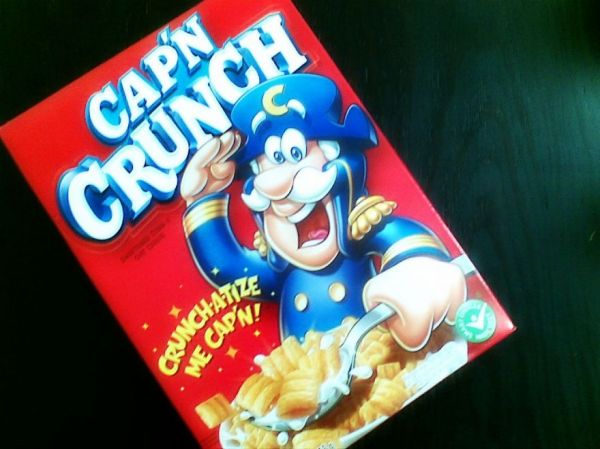 Think of Cap’n Crunch, and you most likely think of scratching the inside of your mouth when eating the cereal. However, the mascot himself has a fascinating story. He’s even older than the cereal he promotes! But there’s a dark side to the Cap’n: a controversy over his actual rank.

As for the Cap’n, one might assume that a great deal of research went into designing the saccharine sailor’s uniform, but they would be incorrect. The U.S. Navy follows a strict code defining how uniforms are to reflect rank. The most readily apparent way for the general public to identify a captain would be the number of stripes displayed on an individual’s sleeve. Per regulation, captains wear four stripes, commanders three, lieutenants two, and ensigns one, with additional thinner stripes for grades between. This is where the question of Mr. Crunch’s proper rank becomes uncertain. Over the years, he has variously appeared with anywhere from one to three stripes. Even when apparently serving as Ensign Crunch, however, he has continued to erroneously make use of the title Cap’n.

There were so many questions about the Cap’n’s rank that the U.S. Navy even got involved. But there’s more, like the roundabout way that Cap’n Crunch led to the founding of Apple Computers, all of which you can read about at Today I Found Out.