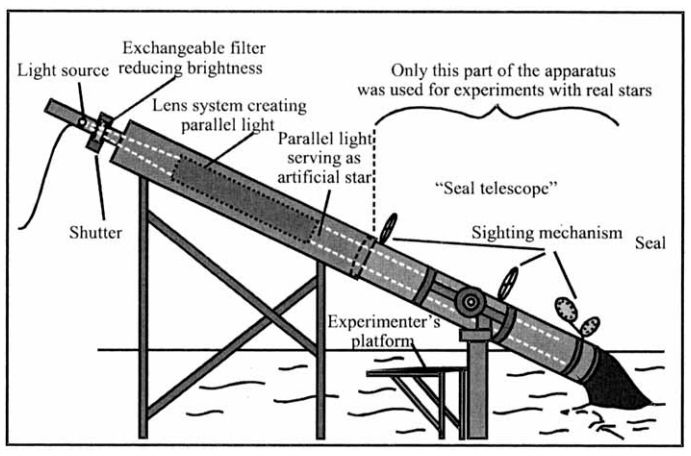 Like European swallows and coconuts, harbor seals migrate. But how do they know where to go? Navigating by the stars (astronavigation) may be possible, but harbor seals have limited vision even while above the surface of the water, let alone below it.

This quandary inspired scientist Björn Mauck and his colleagues to create a hollow tube that would control seal access to seeing stars. They trained the seals to examine the starry night sky through this tube, then displayed star-like dots of light. Were the seals able to see them? According to their 2005 paper, some celestial bodies are bright enough to make astronavigation a hypothetical possibility:

Experiments with Venus and Sirius showed that our harbor seal could see these bright heavenly bodies. However, due to varying background brightness of the night sky and due to being sometimes partly occluded by high clouds, these “stars” in fact did not represent stimuli of constant intensity. Furthermore, it was sometimes difficult to decide whether or not another star had come into the seal’s view when the seal reacted. Therefore, a false-alarm rate was not determined for these experiments and detection rate for Venus and Sirius might be contaminated by an undefined rate of spontaneous reactions. Results of these experiments therefore demonstrated the seal’s capability to see some real stars, but had to be confirmed by tests with stimuli of reproducible and constant intensity. This was done in the experiments with artificial stars, which showed that our harbor seal detected the light emitted from celestial objects as faint as 4.4 stellar magnitudes.

The Bell Cemeteries of World War 2