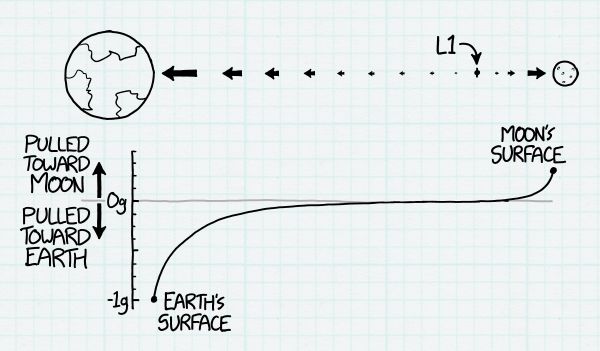 Randall Munroe received a question from a 5-year-old and tackled it in excruciating detail on his site What If?

We can picture what the child was thinking, but to be quite accurate, Munroe first had to go through the reasons we can’t install a fire pole between the earth and the moon. Then he discarded those reasons in order to answer the question about a fire pole that existed anyway. The first problem is that if you are standing on the moon, you have to go up the fire pole first.

Unfortunately for you, space is big, so “pretty close” is still a long way. Even if you climb at better-than-world-record speed, it will still take you several years to get to the L1 crossover point.

But that’s when the fun starts! As you let gravity take you down to earth, you have to deal with increasing speed, friction, weather, and the movement of the earth. I hope you brought your parachute. Munroe’s highly-detailed answer probably won’t be a lot of fun for a 5-year-old dreaming of space travel, but for we nerds who enjoy his xkcd comics, it’s a pretty cool story. -via Metafilter