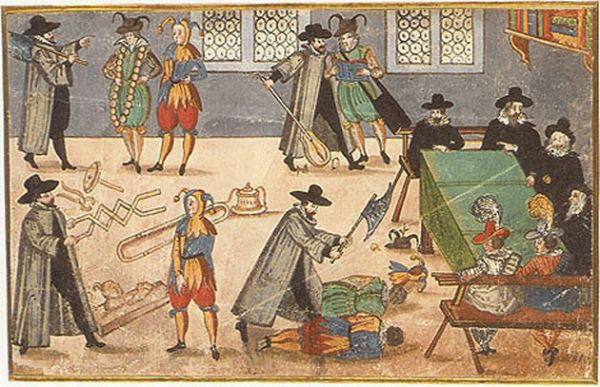 In 15th-century Europe, hazing new students wasn’t just a custom, it was mandatory and inflicted by the administration. The purpose was to rid new students of their “their pride, gluttony, and other sins.” In other words, to take them down a notch. Only then were they deemed ready to learn. One of the worst hazing rituals took place in Germany in Sweden during the late 1400s. It was called Deposition, and applicants had to go through it before they were even admitted to the university.

Once everyone was ready, the Depositor passed around odd items with which the students needed to adorn themselves: hats, looking-glasses, saws, razors, combs, shears, and clothes “of various patterns and colors.” Fake horns and fake donkey ears were attached to their heads.

The Depositor also asked students to open wide—and he inserted a boar tusk on each side of their mouths. They were expected to hold the tusks in place for the duration of the ceremony. The Depositor then marched them down the hall into a cavernous lecture room—though calling it “marching” is generous. The Depositor, in reality, spurned them forward with a stick as if they were “a herd of oxen or asses.”

Oh, that’s just the beginning. The rituals that followed were designed to frighten and humiliate the students, and eliminate those who weren’t truly dedicated to their education. Read what happened during the rest of Deposition at Atlas Obscura.

This Piano Mixes Cocktails Based on Which Keys You Play

When You Forget to Proofread