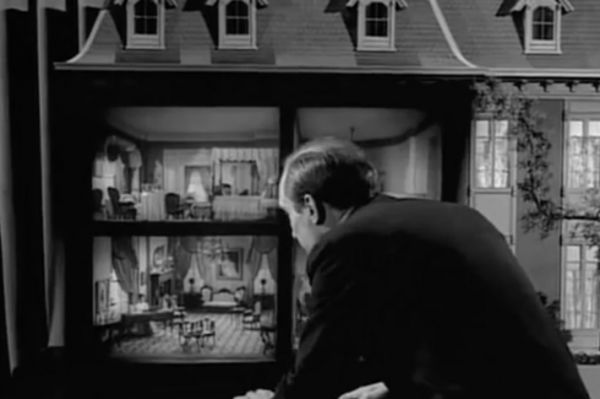 This year, two movies and a TV series prominently features dollhouses. That inspired Gwynne Watkins to look at other dollhouses that have shown up in our entertainment, and that happens a lot more often than I would have guessed. There are 23 of them in this list, mostly from the past twenty years or so, but they go back as far as 1963.

The museum dollhouse in The Twilight Zone
In the Season 4 episode “Miniature,” introvert Charley Parkes (young Robert Duvall) becomes smitten with a beautiful doll in a museum display. After hours of gazing at the antique dollhouse, Charley discovers that his beloved is in an abusive relationship, and he breaks the glass on the display to stop a mustachioed male doll from raping her. It’s The Twilight Zone, so you know where this is going, but the attempted doll-rape definitely sours the happy ending.

The dollhouses are divided into the categories Delightful, Suitably Whimsical, Vague Unsettling, and Definitely Creepy. The Twilight Zone house was ranked as only Vague[ly] Unsettling, so you know they get a lot worse at the bottom of the list. Read about all of them, with plenty of video evidence, at Vulture. -via Digg

Rating A Guide to the Most Delightful -and Sinister- Dollhouses in Pop Culture is 5.0 / 5 Votes: 5
Please wait...
Loading...
Related articles