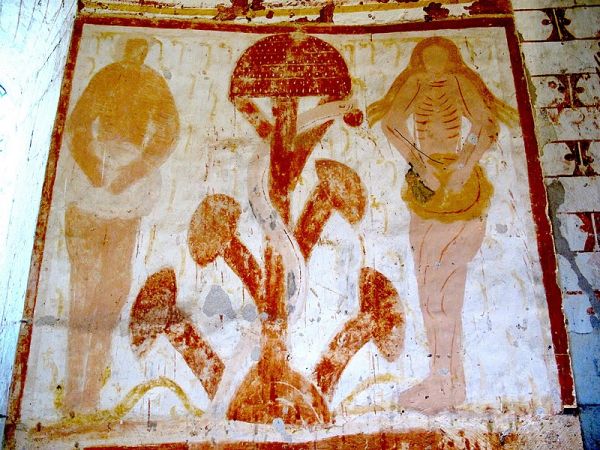 Plaincourault Chapel is a medieval church in France. It holds a 13th-century fresco depicting Adam and Eve in the garden of Eden. Between them is what we generally recognize as the forbidden Tree of the Knowledge of Good and Evil, which Eve ate from and convinced Adam to do so as well. But in this fresco, it looks more like a bunch of mushrooms. Could it have been a hallucinogenic mushroom? After all, a “mind-expanding drug” fits in neatly with an enlightenment we call the knowledge of good and evil.

It’s this tree that has attracted visitors from around the world to the sleepy village of Mérigny, some 200 miles south of Paris. Tourists, scholars, and influencers come to see the tree that, according to some enthusiasts, depicts the hallucinogenic mushroom Amanita muscaria. Not everyone agrees, however, and controversy over the fresco has polarized researchers, helped ruin at least one career, and inspired an idea—unproven but wildly popular, in some circles—that early Christians used hallucinogenic mushrooms.

There are quite a few possibilities attached to this idea. Least likely is that, while the Bible definitely calls it a tree, the oral tradition that the Bible drew from may have included mushrooms in the story. More likely, the 13th-century artist may have surmised that possibility. Or did the early Christians use mushrooms themselves? But does the fresco even depict a mushroom, since the entire painting is stylized? Maybe it was just a poor attempt at a tree. There are plenty of academics who have argued about the fresco, which you can read about at Atlas Obscura.