While the value of money may be ephemeral, the gold that backs it up is assumed to be solid. One installation in Pittsburgh, however, questions whether that gold is really all it appears to be. Currently on display at Woodstreet Art Galleries, David Spriggs’ GOLD is the most recent of his Stratachrome series. A portmanteau of the latin words “strata” and “chrome,” the term refers to the layered color process Spriggs uses to create the works.

GOLD features yellow acrylic paint on sheets of transparent film that are placed in a triangular framework stretching 36′ wide. Spriggs tells Creators that he spray painted each layer by hand in order to create a composition of images reminiscent of the pediment that adorns the New York Stock Exchange (NYSE), except Spriggs’ version is flipped upside down. “It speaks to the widening inequity within the Global Wealth Pyramid and the concentration of excessive wealth and corresponding power into the hands of a select few.” 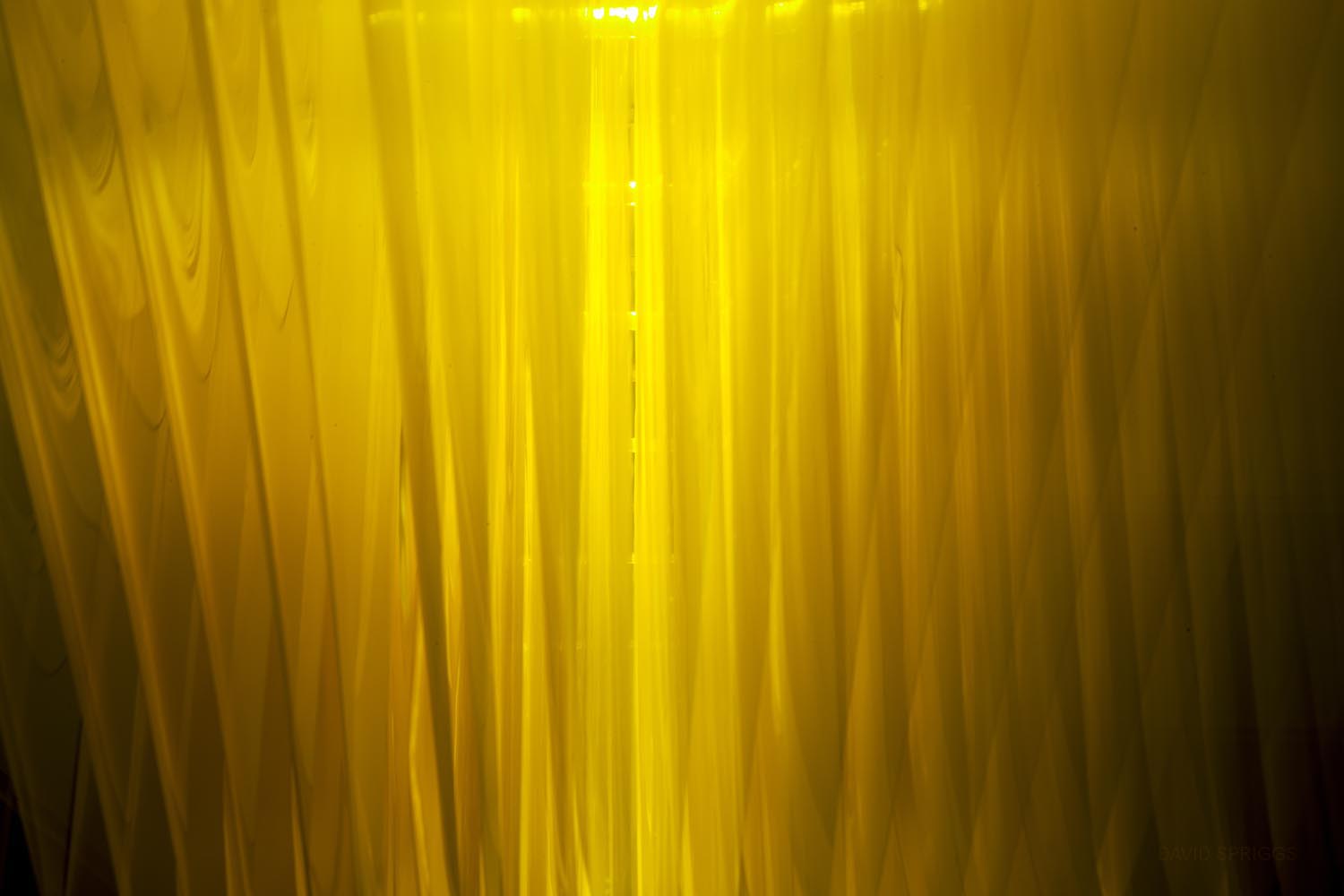 Before creating GOLD, Spriggs made Stratachrome works in green, red, and blue. “Each of the Stratachrome installations are part of the spectrum, and named after its color—I’d like to finish this particular series of work with black and white.” In each of them, Spriggs uses imagery that relates to the cultural meanings associated with the color. “People are obsessed with the color gold, partly because of the sun. So when people discovered gold, it was like discovering the sun in a way,” he says.

When considering what sort of imagery to depict with the color gold, Spriggs says he wanted the work the reference the historic meaning of gold as a material associated with reverence. “It’s almost like you’re witnessing some ancient icon; The Golden Calf.” He ended up thinking about gold in terms of its association with value and currency, which led him to the NYSE. “But now the use of gold has become more immaterial because when you look at the stocks for gold, they’re selling what they speculate is in the ground.” 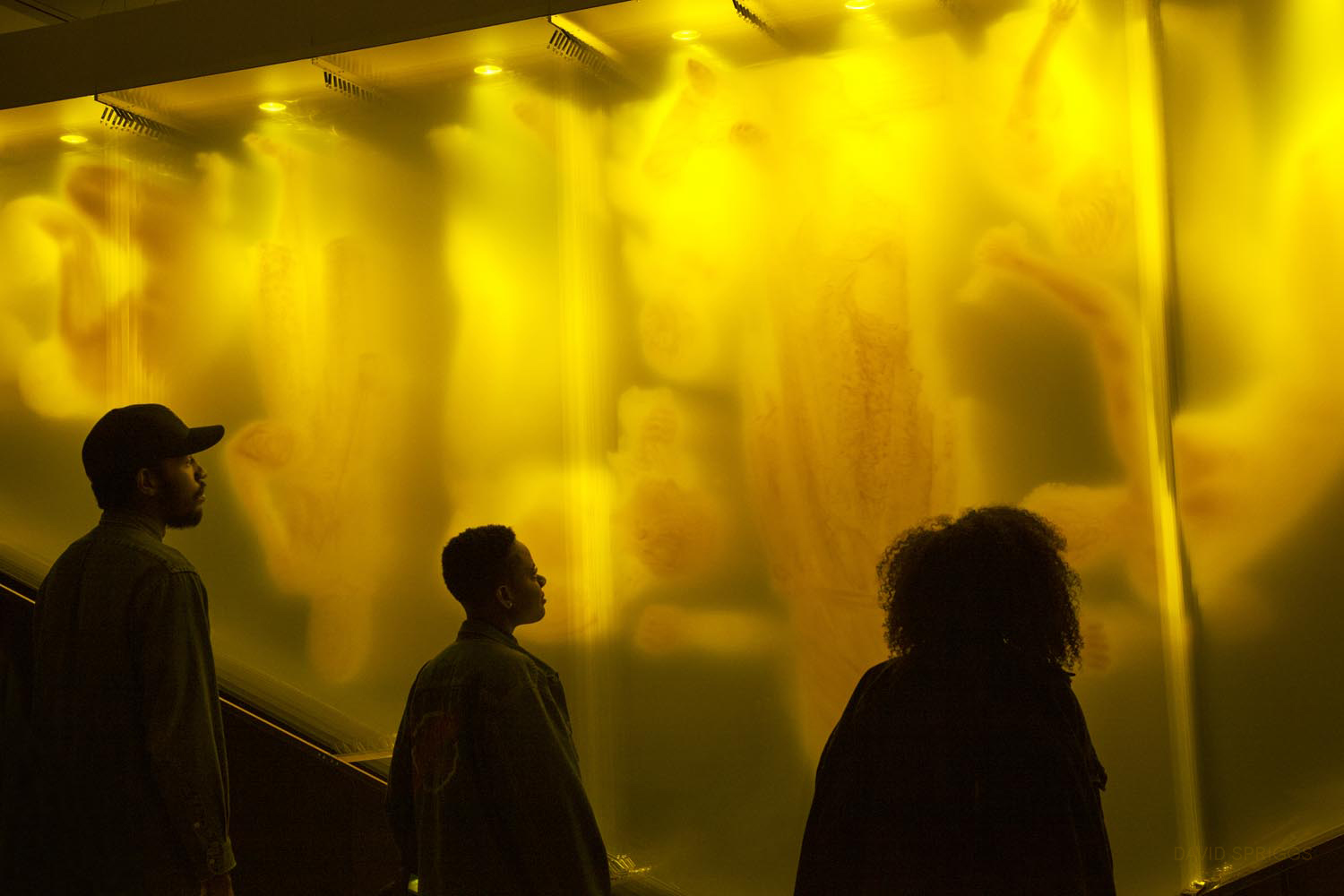 In order to represent the immaterial concept of gold’s value, Spriggs chose to depict the sculpture featured in the pediment of the NYSE building, but recreating its shape was only part of the depiction that Spriggs wanted to express. “One of the things I’ve been thinking about is ‘Pittura Infamante,’ which means ‘defaming portrait.’ They often represent people as a way to humiliate and disgrace someone by representing them hanging upside down.” So, rather than use gold to revere a cultural icon, he chose to do the opposite. “I thought it would be interesting to do this piece as an inverted, fetishized icon.”

Spriggs says that it’s difficult to capture GOLD in documentation because the imagery changes as the viewer moves around it. “When you’re actually there in front of it, you can see so much more detail, like these figures floating in space.” And location has more to do with the installation of the work than just where to stand in the room to view it. There’s a serendipity to the geographical placement of the work that echoes the element of chance in the stock market that can change the value of a commodity. “What I think was a beautiful coincidence is that the financial district in Pittsburgh is called ‘The Golden Triangle’ because a lot of the fortune 500 companies were started there.”

GOLD is on display at Woodstreet Art Galleries in Pittsburgh, Pennsylvania, through April 2nd, 2017. See more of David Spriggs’ work on his website.

Why Is a Giant Rainbow Horseman Invading Montreal?

A Forest of Ink-Covered Trees Grows in Pittsburgh