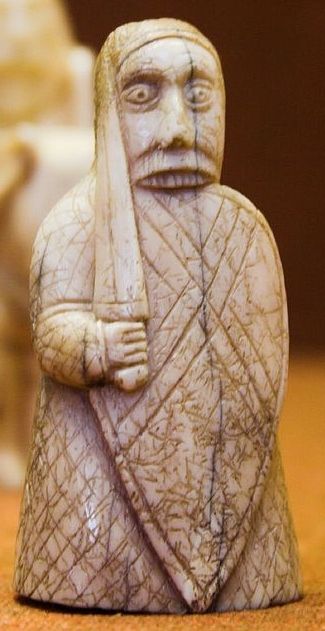 Back in 1964, an antiques dealer bought an ivory chessman for £5 ($6). Little did he know that this chessman is worth $1,000,000. The said chessman is the lost “Lewis Warder”, and is one of the most famous chess piece around the world. To think that an object worth this much was stored in a drawer for 55 years.

…the piece… could now fetch up to £1 million ($1.3 million) at auction after the late owner’s family took it to Sotheby’s auction house in London for assessment.

The Lewis Chessmen were found on the Isle of Lewis in Scotland’s Outer Hebrides in 1831, but the circumstances of their discovery are shrouded in mystery. With 93 pieces found — the majority carved from walrus ivory — the set was missing one knight and four “warders.”

The leading theory about their origin is that they were carved between the late 12th and early 13th centuries in Trondheim, Norway, Sotheby’s said in a press release.

Of the 93 pieces discovered in 1831, 82 are in the British Museum in London while 11 are in the collection of the National Museum of Scotland in Edinburgh.

The new discovery is a 3.5-inch warder, a bearded figure with a sword in his right hand and shield at his left side. In modern chess it would be the equivalent of a rook. It will be auctioned at Sotheby’s London on July 2, the first time any of the Lewis Chessmen has been auctioned.

A spokesperson for the family, which wishes to remain anonymous, said in a statement that the warder was cataloged in the antiques dealer’s purchase ledger as “Antique Walrus Tusk Warrior Chessman.”

“From this description it can be assumed that he was unaware he had purchased an important historic artifact,” the spokesperson said. “It was stored away in his home and then when my grandfather died my mother inherited the chess piece.”

“My mother was very fond of the Chessman as she admired its intricacy and quirkiness. She believed that it was special and thought perhaps it could even have had some magical significance.”

“For many years it resided in a drawer in her home where it had been carefully wrapped in a small bag. From time to time, she would remove the chess piece from the drawer in order to appreciate its uniqueness.”

Rating A Lewis Chessman Worth Over $1 Million Was Found in A Man’s Drawer is 5.0 / 5 Votes: 5
Please wait...
Loading...
Related articles