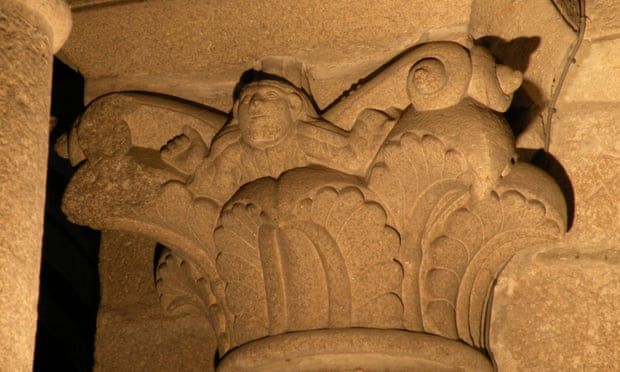 I’m sure the anonymous mason would have wanted his peers to find out about his masterpiece sooner than 900 years after, but hey, people found it! A portrait carved in the early 12th century at Santiago de Compostela has been discovered by a British art scholar who claims that it was never meant to be part of the cathedral’s decorations, as the Guardian details:

“You find this in medieval buildings,” Dr Jennifer Alexander told the Observer. “They’re usually in dark corners where only another stonemason would find them. This one is in a bit of the building where you’d have to be a stonemason to be up there to see it. It’s tucked away in among a whole set of capitals [the top of a column] that are otherwise plain.

“It’s just such a charming connection between us and the person that carved it. It’s almost as if it was designed just for us to see it by those people working on the building. Of course, this stonemason probably had no idea that he’d have to wait so long to be spotted.”

Despite the supreme talent of such craftsmen, they were completely anonymous, their names lost to history. This is the closest the mason got to signing his work.

Image via the Guardian ‘