Being a mother is a blessing – however, it’s an incredibly tough job. The unforeseen pregnancy complications, a frightening delivery that can never be thoroughly planned and, of course, those sleepless nights that your little one is bound to bring upon you.

No matter how prepared you think you are, motherhood will turn your world upside down; a once carefree existence will now be focused on your offspring’s emotional and physical well-being. Every mother wants their kid to live a wholesome and untroubled life, meaning that our minds will always be clouded with worries.

Mother’s Day is a meaningful celebration that allows folks to honor their beloved mothers who went and, perhaps, are still going through an immense amount of stress to give their children the best life possible. Everyone celebrates it their own way, yet a couple of days prior, this online user was startled by an odd request from her childless sister-in-law.

Sometimes it’s hard to not get offended when folks say the most absurd things, especially if that person is in your family 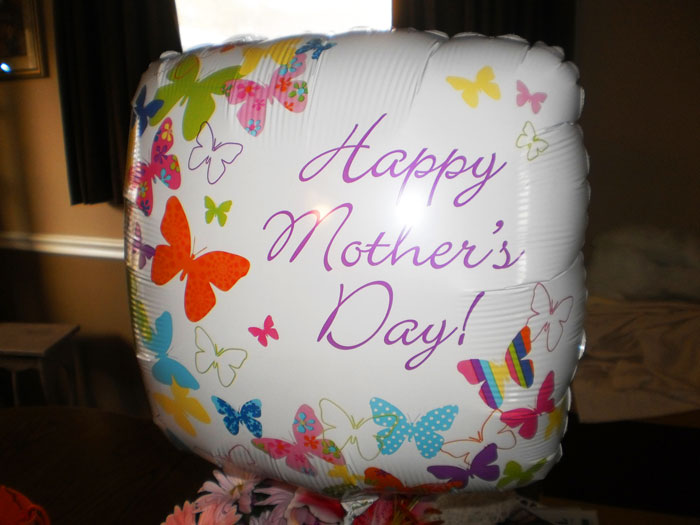 “Will I be the a-hole for not celebrating my sister-in-law (who doesn’t have kids) on Mother’s Day?” – A woman took it to a well-known online community to reveal a rather odd request that her brother’s wife had sprung upon her. The post received over 3.4K upvotes and nearly 900 comments discussing the absurdity of the event. 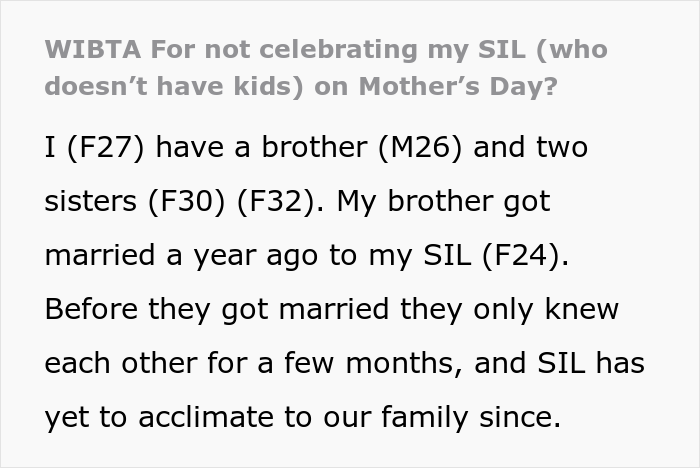 The author began her post by introducing her family; she’s a 27-year-old mother who has a brother and two older sisters. The woman revealed that her brother got married a year ago and before the couple decided to tie the knot, they were only together for a few months, meaning that the sister-in-law hasn’t “acclimated” to the household just yet. 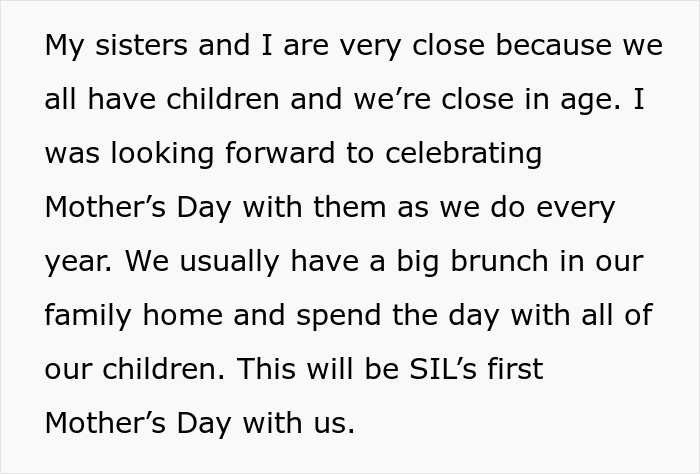 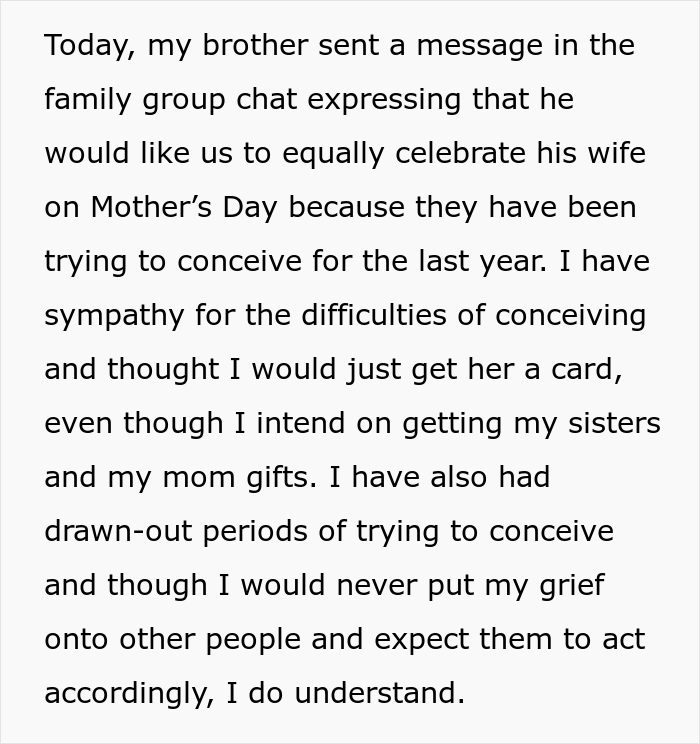 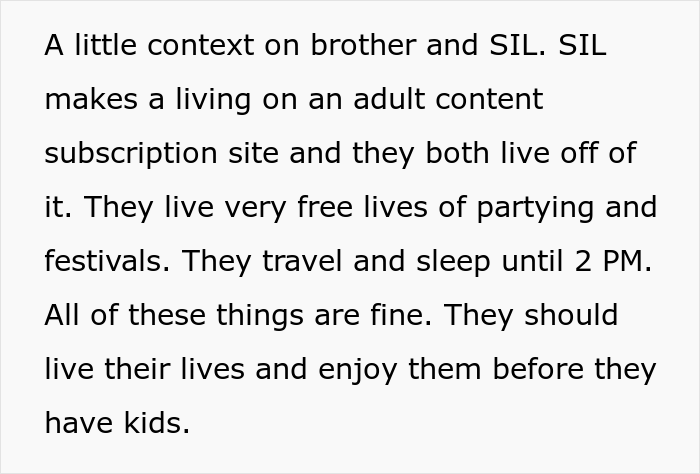 The OP then went on to explain that she and her sisters are very close because they all have children and are quite close in age. As per usual, the woman was looking forward to celebrating Mother’s Day with them as they always have a big brunch at their family home and just spend the day with all of their kids. However, the author’s brother decided to send a message to the family group chat, saying that he would like them to “equally celebrate” his wife, as they’ve been also trying to conceive for some time. The woman revealed that whilst she does have sympathy for folks who have difficulties conceiving, she just thought she’d get her SIL a card, even though she intends to purchase gifts for her sisters and her mother. 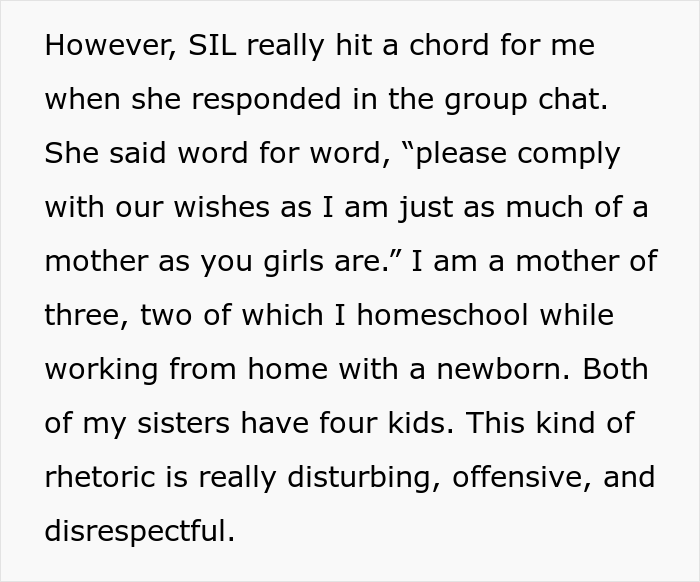 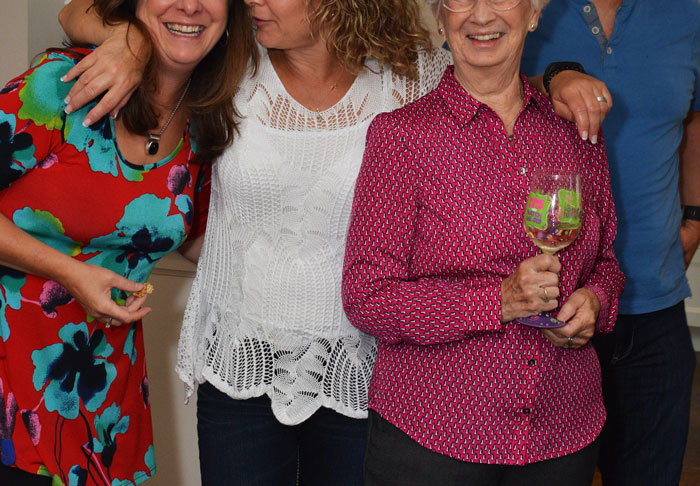 However, what really infuriated the woman was the SIL’s response. The 24-year-old asked her husband’s family to comply with her wishes as she’s just as much of a mother as they are. The author then mentioned that she’s a mother of 3 kids, 2 of whom she homeschooled herself while working from home and taking care of a newborn. Both of her sisters also have four kids each, which is why this clueless request really offended her. The woman then finished her post off by wondering whether she’ll be a bad guy for totally ignoring her SIL’s request and celebrating the day just like she initially planned. 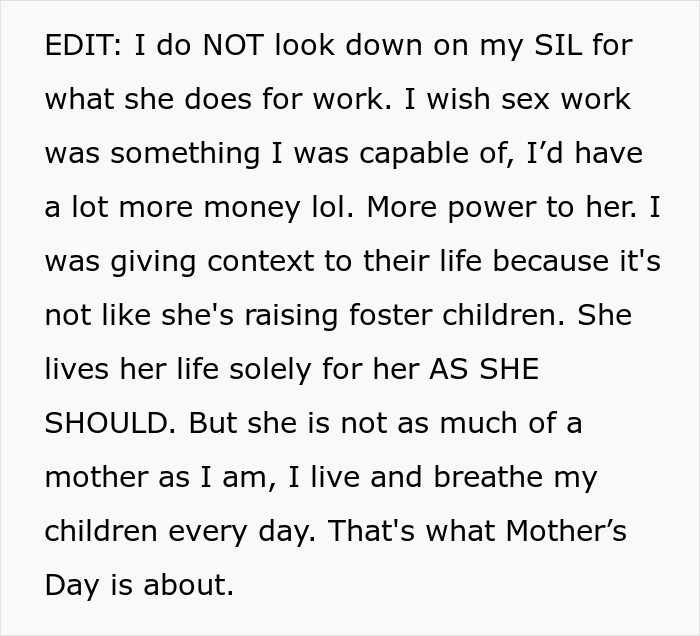 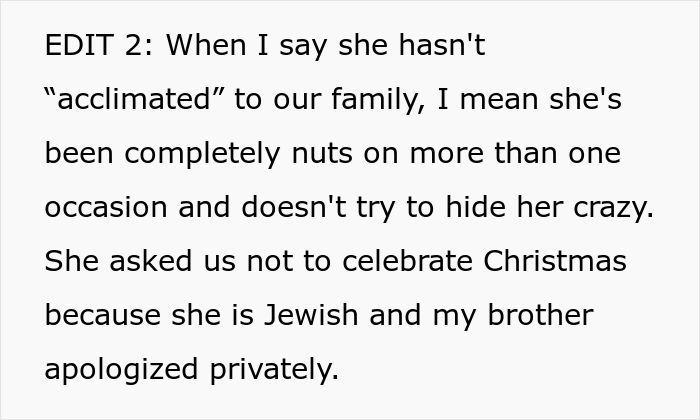 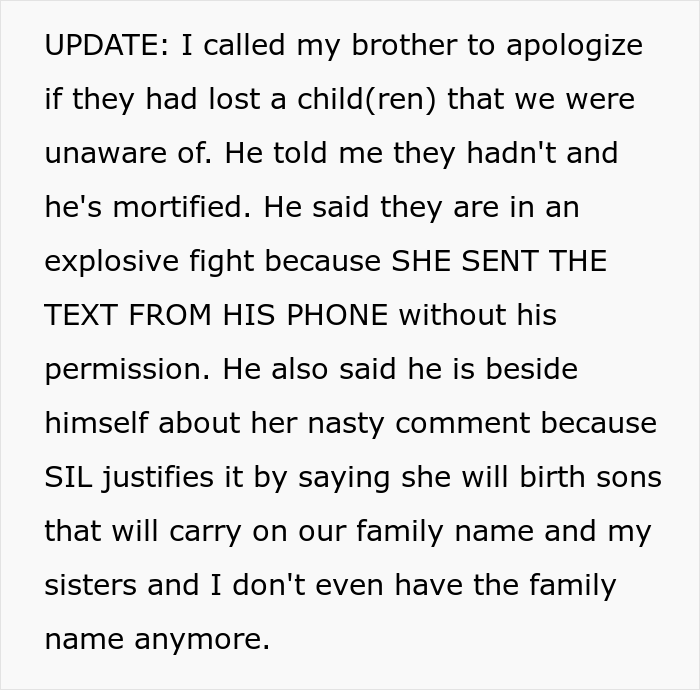 Later on, the OP edited her post and added a disclaimer saying that she’s not looking down on her SIL whatsoever, and the reason why she mentioned her sex work career was to give the context to her life. She wanted the Redditors to understand that her brother and SIL live their lives solely for themselves, which, of course, means that this whole “I’m just as much of a mother as you are” malarkey is a bunch of nonsense. Moreover, turns out, that it wasn’t the first time the 24-year-old had demanded something completely out of place: for instance, she once asked the family not to celebrate Christmas because she’s Jewish. 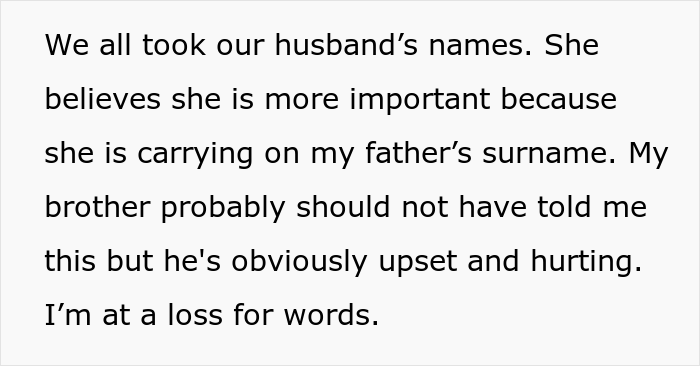 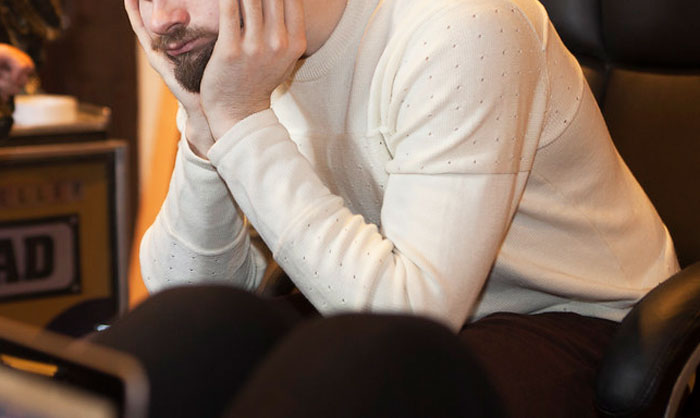 Presumably, after reading some comments from the members of the online community, the woman decided to call her brother to apologize just in case they had lost a child that she was unaware of. The brother, though, said that they hadn’t and the couple was actually in the middle of a nasty fight. The man said that the text was actually sent from his phone without his permission, besides, he was also pretty puzzled as the woman justified it by saying that she’s the one who’s going to birth sons who will carry on his family name and that his sisters don’t even have that name anymore, hinting at the fact that she’s more important.

Fellow Redditors shared their own thoughts regarding this questionable situation 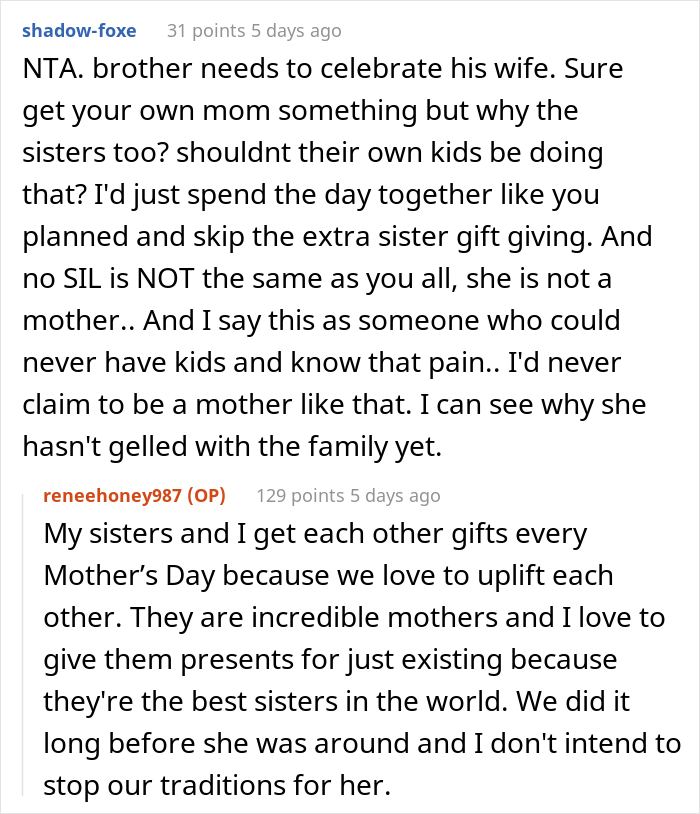 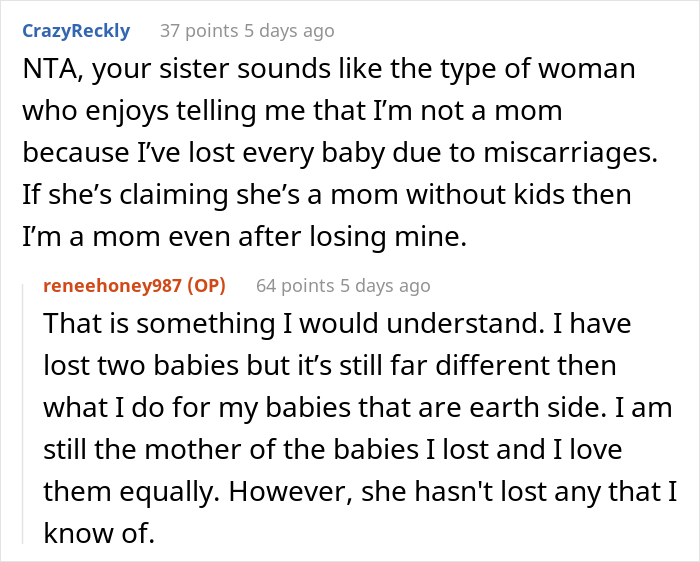 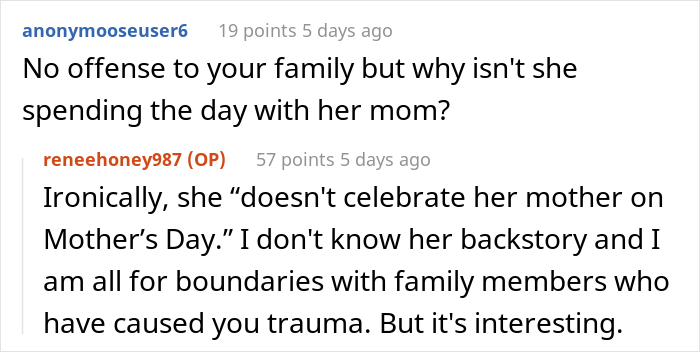 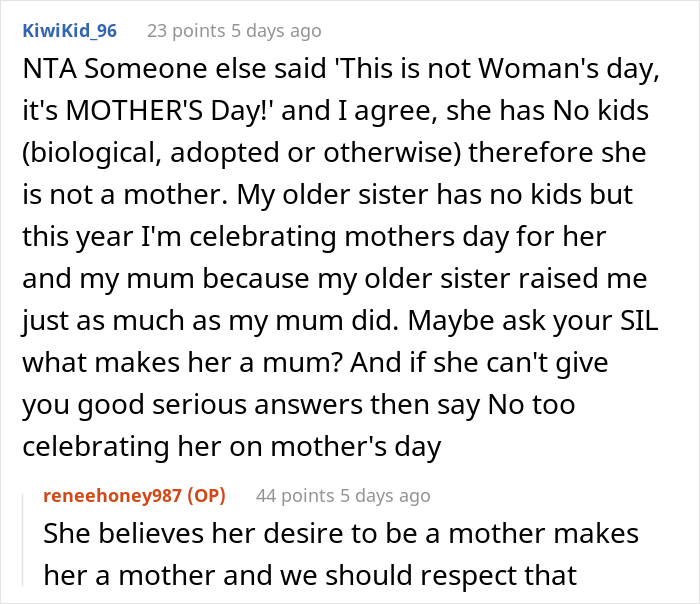 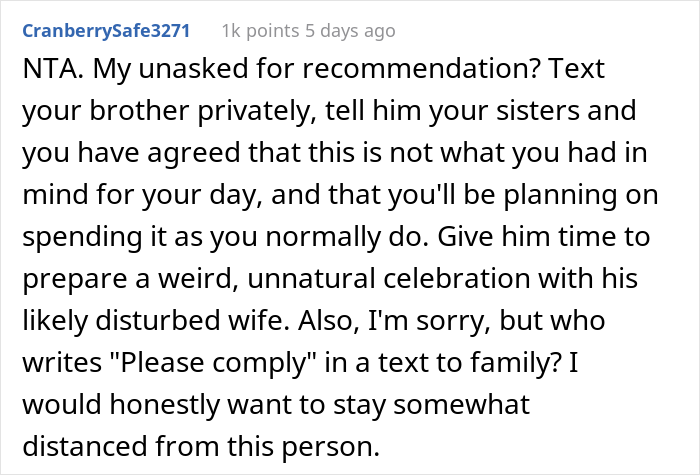 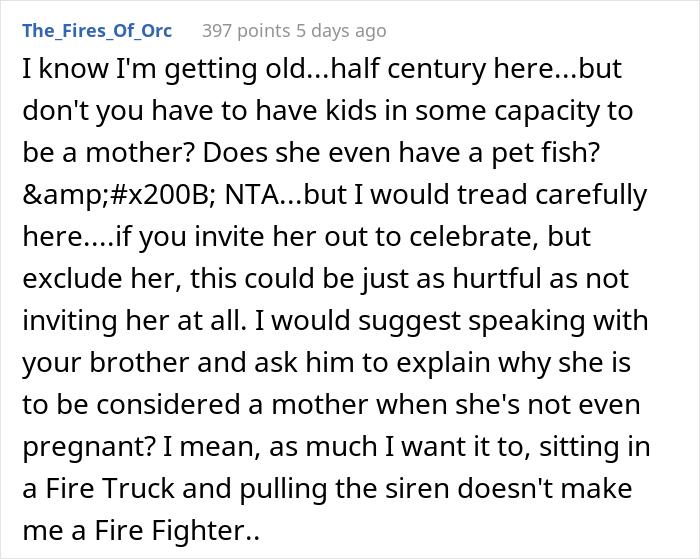 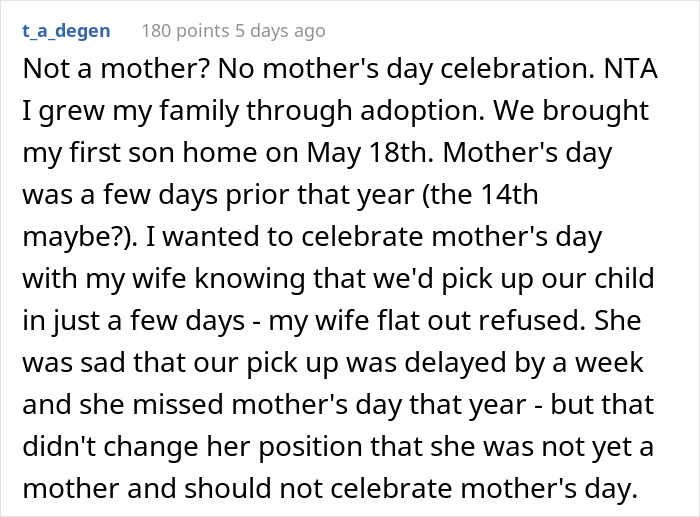 The post A Mom Of 3 Disagrees With SIL’s Request To Be Celebrated On Mother’s Day, As She Finds It Disrespectful Because The Woman Doesn’t Have Any Children first appeared on Bored Panda.