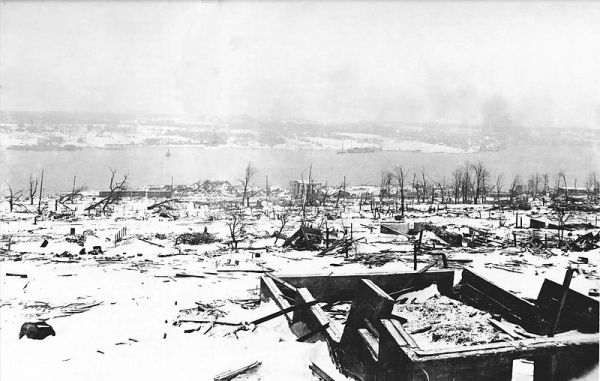 The biggest man-made explosion before the atomic age was the Halifax Explosion on December 6, 1917. A French ship, SS Mont-Blanc, collided with another ship on its way into the harbor in Nova Scotia and a fire ignited its 2,925-ton cargo of explosives. The blast leveled the surrounding community and the resulting tsunami destroyed another village. Two thousand people died, and another 9,000 were injured.

One of the witnesses to the blast was Frank Baker, a sailor in the Royal Navy, who wrote about the events of that day in his diary. He passed his journal on to his son Rex before his death in 1977. Rex put the diary away and only recently rediscovered it.

“The first thud shook the ship from stem to stern and the second one seemed to spin us all around, landing some [crew members] under the gun carriage and others flying in all directions all over the deck,” Baker wrote. Sailors 150 miles out to sea heard the blast. On land, people felt the jolt 300 miles away. The shock wave demolished almost everything within a half-mile. “Our first impression was that we were being attacked by submarines, and we all rushed for the upper deck, where we saw a veritable mountain of smoke of a yellowish hue and huge pieces of iron were flying all around us.”

Frank Baker’s diary entry is believed to be the only eyewitness account of the explosion recorded on that day. Read the rest of it at Smithsonian.