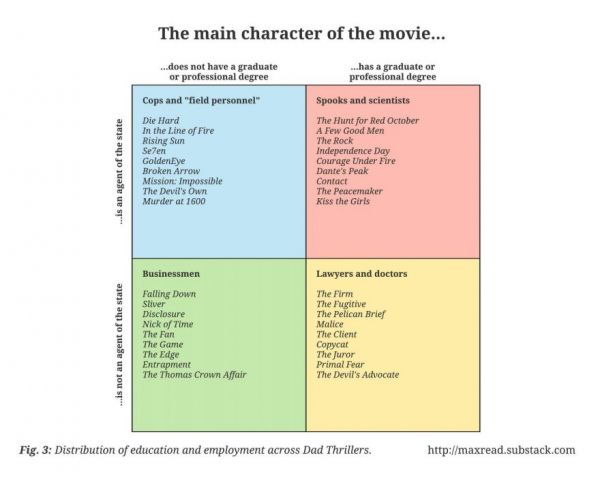 Max Read found himself pulling up familiar old movies to watch while he was at home with a new baby during lockdown. He got to thinking about what they had in common and why he liked a particular kind of movie so much, and so did his contemporaries, Gen X men who are now raising kids and populating the internet. He dubbed these movies Dad Thrillers.

If you’re anywhere near me in age, you know the kind of movies I’m talking about: Movies set on submarines; movies set on aircraft carriers; movies where lawyers are good guys; movies where guys secure the perimeter and/or the package; movies where a guy has to yell to make himself heard over a helicopter; movies where guys with guns break the door into a room decorated with cut-out newspaper headlines. Movies starring guys like Harrison Ford, Alec Baldwin, Kevin Costner, and Wesley Snipes and directed by guys like Martin Campbell, Wolfgang Petersen, Philip Noyce, and John McTiernan. Movies where men are men, Bravo Teams are Bravo Teams, and women are sexy but humorless ball-busters who are nonetheless ultimately susceptible to the roguish charm of state security-apparatus functionaries. Movies that dads like.

He not only identified and named these movies, Read analyzed them and gives us a guide to recognizing them, with several graphs and charts that you will relate to. See them in his recent newsletter. If this is your kind of movie, you’ll find plenty of titles that you’ll want to watch, even if you’ve seen them more than once before.  -via Boing Boing