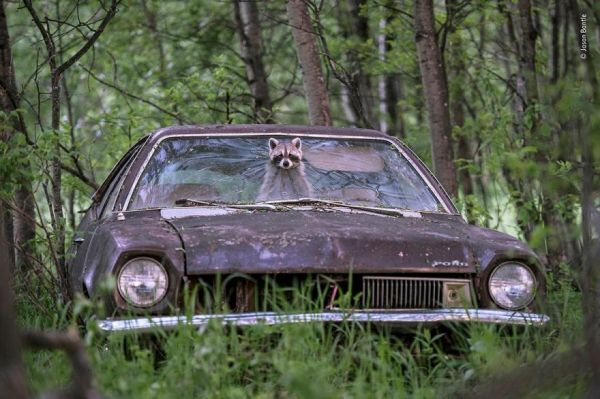 A hundred shortlisted entries in the Wildlife Photographer of the Year competition are being prepared for exhibit at the Natural History Museum in London. The museum gives us a preview of some of the more stunning images they selected. The image above is titled “Lucky Break,” taken by Jason Bantle.

A raccoon pokes her face out of a 1970s Ford Pinto on a deserted farm in Saskatchewan, Canada. In the back seat, her five playful kits trill with excitement. It was a sentiment shared by Jason, waiting silently in a nearby hide, who had been hoping for this chance every summer for several years.

The only access into the car was through the small hole in the cracked safety glass of the windscreen. The gap was blunt‑edged but too narrow a fit for a coyote (the primary predator of raccoons in the area), making this an ideal place for a mother raccoon to raise a family.

Another of the “Highly Commended 2019” images is this battle between a cheetah and a pack of dogs by Peter Haygarth. 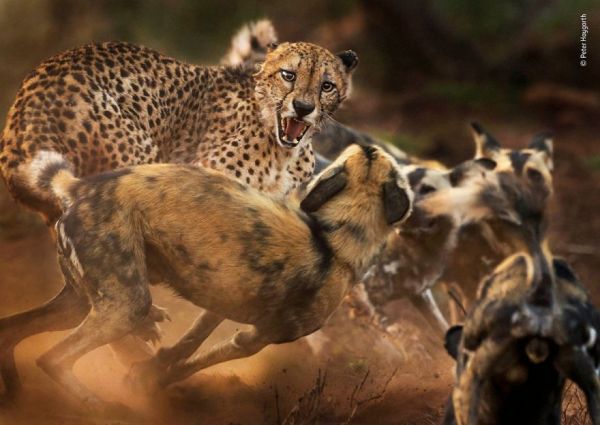 Peter had been following the dogs by vehicle as they hunted in Zimanga Private Game Reserve, KwaZulu-Natal, South Africa. A warthog had just escaped the pack when the leading dogs came across the big cat. At first, the dogs were wary, but as the rest of the 12-strong pack arrived, their confidence grew, and they began to encircle the cat, chirping with excitement.

The elderly cheetah hissed and lunged back at the mob, his left ear tattered, the right one pinned back in the ruckus. As dust flew in the morning light, Peter kept his focus on the cat’s face. In a few minutes the spat was over as the cheetah fled.

The Wildlife Photographer of the Year exhibit will open at the Natural History Museum on October 18th, which we presume will also be the date the winners will be announced. It will run through next May. See ten preview images and read their stories here. -via Digg