The Disney+ streaming service is finally here, and yesterday they premiered the much-anticipated show The Mandalorian. For the next month and a half, Star Wars fans will get to tune in to the eight-episode show, which follows the titular bounty hunter around the edges of the galaxy.

This isn’t the kind of blog where I can review the show, but I can certainly go over some of the production design details with you. (Warning: Mild spoilers ahead.)

The show opens with a cantina barfight that ends with grisly results. As evinced by the design of this door, building safety codes are not very strict on this planet. 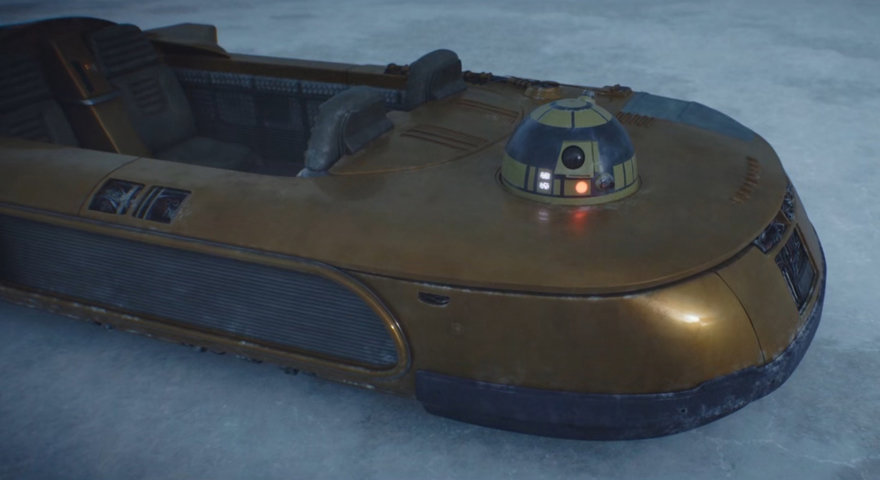 The starport where the Mandalorian parked his ride doesn’t offer shuttle service, so he calls for an Uber. The first option presented is an autonomous (okay, droid-driven) model.

No one in any universe thinks autonomous cars are totally safe, so he gets a second Uber that appears to be driven by Louis C.K. in exile.

I find it hard to believe that the Speeder dealerships on this frigid snow planet sell the same roadster models they sell on hot desert planets. No canopy, not even a windscreen!

Let’s talk about the Mandalorian’s ship. While it looks cool from the three-quarters angle you see above… 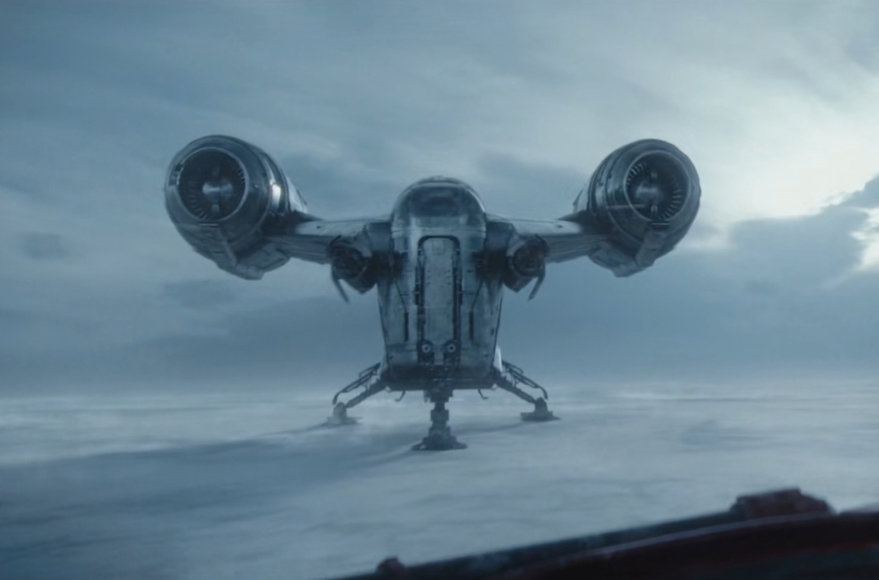 …I can guarantee it was not presented at the pitch meeting in orthographic views. Because from the front, it looks like R2-D2 lifting weights. 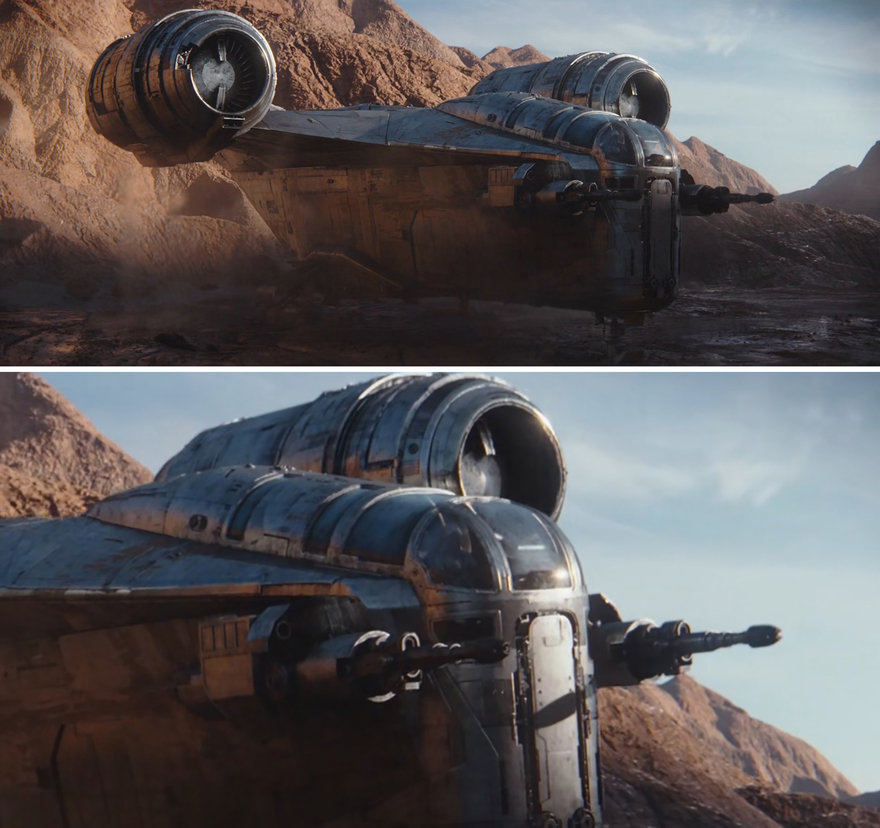 We can see, however, that he’s got some pretty sweet options on it. Panoramic sunroof, check. 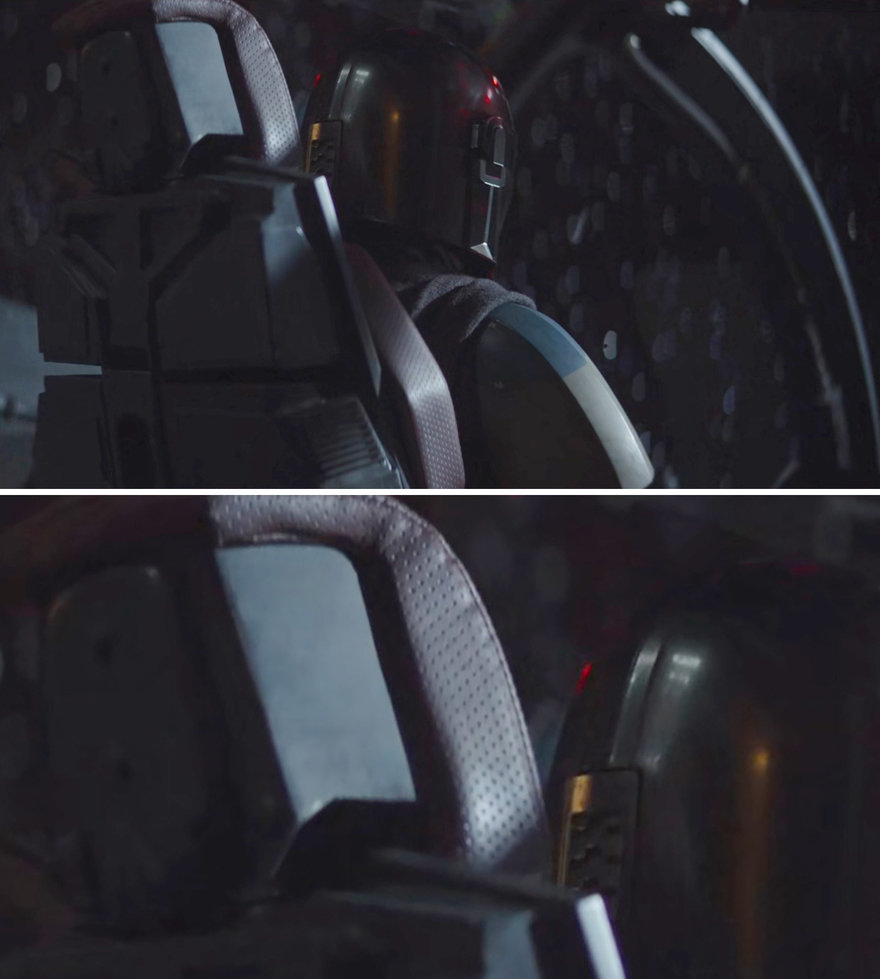 And the interior’s pretty dope, he’s got perforated leatherette seats. 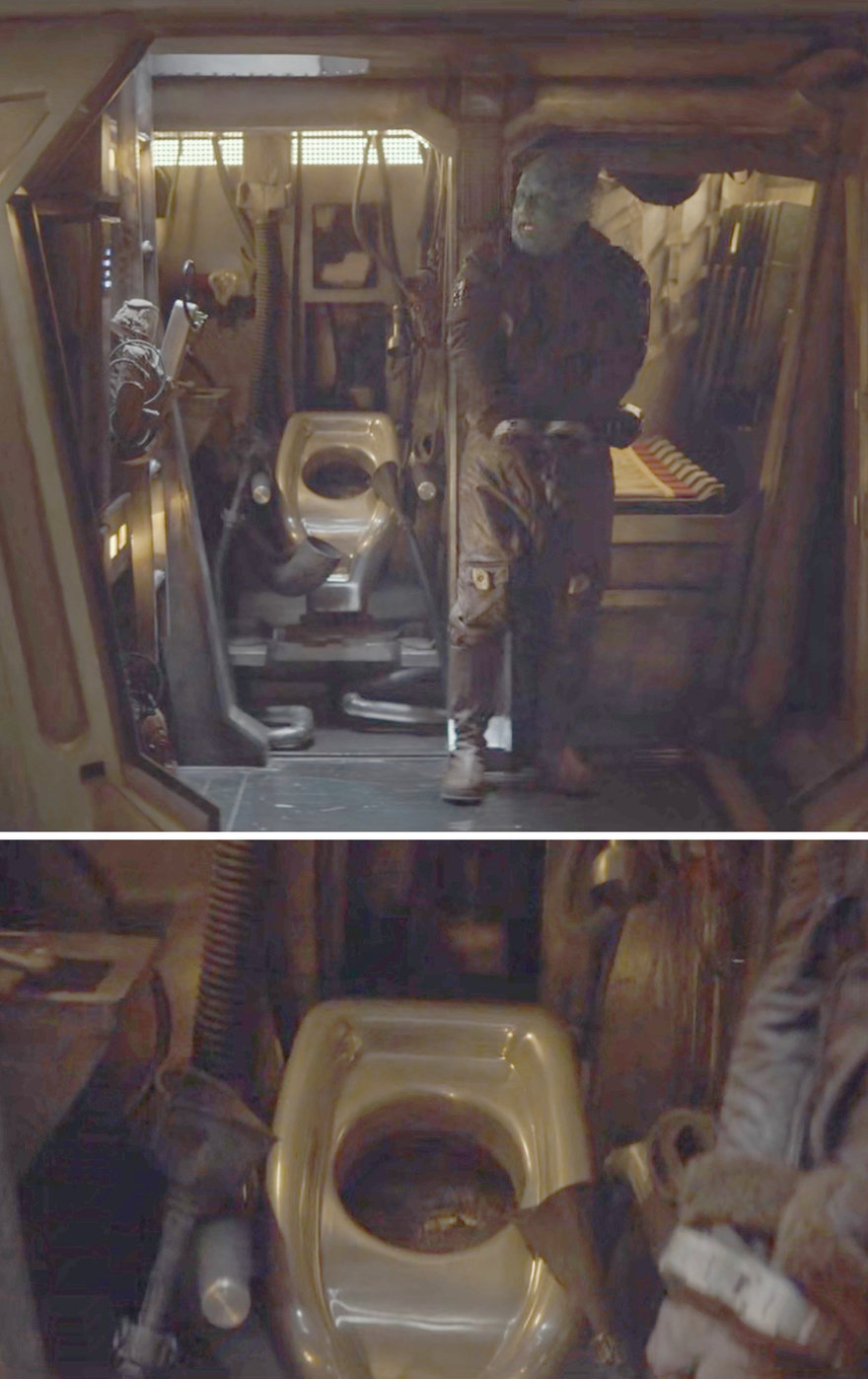 And finally, finally! We get to see what a spaceship toilet looks like. I believe this is the first time they’ve ever shown one in the Star Wars universe. It’s not very clear to me how this thing is meant to be used, and I don’t see any toilet paper nor a handle to flush with. 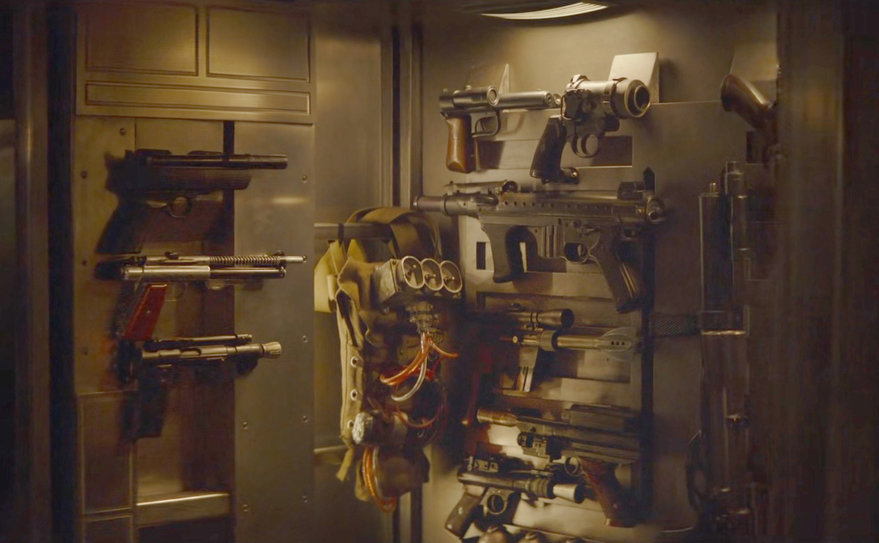 Inside a closet we get to see the Mandalorian’s Vision Wall. It appears he’s, like, a total gun nut. 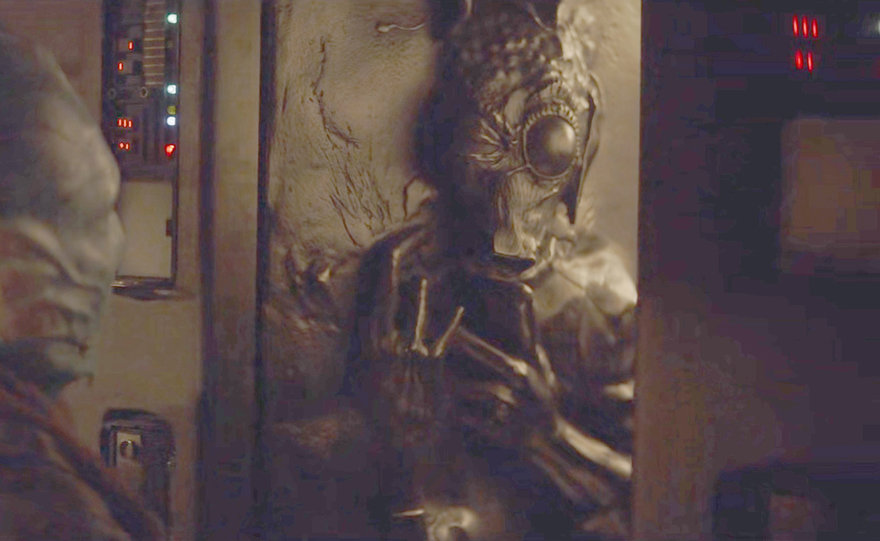 We also get to see that he’s frozen multiple perps in carbonite, and stores them on board. This Rodian captive is hardcore–he’s flashing gang signs even as he’s frozen. 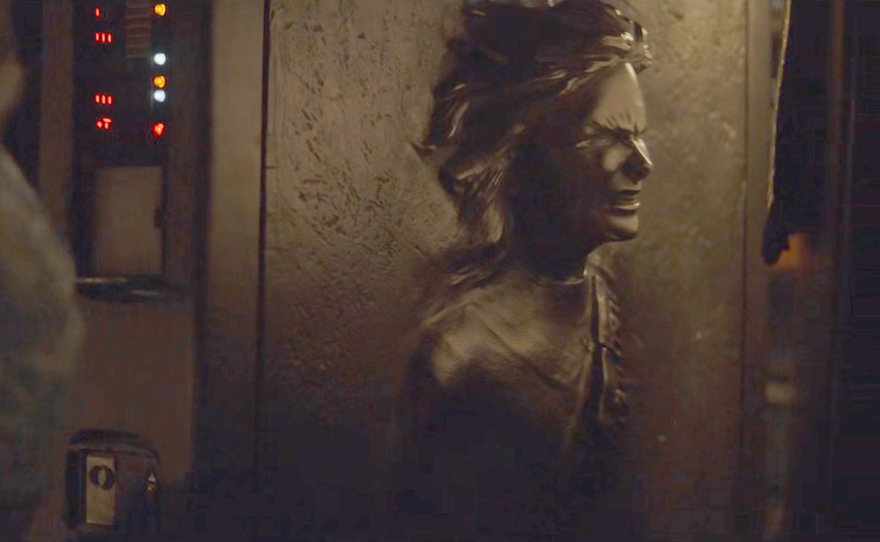 There’s also a female captive. If sexism exists in a galaxy far, far away, I’m guessing her bounty is 77 space-cents on the space-dollar. 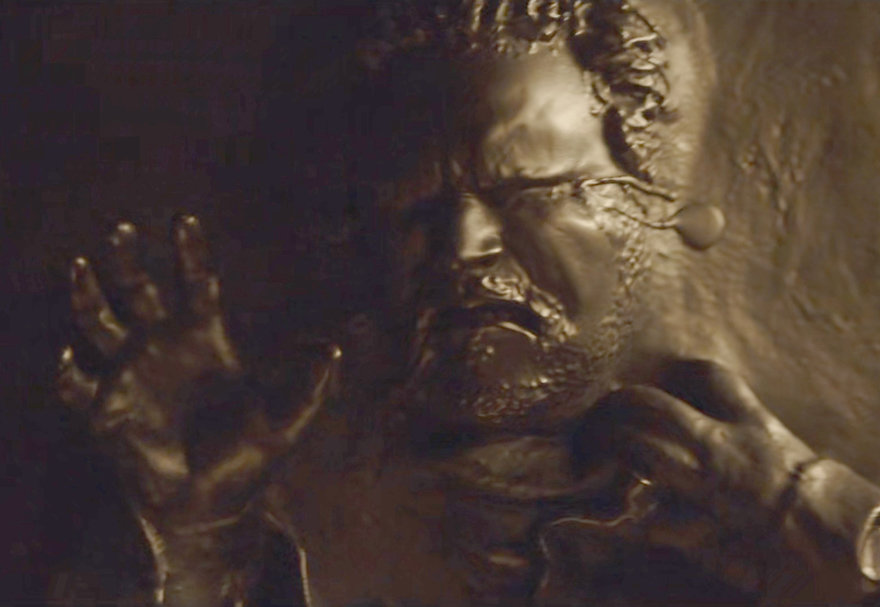 Here we see something interesting: This guy started to cry when he got frozen, and his tears have streamed out and frozen solid. I’m going to say this guy was in touch with his feelings and not a proponent of toxic masculinity. 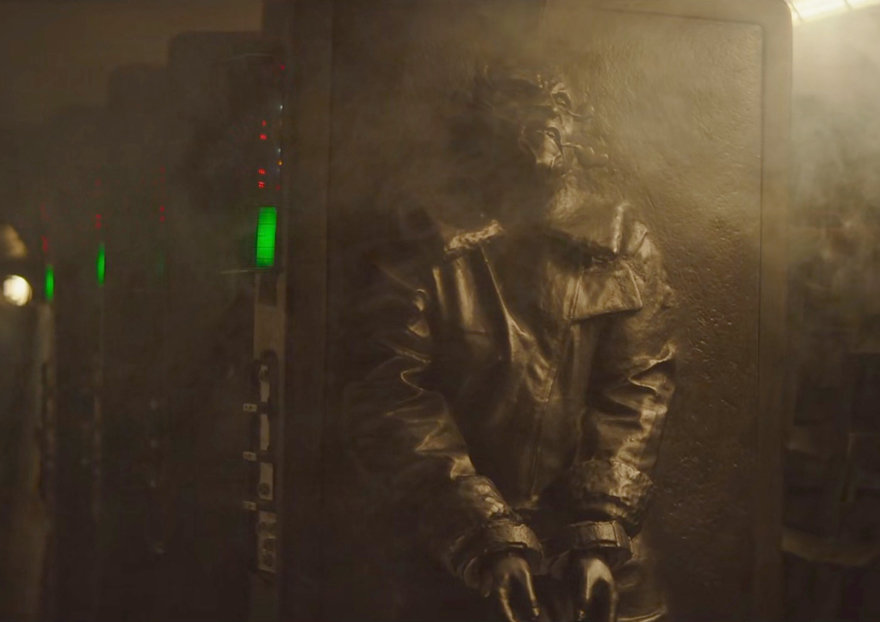 This Darth-Maul-lookin’ dude was obviously a problem, as he was frozen while still wearing cuffs. If the Mandalorian was wearing a body-cam, I guarantee he turned it off before dealing with this guy.

I know it’s super-blurry in this shot, but that little wand that you use to scan carbonite-frozen quarry looks like it was designed by the same people who did the Nintendo NES controller. 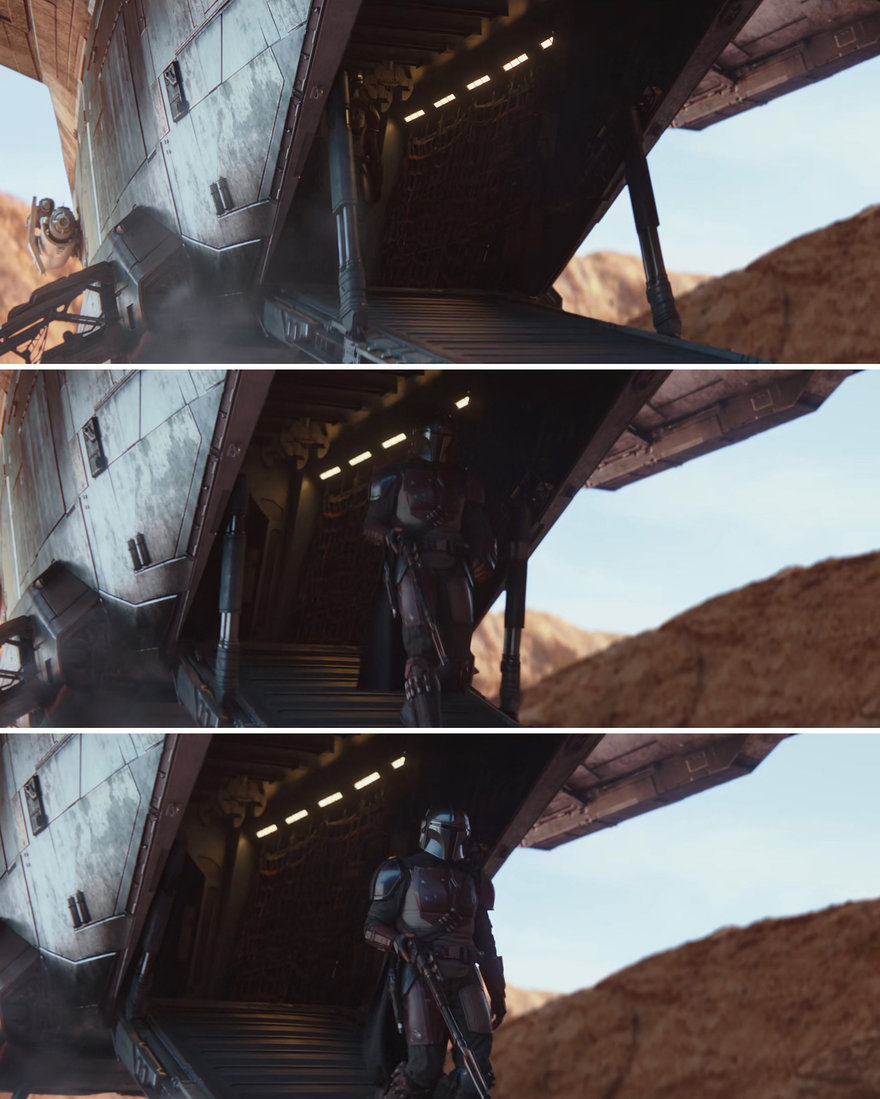 This was the coolest design I found all episode: When the hatch on his ship opens, it’s supported by hydraulic arms. But those arms might be obtrusive for loading and unloading, so they slide up and out of the way on little tracks. Props to the designer for sweating the details on this one. 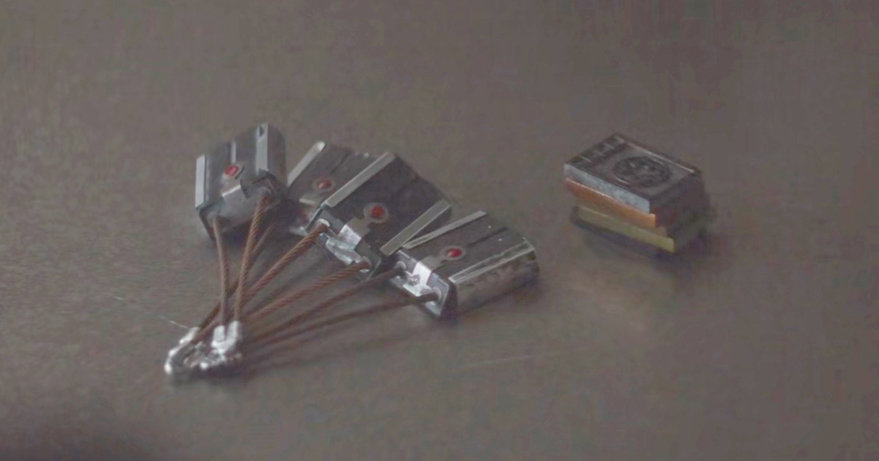 Here we see some Star Wars EveryDay Carry items we’ve not seen before: fugitive-tracking key fobs and Imperial money, which looks like you unwrap them and there’s delicious chocolate inside. 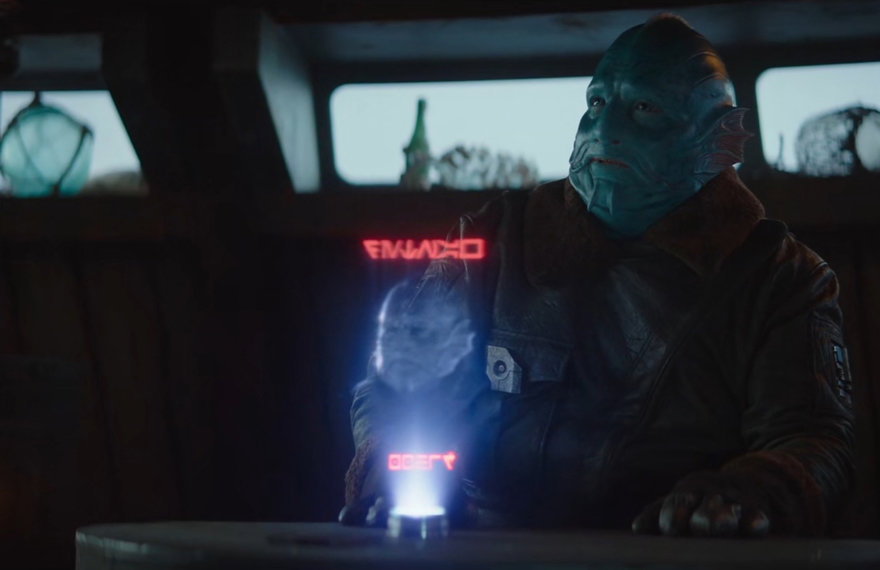 …which has a holographic display. 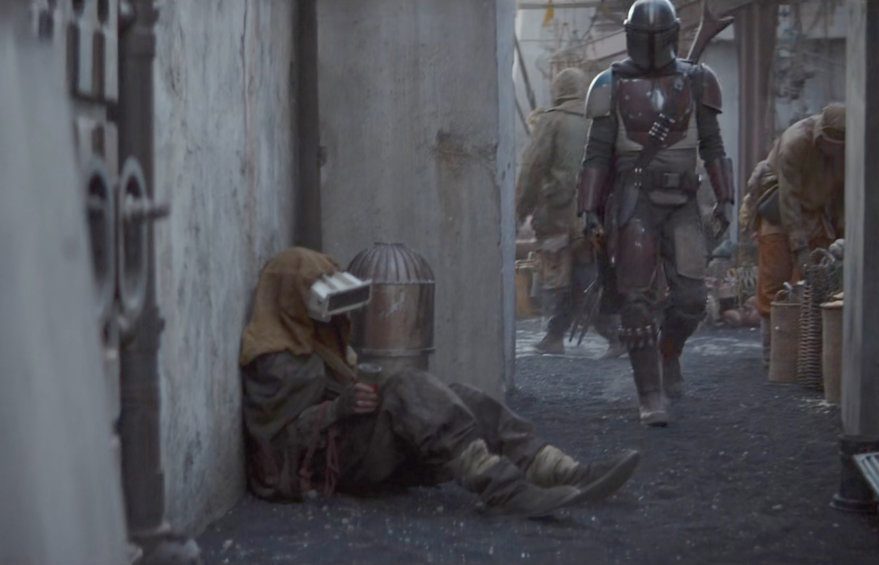 Here’s an alleyway junkie with an Oculus Rift. 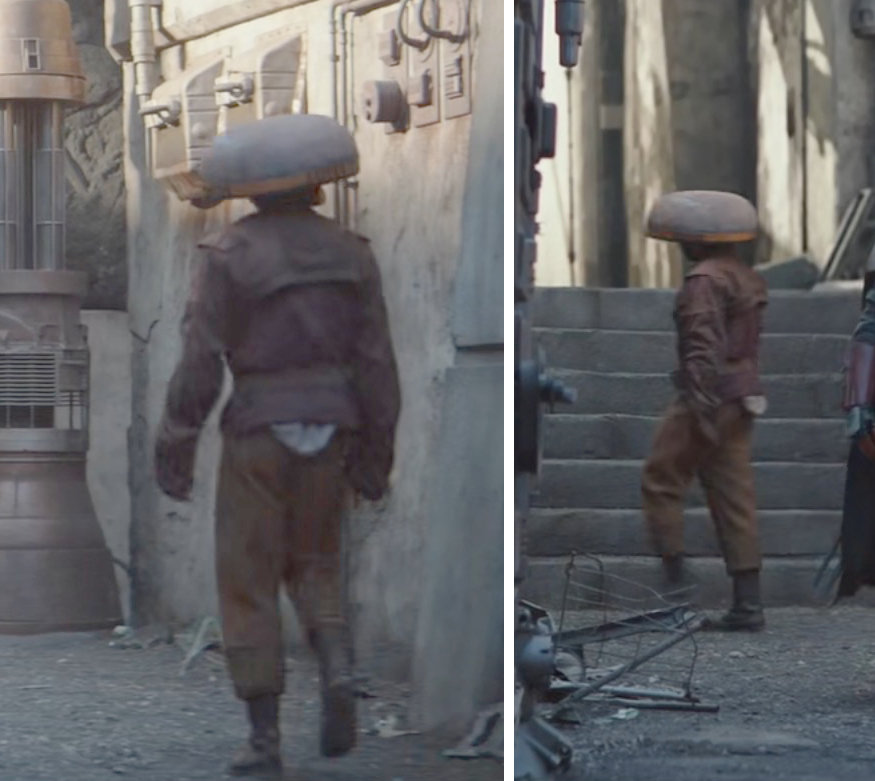 I can’t decide if this guy is a wok chef who brings it home with him every night, an inventor of a hands-free umbrella, or half-human and half-mushroom. 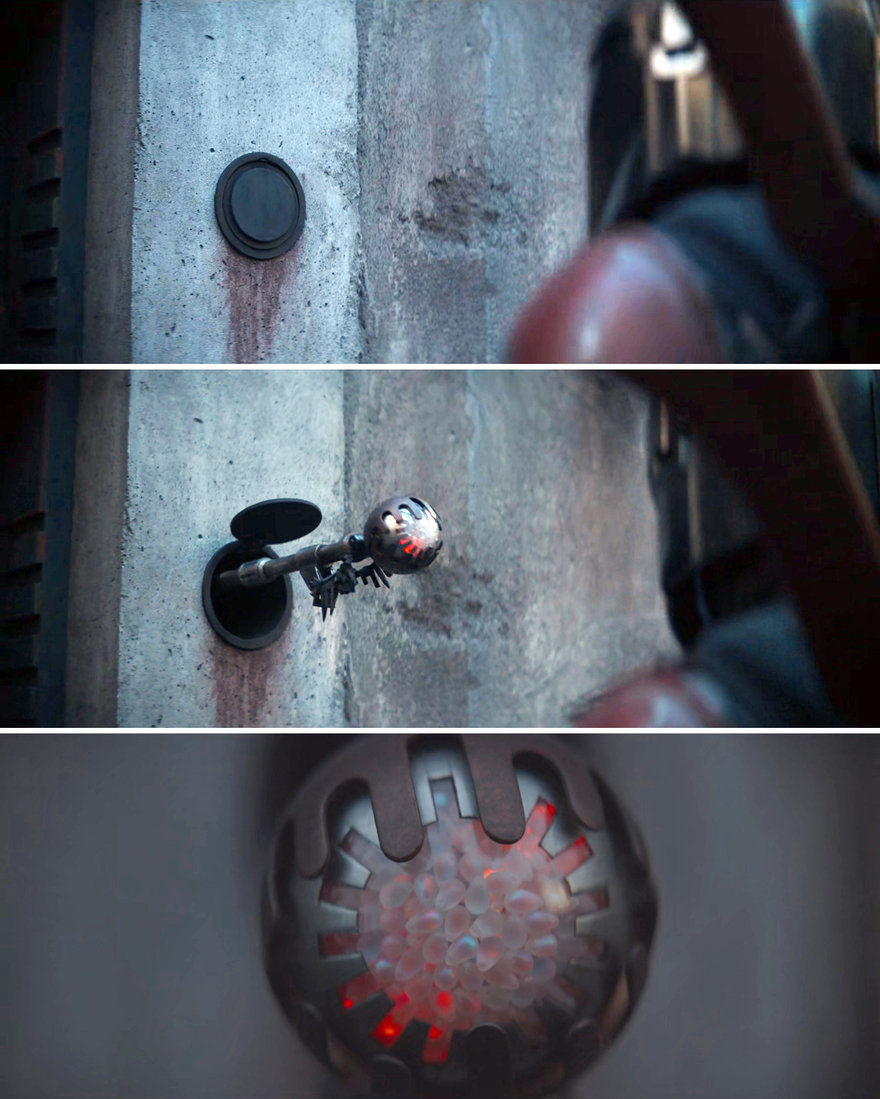 The Hello Nest doorbell that emerges from the wall looks like it’s still on Halloween mode: It’s filled with some kind of creepy, gummy treats. 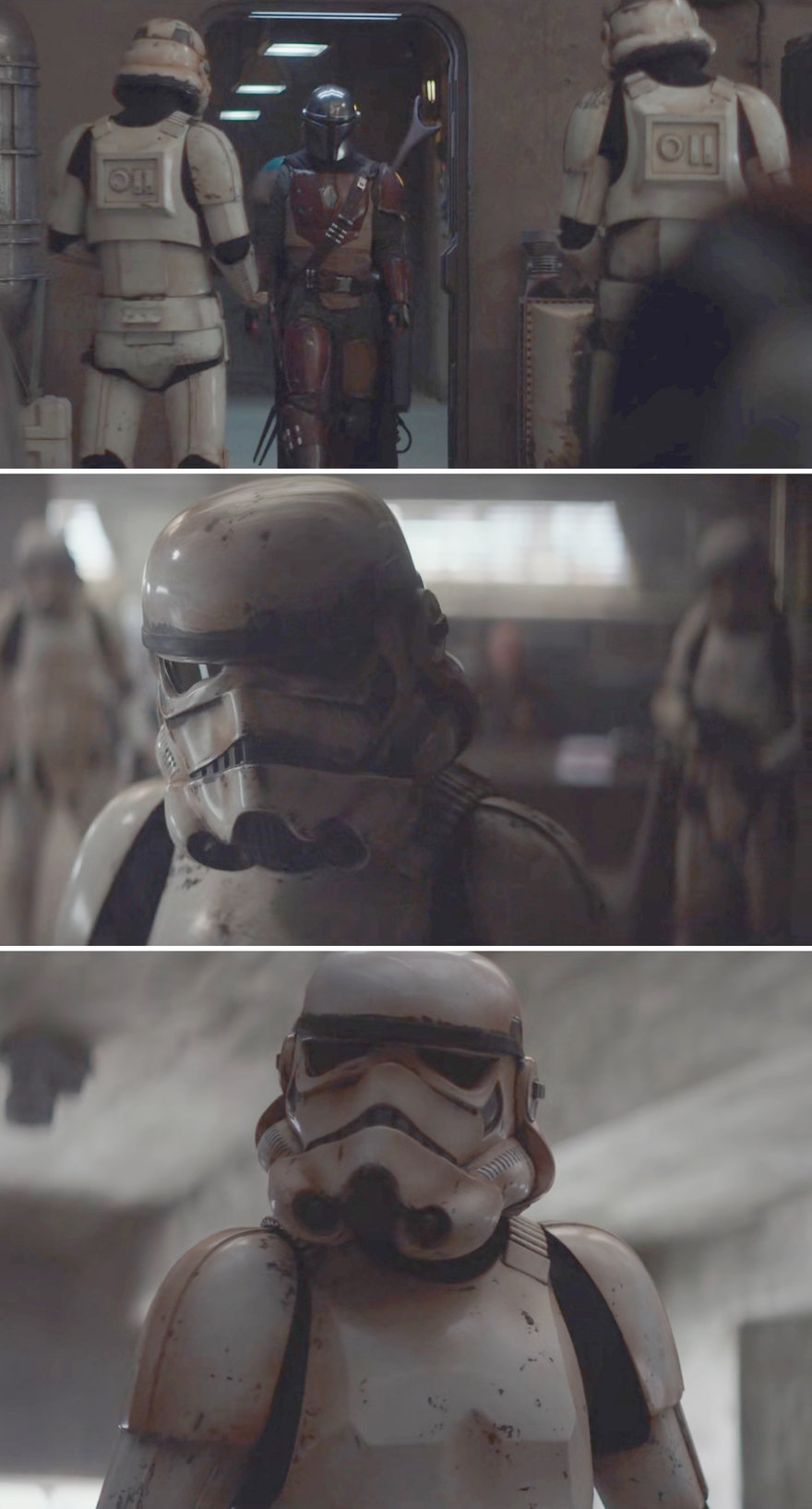 Here we see some seriously crusty Stormtroopers. These guys haven’t washed their armor since Return of the Jedi. Each one of them probably smells like an entire locker room. 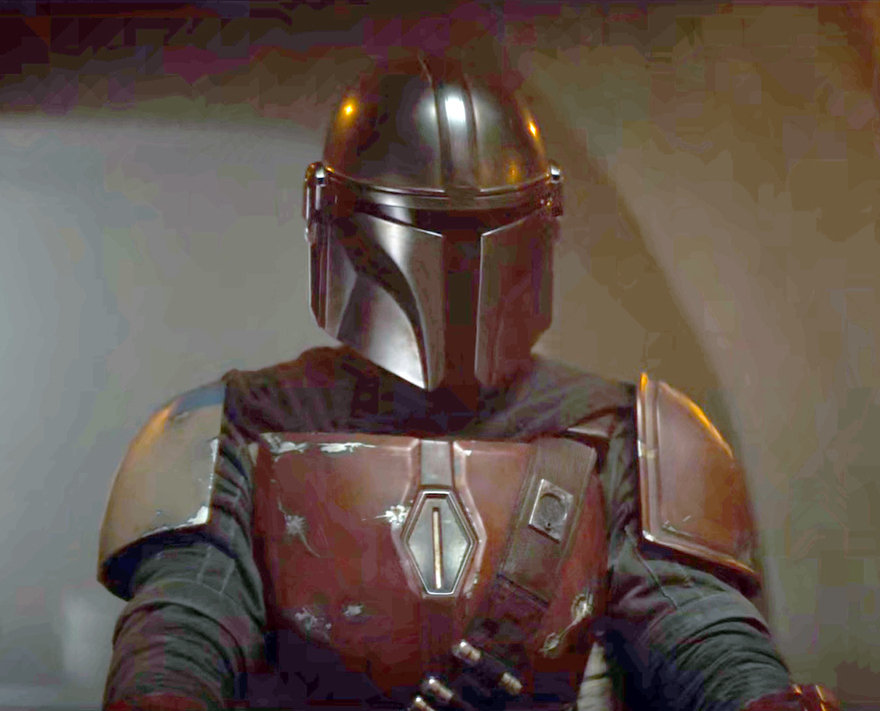 The Mandalorian’s armor is pretty banged-up too. I guarantee you when he’s off-shift, he wears Carhartt. 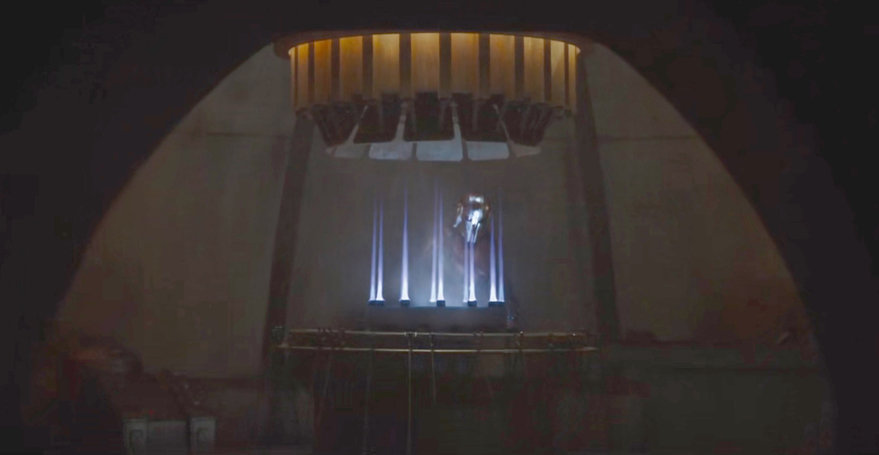 At one point he goes to visit a Bunsen burner saleswoman who moonlights as a blacksmith. 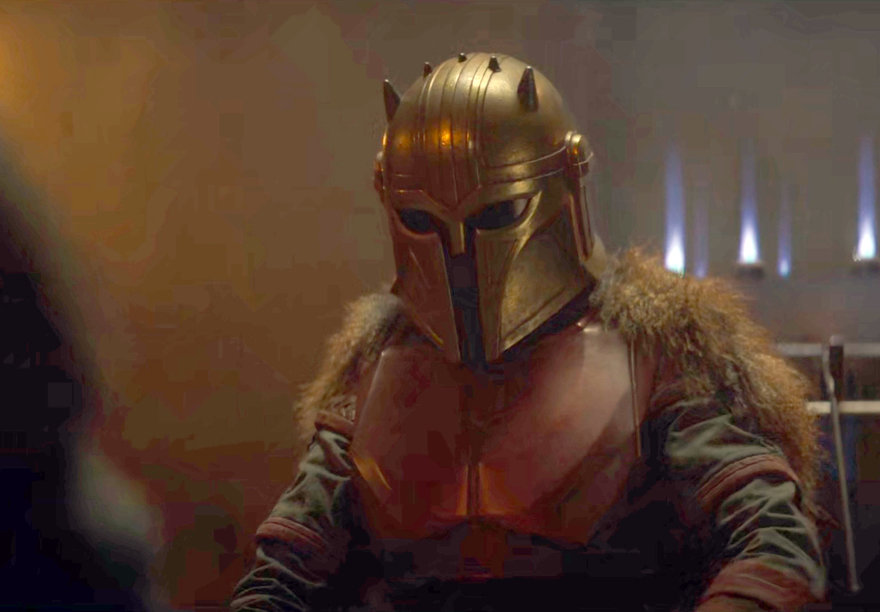 She’s got a Limited Edition golden helmet with little horns. 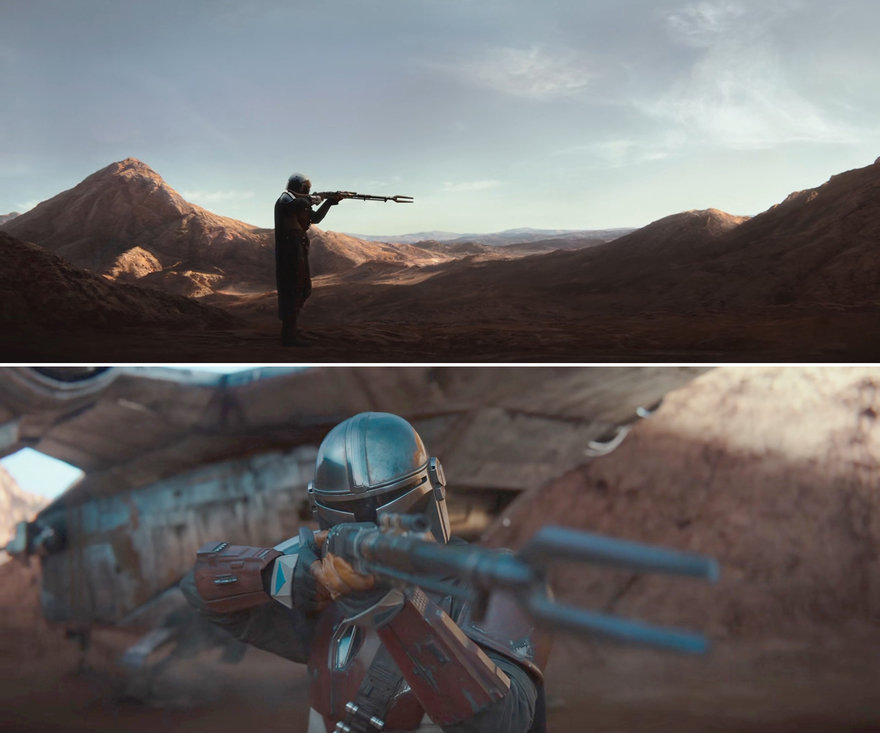 Back on another desert planet, we see a great shot of his rifle, which doubles as a tuning fork.

He stops off at a town that looks like Burning Man when they’re first setting it up. 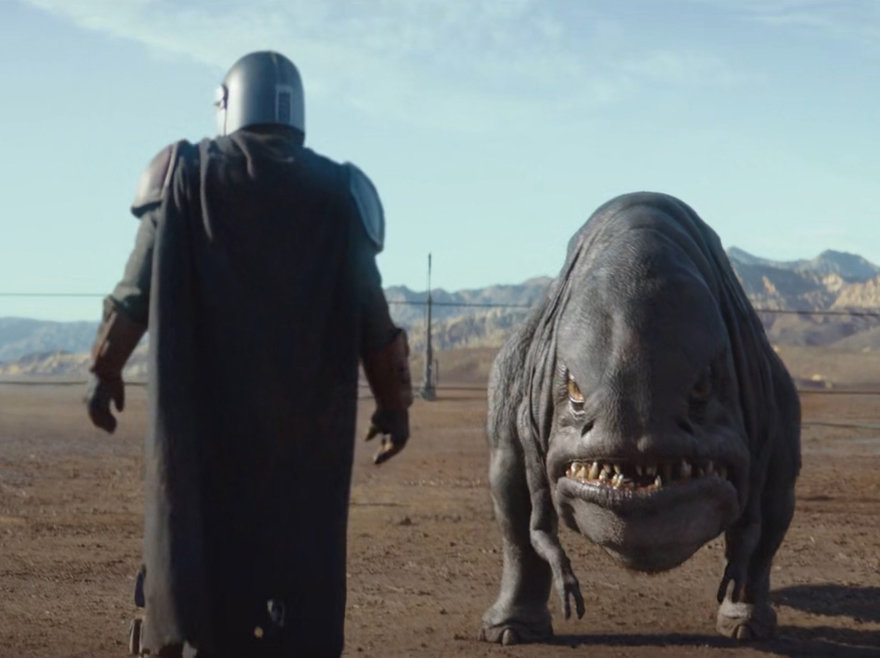 I wasn’t crazy about the character design for this creature, called a Blurrg. What was the brief? “Make it look like a cross between Don Rickles and a deep-sea fish.” 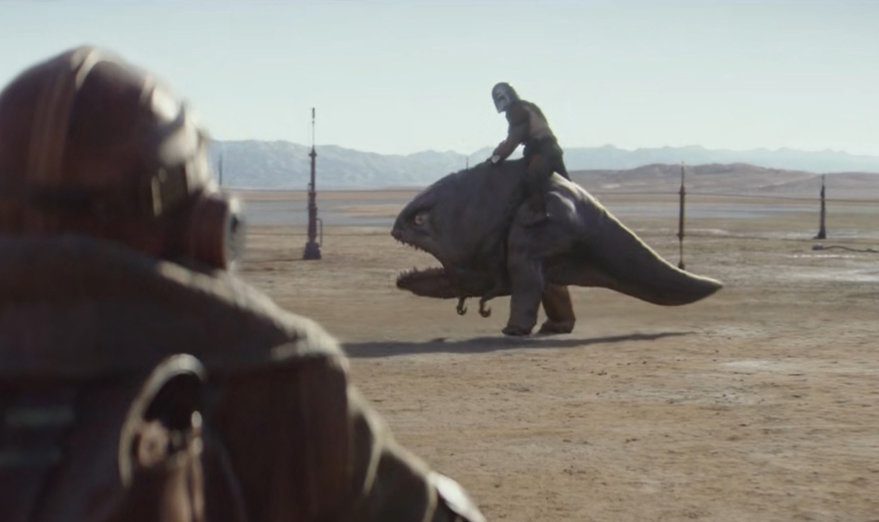 I know the Blurrg is a carryover from one of the sequels, but they didn’t have to put it in. It looks like one of the drawings your kid did that didn’t score high enough to make it onto the refrigerator. 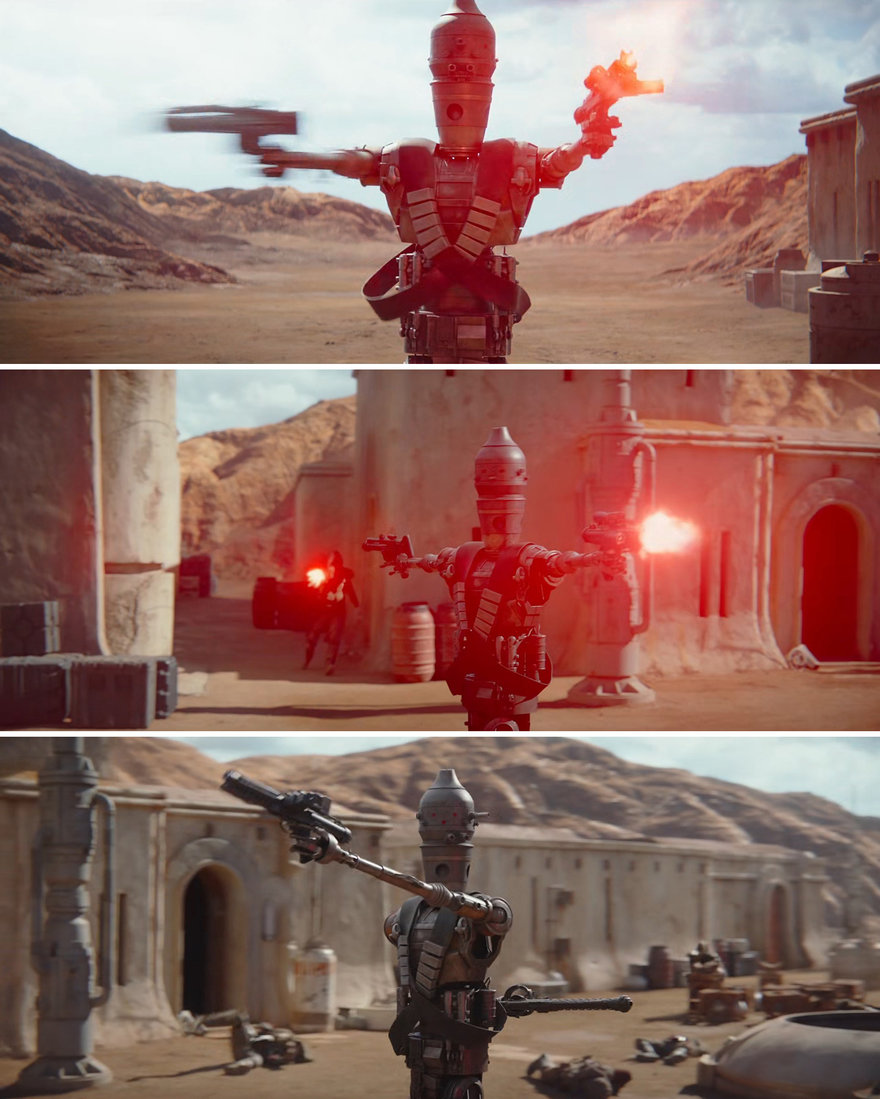 The IG-11 droid he meets has seen a lot of John Woo movies. He can also shoot both forwards and backwards at the same time, which is pretty bad-ass.

IG-11 also walks exactly like he was created by Boston Dynamics.

Don’t worry, I won’t spoil the final scene. And in all seriousness, what did the designers among you think of the show’s production value? And will you watch more?