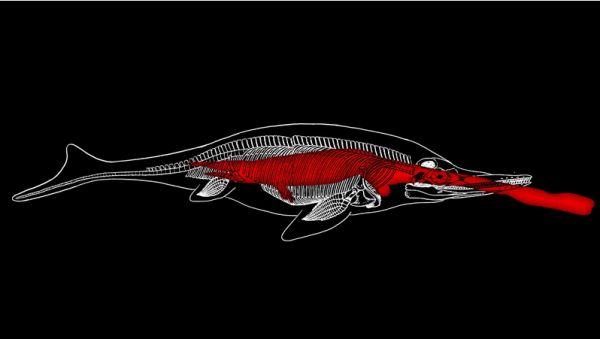 Big fish each the smaller fish, who eat the even tinier fish, and so goes the circle of life. It’s not only fish, but extinct sea creatures, too. A 240-million-year-old fossil found in China turns out to be a rare find- a fossil with the recognizable contents of its last meal inside.

The fossil, found at a quarry in Guizhou province of southwestern China, appears to show a 15-foot-long (5-meter) ichthyosaur (pronounced “ick-thee-oh-sore”) shortly after feasting upon a 12-foot-long (4-meter) thalattosaur. Regrettably, the ichthyosaur probably died shortly after its meal, having bitten off more than it could handle.

Ichthyosaurs were dolphin-like aquatic reptiles that emerged during the Triassic. This particular specimen belonged to an ichthyosaur species known as Guizhouichthyosaurus tangae, which grew as long as 33 feet (10 meters). Its presumed prey, a thalattosaur species called Xinpusaurus xingyiensis, was more lizard-like, with four limbs that it used to paddle through the water. The new fossil is the first direct evidence to suggest at least some species of ichthyosaurs were apex predators, similar to orcas today.

Read about the find, and the clues that hint at what happened all those years ago, at Gizmodo.

Rating A Sea Monster in the Belly of an Even Bigger Sea Monster is 5.0 / 5 Votes: 4
Please wait...
Loading...
Related articles