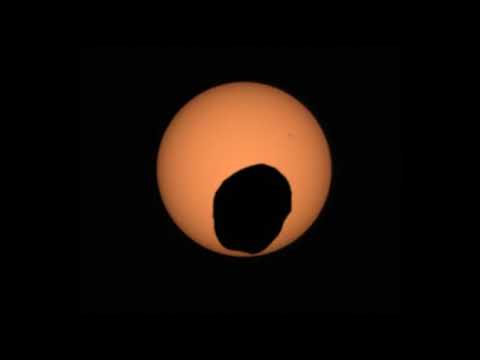 Mars has two moons, Phobos and Deimos. That gives the planet twice as many solar eclipses as Earth (yeah, it’s really more complicated than that). And now we have witnesses. NASA’s Perseverance rover recorded the transit of Phobos across the sun on April 2. Mars rovers have been recording eclipses since 2004, but this is the highest-quality video sent back to earth yet. NASA scientists, who received still shots from Perseverance earlier, were tickled with the resolution and color of the video.

Phobos is much smaller than our moon, and its orbit is much more eccentric. It’s also shaped like a potato. This video is not a time-lapse; the transit only took 40 seconds, much less time than any solar eclipse on earth. Phobos’ orbit is slowly disintegrating, which means it will spiral down to Mars’ surface, in a few tens of millions of years. So it’s a good thing we have video. -via Boing Boing