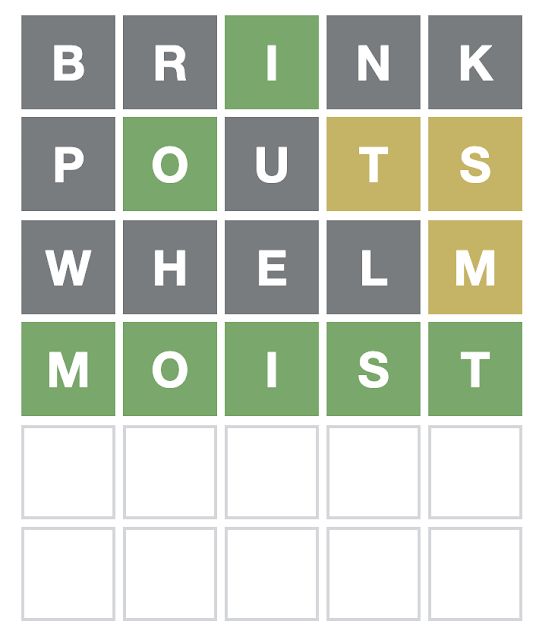 The game Wordle shows no sign of losing popularity, even as we hear the announcement that it was acquired by the New York Times. The newspaper said the game will still be free …for now. Better get in the game before it’s monetized! And computational biologist Devang Thakkar has developed Wordle  Archive so that you can play previous games or more than once a day. But how does one win at Wordle?

The object is to guess the five-letter word of the day. You have six guesses, and each guess will let you know whether a letter is right and if a right letter is in the right place. It would have never occurred to me to develop a strategy, but Minnesotastan did. While some folks begin with ADIEU to find the vowels, he uses words designed to cover the most common consonants. Those words are BRINK, CADGY, WHELM, and POUTS (although he switched to SPOUT upon learning that Wordle disallows a lot of words ending in “s” because they may be plurals). In the example above, he found the vowels in the right place in two guesses, and discovered all the consonants in three guesses. Read his thinking behind this strategy at TYWKIWDBI, and the strategies of others in the comments. This method won’t always ensure that you win in fewer guesses than the next person, but it will help you to get the right word more often. Do you have a strategy for playing Wordle?