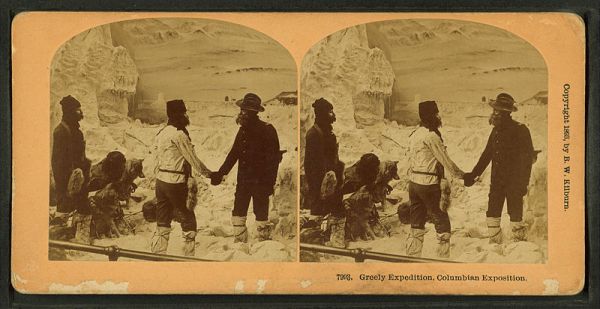 Eleven countries declared the year 1882-1883 as the “International Polar Year,” to encourage and highlight exploration of the far north. Those nations launched 14 expeditions to the Arctic, one of which was the Greely Expedition. Led by former Union officer Adolphus Greely, the expedition consisted of 25 men who set up a science observation station at Ellesmere Island near northern Greenland.

Things seemed to be going well, but the ship route to Ellesmere was only accessible for a short time during the summer. The rest of the time, ice blocked the passage, and ships ran a substantial risk of being trapped and broken if they tried to pass at the wrong interval. The expedition’s success depended on ships being able to reach the party with supplies and refreshed rations each August. One ship was due to re-supply the team in August 1882, and another would bring them home the following summer. Neither ship arrived—one could not pass the ice, and another sank after being crushed.

Depending on one shipment of supplies per year is a disastrous plan, especially before instant global communications. Read about the rescue of the Greely Expedition, a story sparked by the discovery of a caribou sleeping bag that P.T. Barnum saved from the incident, at Atlas Obscura.