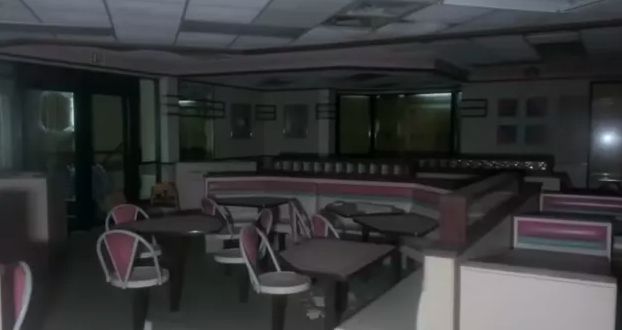 Urban explorer triangleofmass discovered a McDonald’s that was stuck in the 1980s. The YouTuber explored the abandoned McDonald’s, showcasing the aesthetic choices prevalent during its time. From the odd baby pink and blue color scheme (that is strikingly the opposite of the monochromatic and earthly colors restaurants employ these days) to the tiled walls and the bistro-style dining chairs, the fast food area looked like a retro diner instead of a fast food place:

In terms of wall art, what you’ll find are highly saturated nature scenes surrounded by a teal border. They are, of course, housed in a baby pink frame.

Lastly, you’re going to want to see the computers. If you grew up in the ’80s or ’90s, they will bring you right back to those decades with their bulky, cream-colored exteriors.

You might be surprised to learn that this particular McDonald’s location only closed down in 2007. However, according to YouTube commenter Dale Gibson, the location was last remodeled in 1986 to accommodate for salads being added to the menu.

Gibson adds that, according to the asset stickers in Triangle of Mass’s video, it would appear that the McDonald’s was abandoned because the sales volume was too low. Also, it would seem that the owner was not able to sell the store to another buyer.

Supporting Women and Saving the World One Bag at a Time

The Art Of (DE)Construction”: The Superb Collages Of Nicollages