City of the Seekers examines the interstices of art, psychology, philosophy, and spirituality in Southern California.

Last week, a closed-circuit video posted to YouTube showed a woman crouching down to take a selfie before knocking over a series of pedestals displaying an estimated $200,000 worth of art. Called Hypercaine after an EDM track by DJ Fresh, the installation is part of British-born, Hong Kong-based artist Simon Birch’s four-year art crusade, The 14th Factory, which features more than a dozen large-scale exhibits spanning three acres in a century-old warehouse in Los Angeles. The show is layered with themes of industrialization and commodification, but has since evolved into a commentary on the power of social media and art in the digital age.

Offering endless backdrops for selfies, The 14th Factory is a multidimensional, immersive art experience. Yet not only have visitors been interacting with the exhibits by taking pictures: in the case of the ill-fated selfie, the exhibit responded. The YouTube video has since become an unexpected piece of art itself, serving as the finale to The 14th Factory‘s enormously successful run in Los Angeles after drawing more than 65,000 visitors since its debut March 11—almost all thanks to social media. 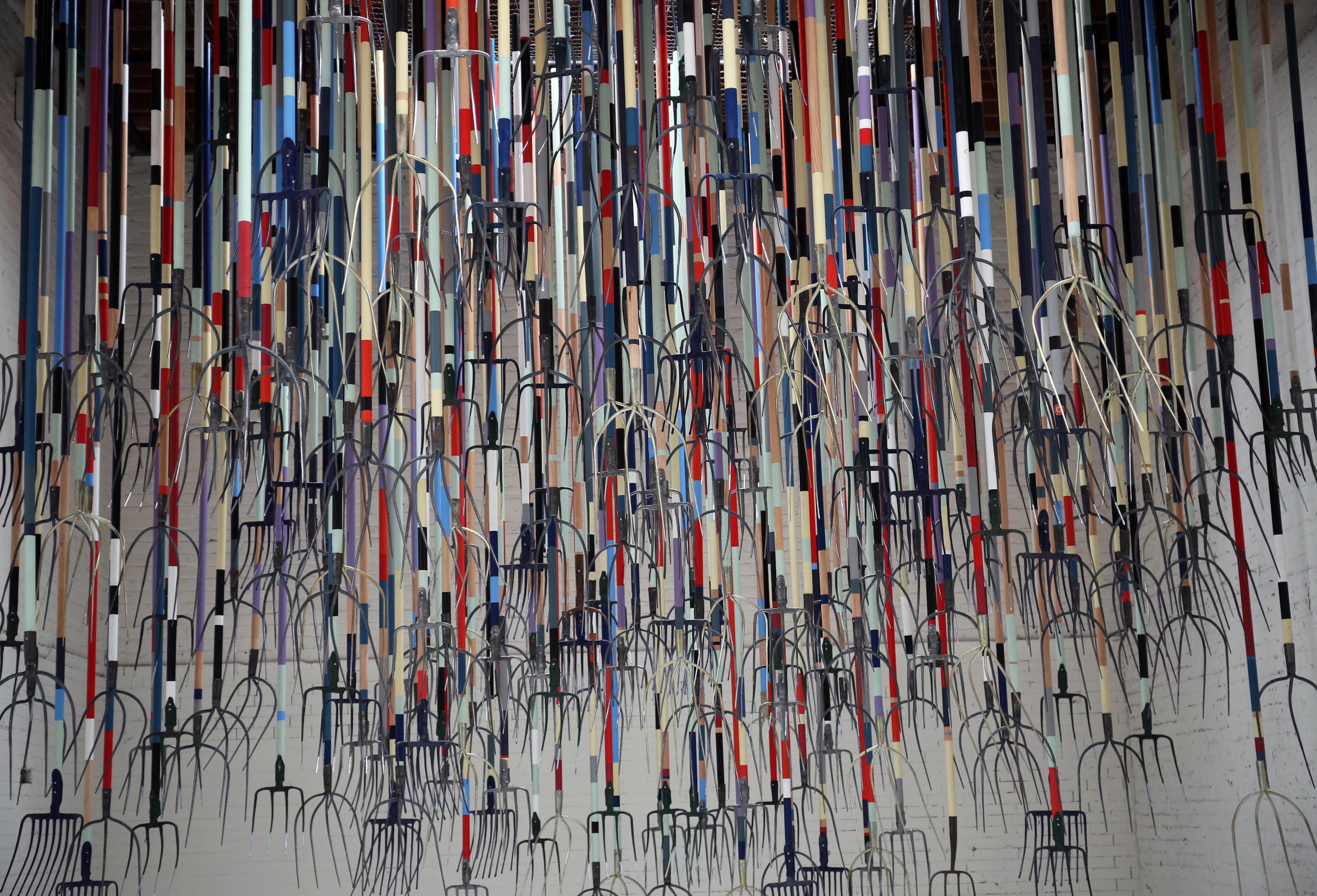 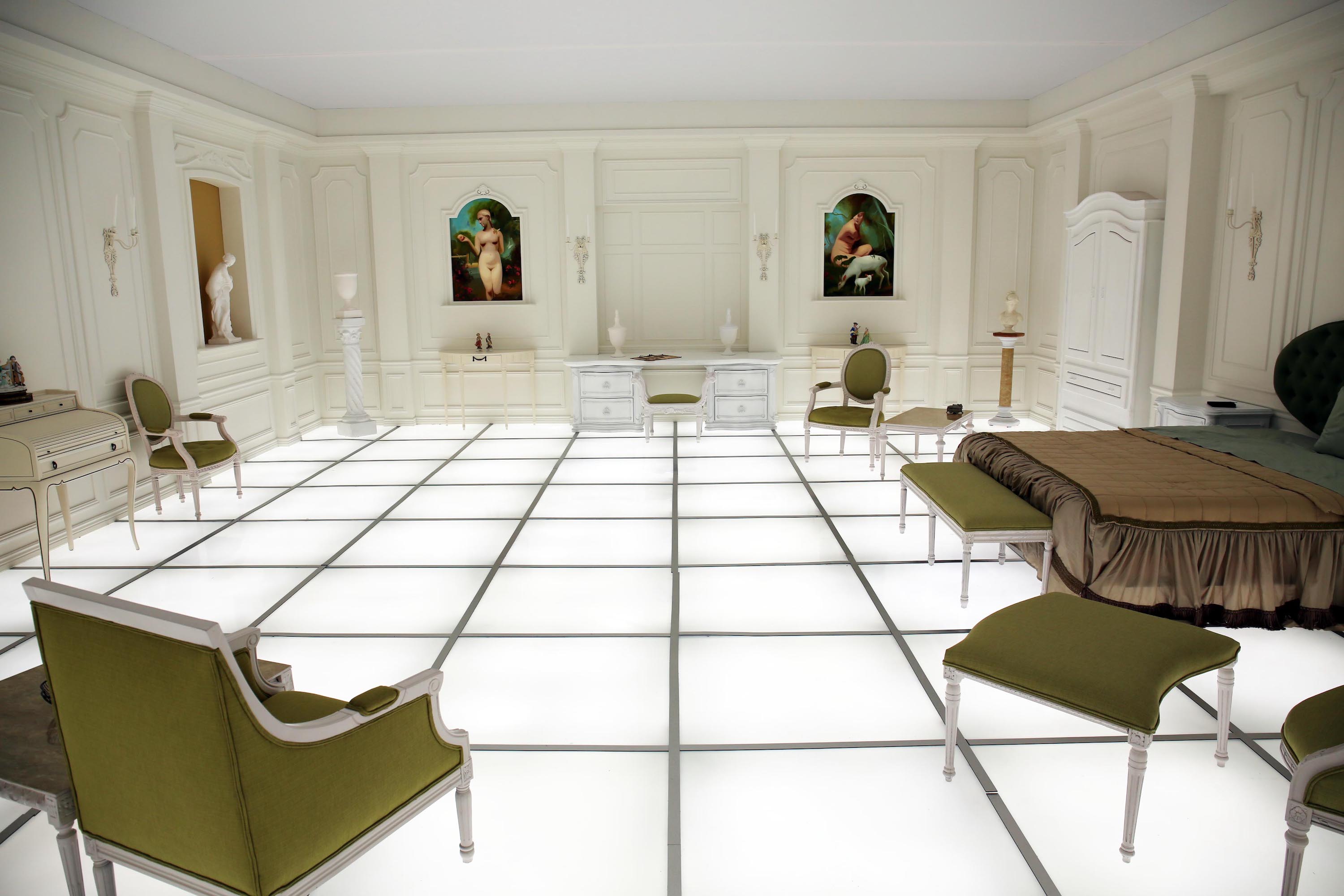 Most portraits and selfies from The 14th Factory have been taken in two exhibits. The Crusher is a site-specific work from Birch featuring 300 salvaged pitchforks suspended from the ceiling, their handles painted in tribute to the colors of cars that have been crashed by artists and celebrities. Rings on the handles recall growth rings on trees, representing the recyclable components of industrialization and war.

The second and most ubiquitous social media backdrop from The 14th Factory is The Barmecide Feast, a faithful recreation of a set in Stanley Kubrick’s 2001: A Space Odyssey, built to scale and located inside yet another mixed-media exhibit made from wood, foam and paint called The Meteor. Interestingly, The Barmecide Feast was made in collaboration with KplusK Associates, whose founders, Paul and Johnny Kember, had relatives who actually worked on Kubrick’s films. The title of The Barmecide Feast refers to a story from the Arabian Nights in which a sultan hosts a feast with no food and asks his guests to imagine the feast instead. 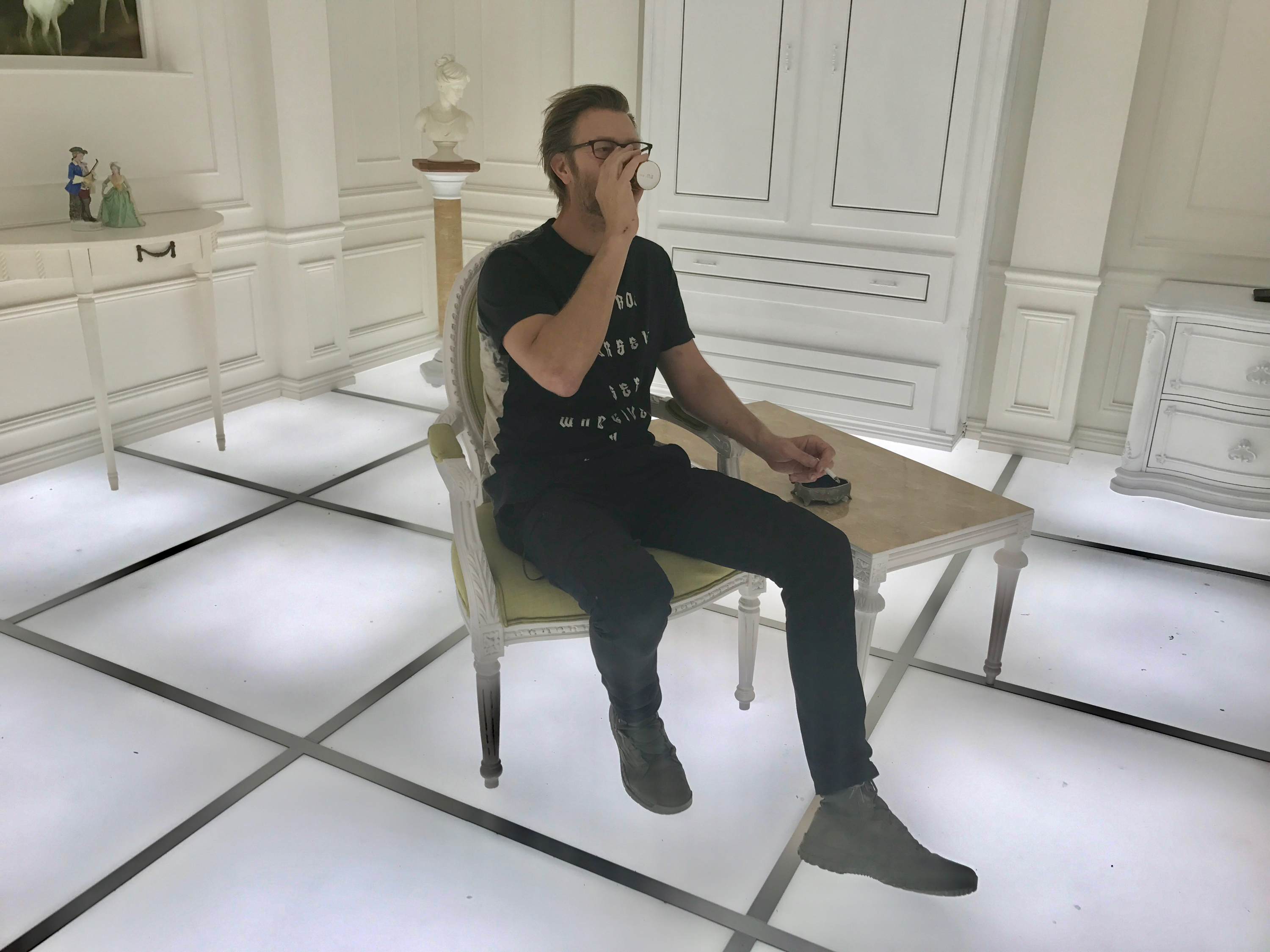 In a statement following the incident, Birch writes that as a nonprofit, his organization doesn’t have a budget for staff or security, and can’t afford to pursue litigation against the culprit. “She was horrified and super upset, and we took down her details, but decided not to take action as it was clearly an accident and she’s a student,” he explains. “We fixed most [crowns], but there are a few delicate ones that are still in the process of being repaired and might be permanently damaged.” 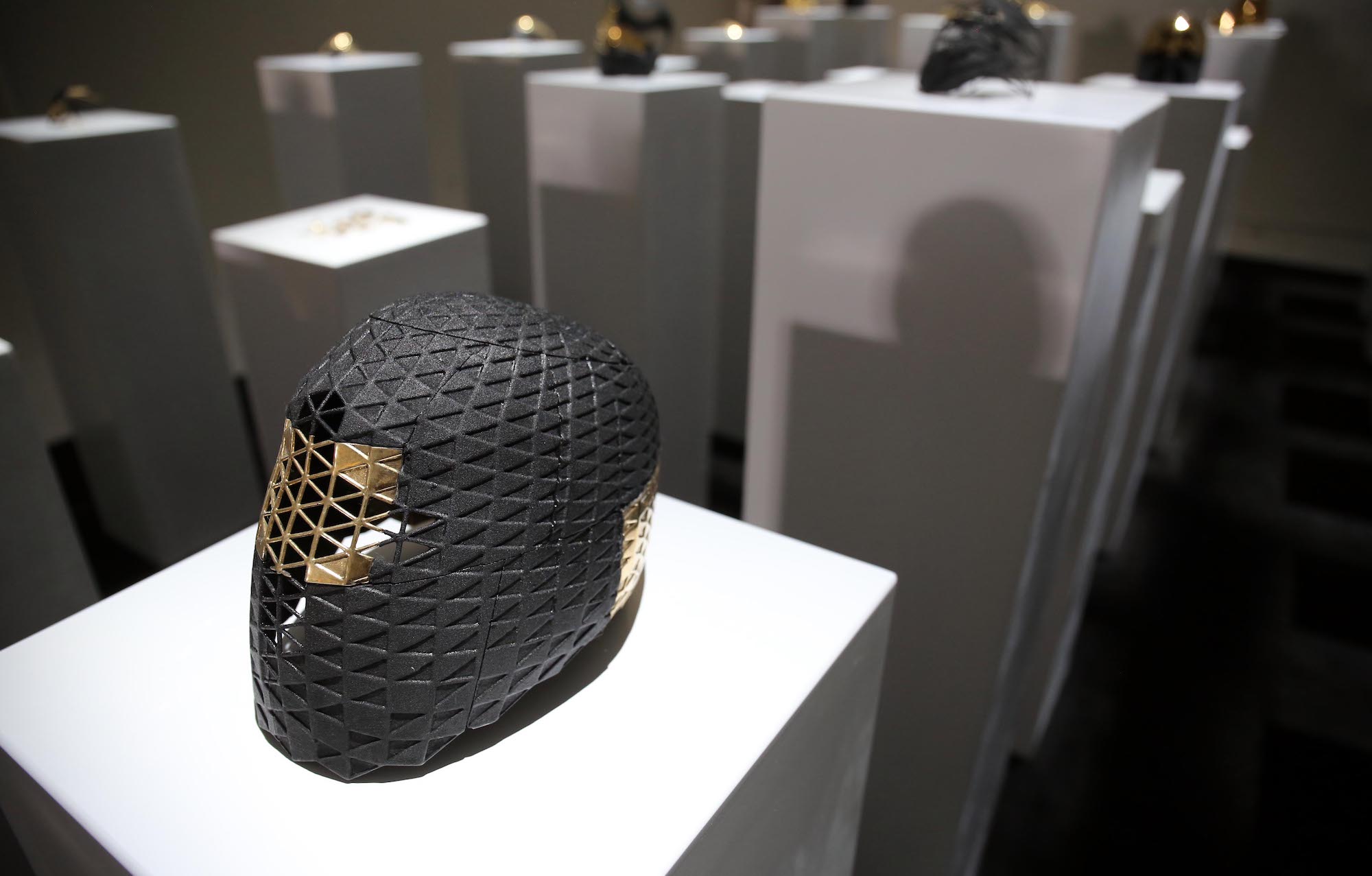 Birch created Hypercaine in collaboration with artists Gloria Yu, Gabriel Chan, and Jacob Blitzer. The installation features four rows of crowns made of different material, from brass and metal to marble, stone, wood, and nylon. The headpieces range from traditional to avant-garde in appearance, some rendered delicately with precious metal, while others are made with the help of 3D printers. Together, they represent the tenuous and ultimately frail nature of power. 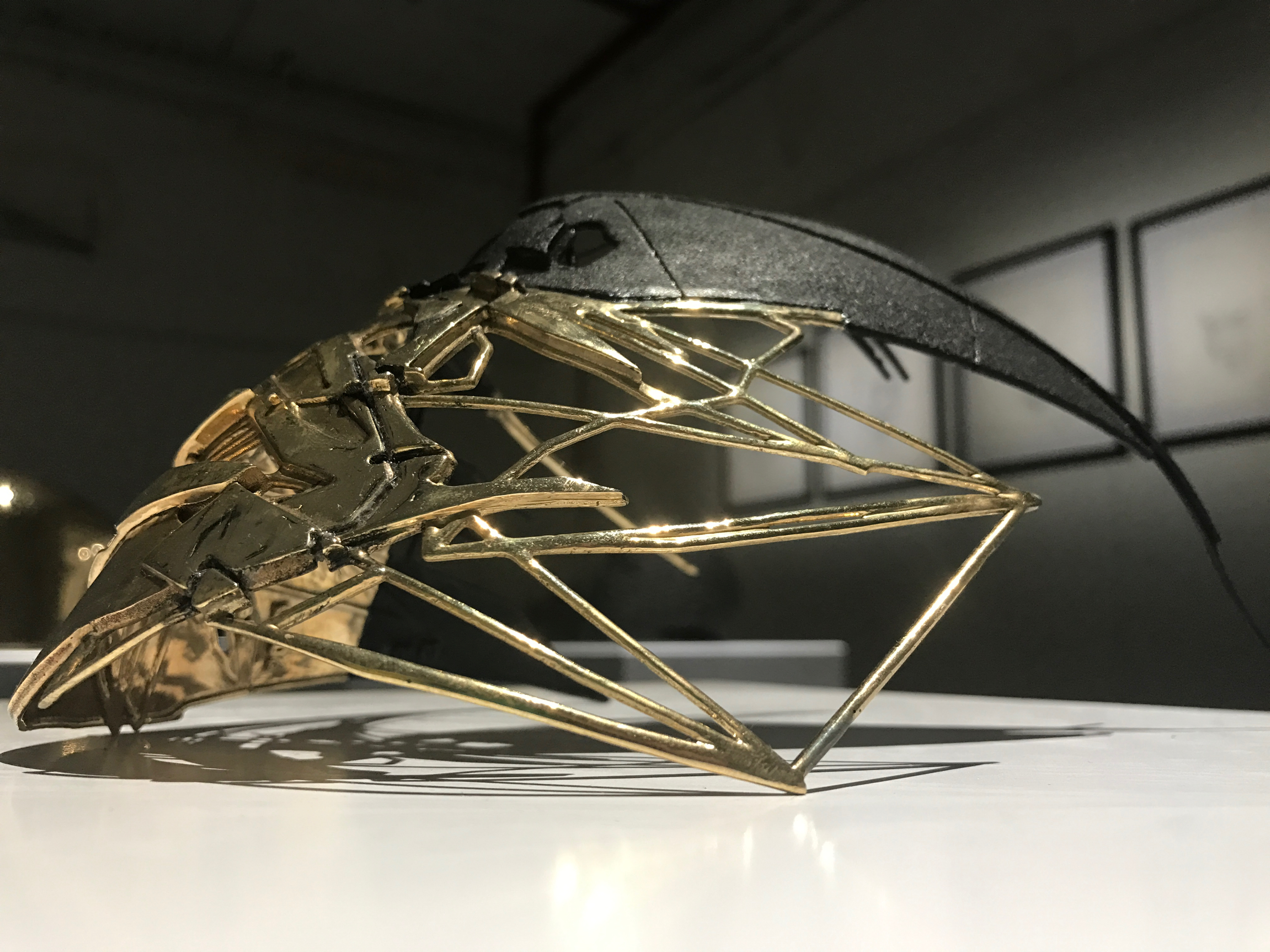 “People ask why the plinths were not bolted down,” Birch notes. “Well, people are warned to be cautious in that room but the idea was that they should be delicate, exposed, and fragile. They are crowns, and crowns—symbols of power, are fragile things. A well-timed selfie could bring down a president. And anyway, you can do your best to make things idiot-proof, but eventually someone will make a better idiot.” 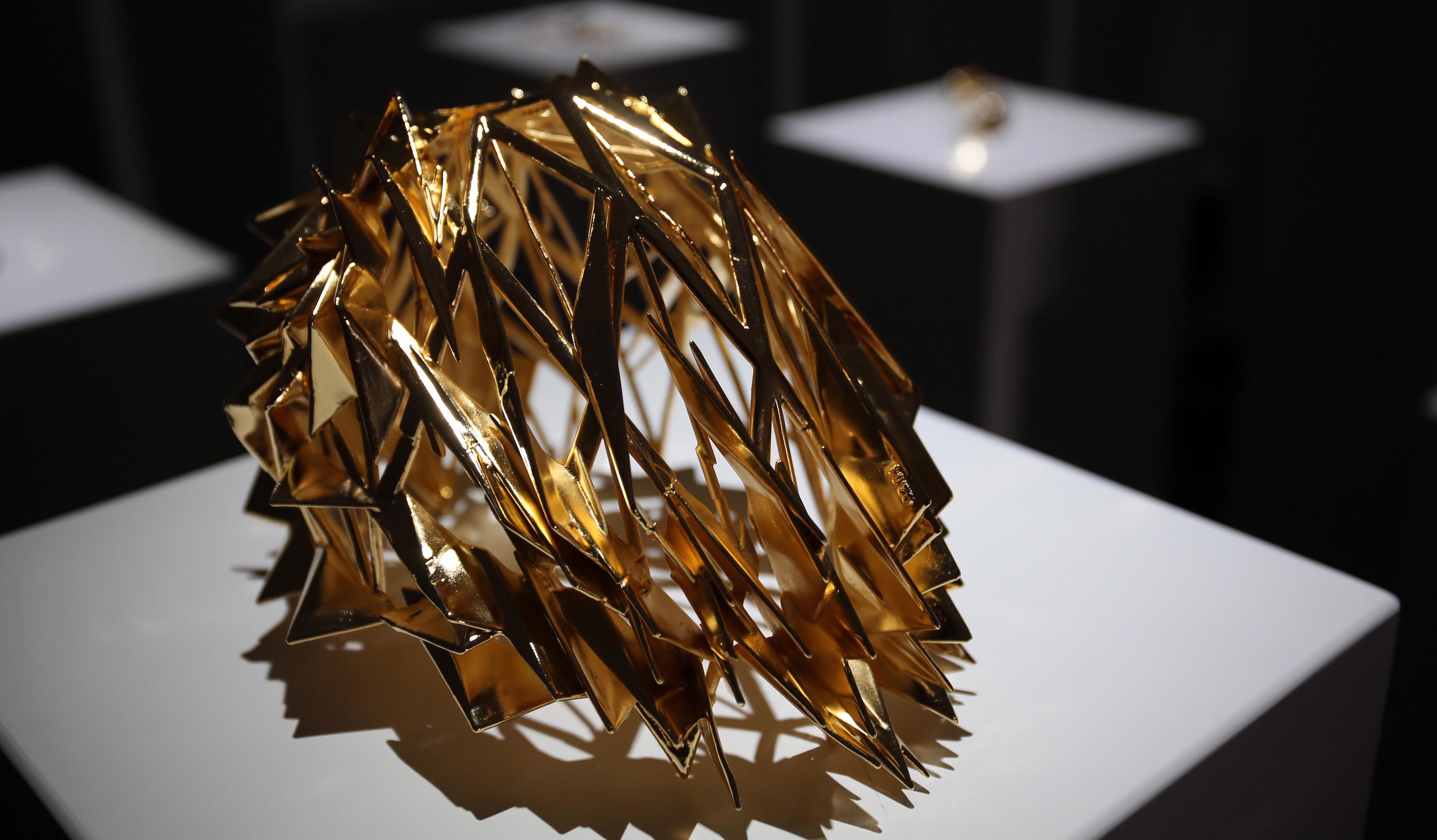 As it was of internal footage and posted by Birch’s buddy, according to the YouTube description, it’s apparent that Birch had a hand in deciding to post the video. Just as with the endless social-media posts from public visits to The 14th Factory, the reaction has likely generated even more interest in the show, which has been extended twice. In the end, the artist recognized an opportunity to promote his brainchild before it finally closes for good July 30. 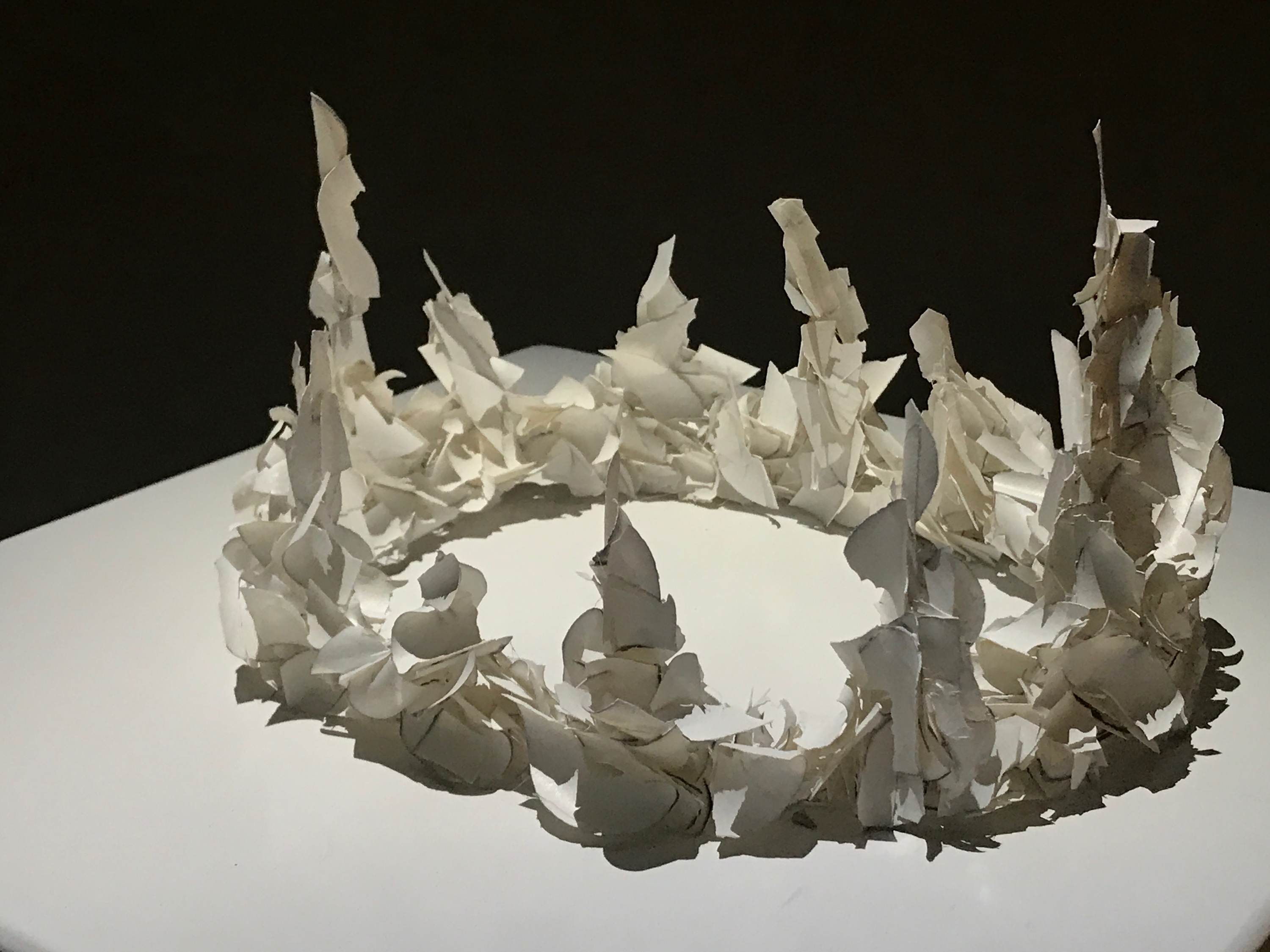 “It’s a 150,000 square feet space full of art built by myself and a brilliant group of collaborators, so the crown incident was not the end of the world after so many challenges,” Birch concludes. “Fortunately, The 14th Factory has been a huge success. It is also a wonderful example of the power of social media—as we barely had any budget for marketing when we first opened so social media was at times our only way of attracting audience. So no complaints.”

No complaints from the audience, either—except maybe the clumsy student.

Quirky, Curious Sculptures Probe the Dark Side of American Culture | City of the Seekers

The Stellar Legacy of L.A.’s Gemini G.E.L. Printmakers | City of the Seekers