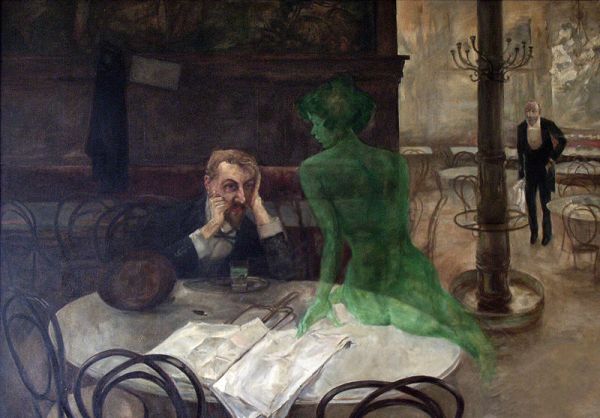 Absinthe is a liquor that gained a very particular reputation in the 19th century, as it was adopted by the artistic community of Paris, then spread to fashionable society, and then finally became affordable enough for commoners. The fancy rituals of serving absinthe and its supposedly hallucinogenic effects gave it a cachet of forbidden fruit that many wanted to experience. The website Victorian Paris gives us a rundown of the rise and fall of absinthe, including the backlash that got the drink banned in several countries.

Discussions followed discussions. Petitions were signed. The vise slowly tightened around absinthe. The straw that broke the camel’s back was a series of particularly brutal family murders for which absinthe was blamed – largely unjustly. For instance, preceding the crime, one of the murderers drank not only two glasses of absinthe but also a mint cream, a cognac, six glasses of wine to water his lunch, another glass of wine after work, a cup of coffee with brandy, a liter of wine on the way back, then another coffee with brandy. Only absinthe was blamed for his murderous dementia.

Intrigued, I Googled “absinthe murders” and found Jean Lanfray. After a day of drinking, he shot his pregnant wife and two young daughters. Lanfray also shot himself, but survived to be convicted of the murders. The publicity surrounding the case, promoted widely by temperance organizations, led to a ban on absinthe in Switzerland beginning in 1910. Although absinthe originated in Switzerland, the ban remained in effect until 2005. -via Strange Company