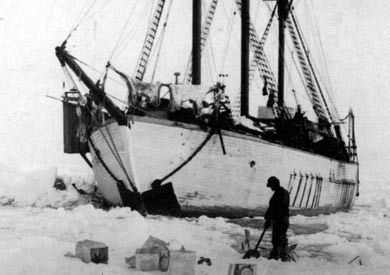 In 1918, polar explorer Roald Amundsen set off on a research voyage to reach the North Pole via the Northeast Passage, on a ship he’d commissioned and named Maud. The expedition was one disaster after another, but the unfortunate life of the Maud was only getting started.

From Alaska, the idea was to drift the ship over the North Pole, but poor ice conditions ultimately forced Maud south to Seattle to undergo extensive repairs. Once Maud was repaired, rather than try to ice drift again, Amundsen got distracted by the idea of flying an airplane over the North Pole and instead used Maud to haul aircraft to Alaska for the attempt. It never worked out, and by 1925 Amundsen was broke and forced to sell the ship to the Hudson’s Bay Company. The firm rechristened it the Baymaud and used it as a floating warehouse and later a radio station, one of the first in the Arctic, before the ship sank in the pack ice in 1930 in Cambridge Bay, Nunavut.

The ship lay at the bottom for 86 years, but has been recovered and has been made into a museum at a port in Norway. Read the story of Amundsen’s jinxed ship at Smithsonian.

This Piranha Plant Will Light Up Your Day

A Tiny Llama For The Great Inca Gods

Has Natural Language Processing Been Chasing The Wrong Goal The Whole Time?