It’s nice when you find a job that you actually enjoy, because your whole life becomes more enjoyable as we spend so much of our days at work. Sometimes you even feel like coming in earlier or leaving later because you like being in the environment and you feel a sense of fulfillment from finishing your tasks.

Even if you do it for your own satisfaction, people still secretly hope that the higher-ups will notice it and appreciate their efforts. But it’s not always like that. Reddit user ennovyelechim told a story how they were an exemplary employee but when it came to receiving a favor from their manager, they were bitterly disappointed. 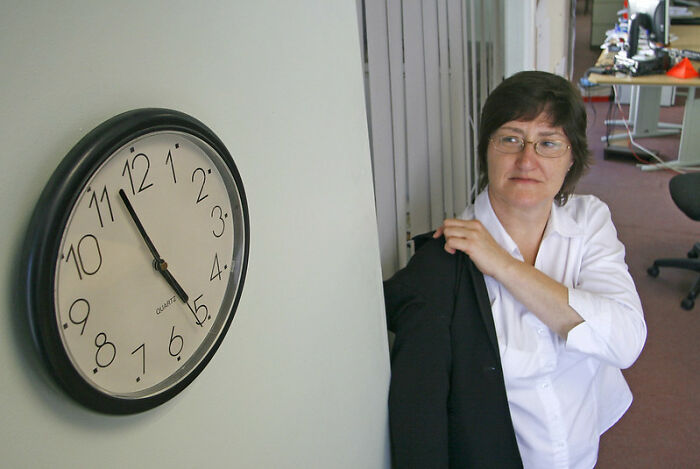 The Original Poster (OP) doesn’t work at the said company anymore, but when they started, they were an employee that any company could wish for. They were always at work on time and would start working as soon as they got there. If they had anything to finish up at the end of the day, they would do that even if it meant they had to stay a little bit over their contracted hours.

The employee explained that they didn’t mind doing that because they did it for the better good of everyone and they were not exceeding their work hours that much. They were glad to spend those extra 20-30 minutes of their day working as they liked the company and liked to leave knowing they’d finished their job.

It lasted for 2 years until one day, ennovyelechim had to leave earlier as they got a call from the hospital that their father in law was living his last hours. The OP left at 3:45 after informing their manager and didn’t think much of it as they thought they had made up for that time by leaving later on other days.

However, the company didn’t see it that way and paid only for half of that day. The image that the OP had about the company was shattered and they stopped caring about loyalty or feeling they needed to work for the benefit of the company. From that day, for the next 5 years they stayed at the company, the employee only worked the hours they were contracted.

Not only that, but when they overheard a manager talking to a new employee and making a comment how they hated ‘clockwatchers’ because that showed no loyalty to the company, the OP intervened to sarcastically remind the manager how they were treated when they had to leave and say goodbye to a deathbed-ridden loved one.

It must have made an impression on the staff as everyone began sticking to their work hours precisely. The OP believes that the company had to lose a lot of extra hours that the employees voluntarily worked without getting paid and all of that was over not being able to show a little bit of compassion.

Bored Panda reached out to an Adjunct Professor (Lecturer) James M. Lager, teaching ethics to graduate students at the University of Maryland’s Robert H. Smith School of Business to evaluate this situation and he said that “Employee engagement and commitment can make a business more profitable, and treating employees like objects (as was done here) diminishes how much an employee will actually produce and lead to a “work to the rule” attitude and approach. And there is research that shows being ethical is good for the bottom-line in the long run.” 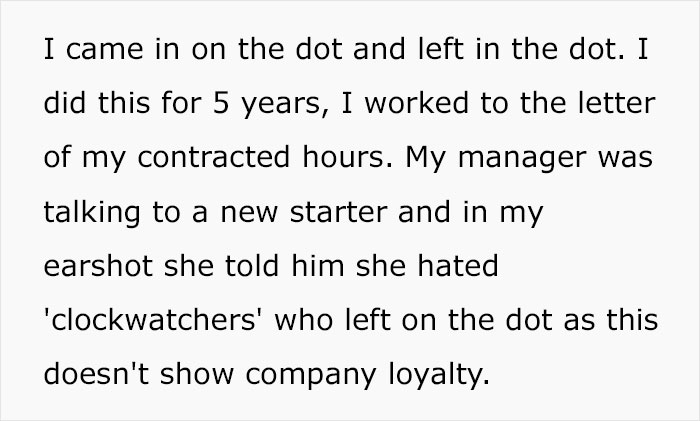 After having read the story Professor Lager noted that as an hourly employee, the law probably requires the employee to be paid by the hour. He continued, “If the employment is at-will, then either party can end the employment relationship anytime they like for any nondiscriminatory and lawful reason. It’s likely illegal for an employer to look the other way while the employee works extra time without compensation.” 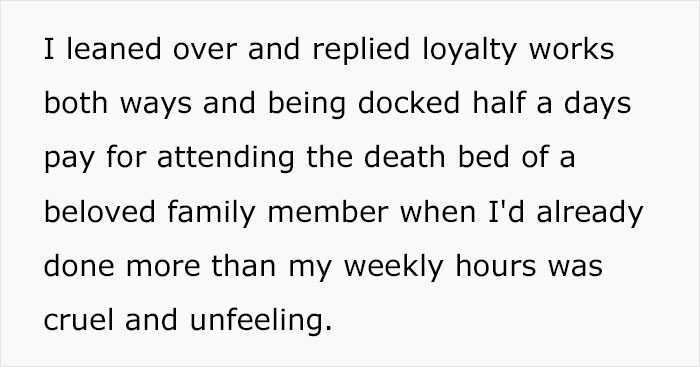 But that really showed the real face of the company and from then on, the redditor worked only their contracted hours, not letting the company abuse their hard work

The employee wasn’t ever forced to work more than their contract said and the manager was right: it was their decision. But after all those years of honest and hard work, you would expect the company to trust you more and let some things slide.

We asked Professor Lager was it ethical for the company to pay less for that day the employee left for an emergency and he told us that ethics and law don’t always overlap. “The underlying relationship between the employer and employee should reflect an aspect of fairness—a foundational ethical principle everyone agrees with to some extent. So what is ethical here depends to a great extent on whatever agreement, written or otherwise, exists between the employer and employee about reciprocal obligations and duties. At first, both parties tacitly agreed that the employee would stay until the work was done—that seemed fair! When an emergency arose, however, the employee wrongly expected the employer to behave like a caring human and allow the time off. Unfortunately, the employer had a different idea about their obligation to the employee, and decided to treat them as an income-producing unit—which the law permits.”

What is your take on this story? Do you think the company was right in not paying for the whole day when the OP left earlier, because rules are rules? Or do you think that the company could have be more lenient as the employee always did their job well? Tell us in the comments! 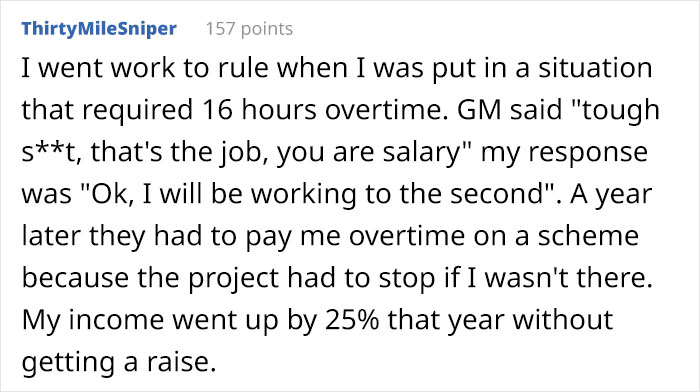 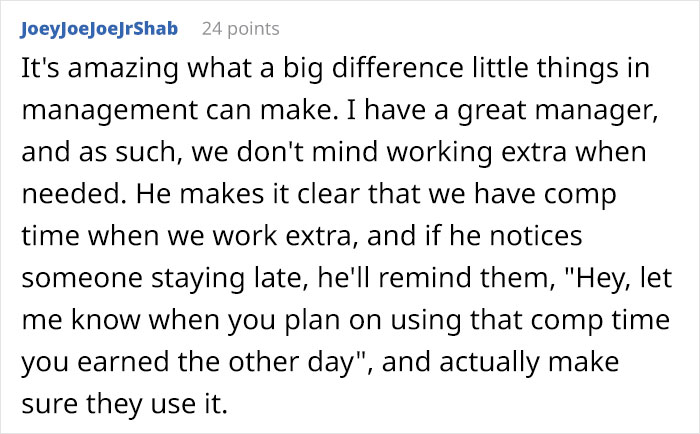 The post After Not Receiving Loyalty From The Company, Employee Starts Leaving Work Right On The Dot, Maliciously Complying With The Manager’s Views first appeared on Bored Panda.