Now, don’t get me wrong, disagreements and misunderstandings are bound to happen in every household; after all, we’re only human. However, there are some things to which you frankly cannot turn a blind eye.

According to a Forbes article that was published back in 2019, “70%-80% of Americans consider their families dysfunctional”, meaning that an alarming number of people know what it’s like to have an unhealthy dynamic with their flesh and blood.

Perhaps it’s your critical mother who makes it her responsibility to comment on your appearance every 2 to 3 minutes, an absent dad who makes no effort, or as in this case, a troubled relationship with your in-laws – overcoming such issues is not always easy.

Many people might believe that cutting ties would be the best course of action, and while it will most likely do wonders for your overall well-being, often one simply cannot afford to do so. 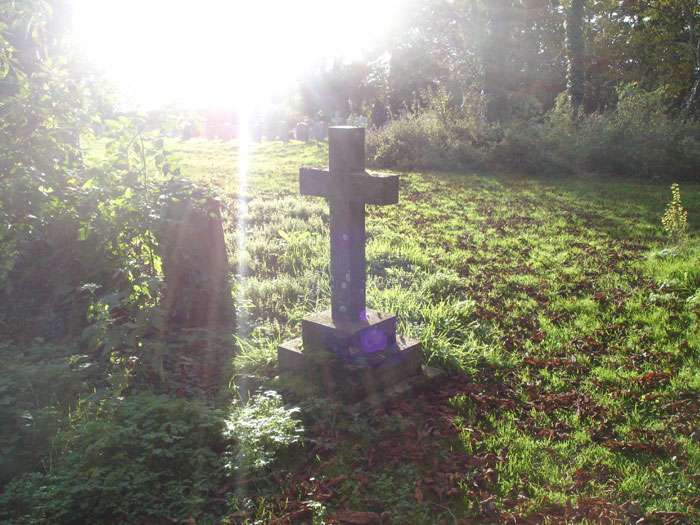 “AITA for only taking my nieces in and not their dad after my sister passed away?” – this netizen turned to one of Reddit’s favorite communities wondering whether she’s indeed a jerk for taking in her late sister’s children but not their father. The post managed to garner over 15K upvotes as well as 5.1K comments discussing this unfortunate and rather confusing situation. 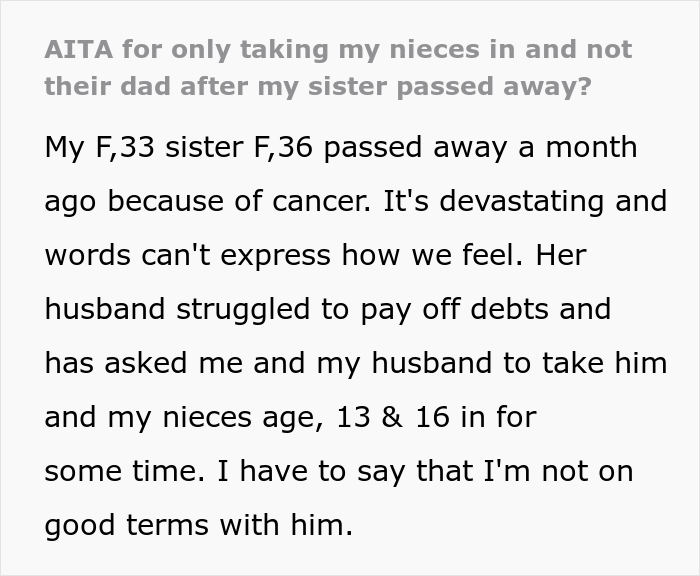 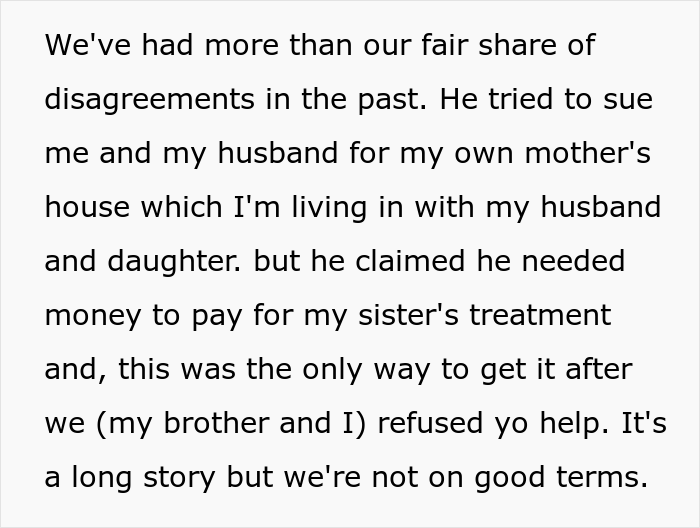 The woman started her story off by saying that her older sister recently passed away after battling cancer.

Her husband struggled to pay off debts, so he asked the author of the post and her spouse if they could take him and his children in until they got on their feet.

Now, the woman admitted that she and her sister’s partner have a strained relationship. Turns out, he tried to sue the couple for the author’s mother’s house where she currently lives with her family – however, he explained that he needed the money to pay for the cancer treatments and, apparently, this was the only way he could get it since the couple “refused” to help. 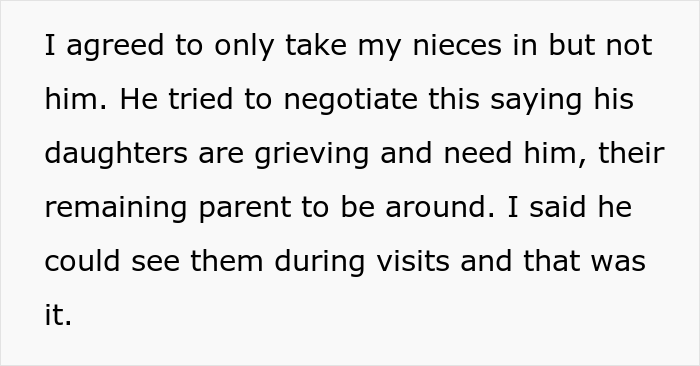 The woman only agreed to take her nieces.

The brother-in-law tried to negotiate, saying that his children needed him because they’re still grieving – however, the author bluntly said that he could see them during visits.

Days later, when the guy showed up with his daughters, the woman let them in but turned him away after he once again tried to persuade her into letting him stay.

The woman refused to take in the man, as he once sued her over the house that she’s currently living in 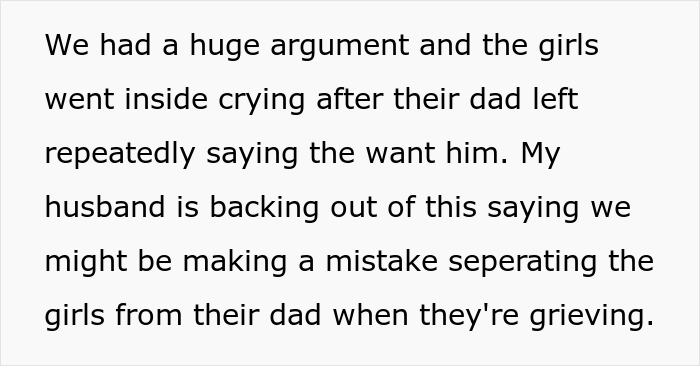 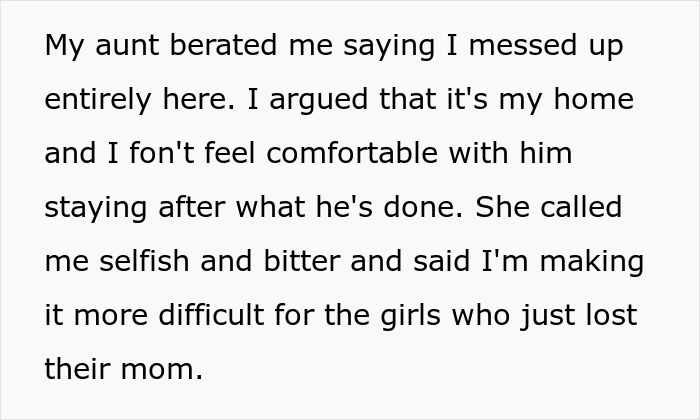 The refusal caused an uproar among family members and even made the girls cry.

After the fight, the author’s husband began to back out and question whether they were doing the right thing by separating the already hurting family.

The woman then revealed that she was later scolded by her aunt. She was told that she “messed up entirely” – however, the author argued that it was her home and that she didn’t feel comfortable with him staying after what he’d done. 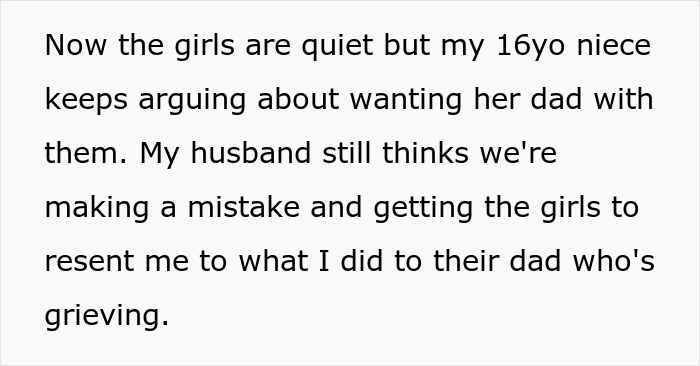 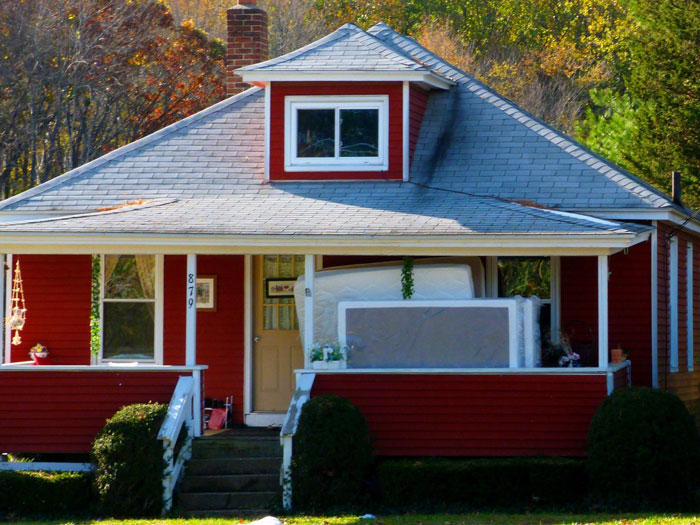 The aunt called the woman “selfish” and “bitter” (which really feels like it’s the case) and claimed that she was overcomplicating things for her poor nieces. It was said that the girls calmed down a little – however, the eldest one kept bringing up their dad and him not being there.

Fellow Redditors were quick to share their thoughts on this situation 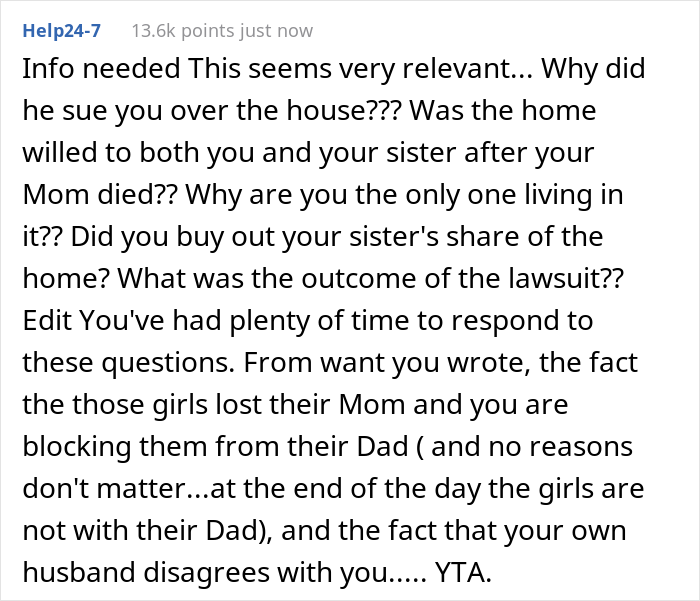 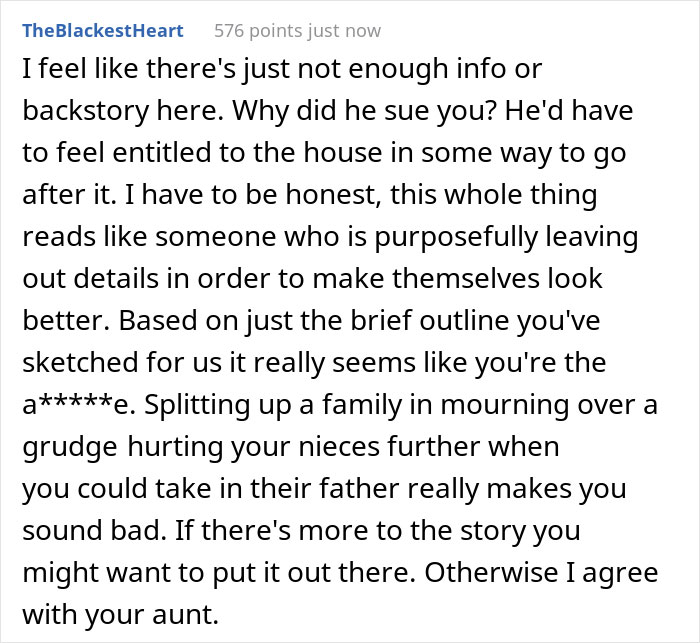 Many sought further details, while others supported the woman and argued that since it was her home, she had every right to do so 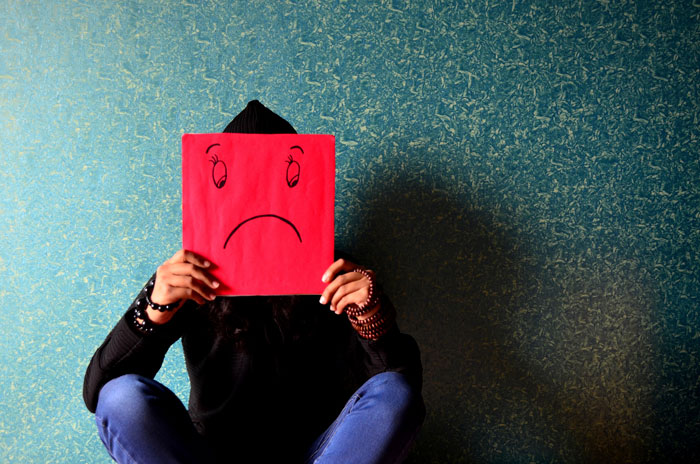 The bulk of the community members requested a backstory or further information about the whole house lawsuit situation from the author.

Netizens felt like the post was rather one-sided and even accused the author of purposely leaving out details for the sake of gaining support. Some said that even if it was the case, and the woman actually felt uncomfortable with letting her brother-in-law stay (and wasn’t just bitter), at the end of the day, separating a grieving family isn’t the best choice.

What is your take on this post? Would you handle things differently? 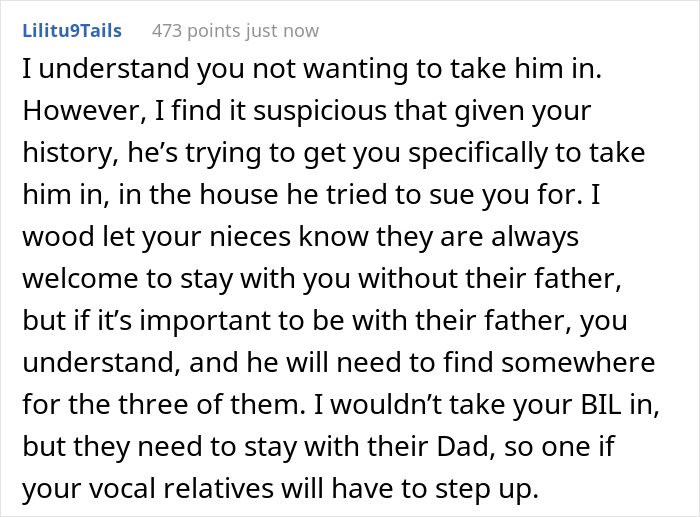 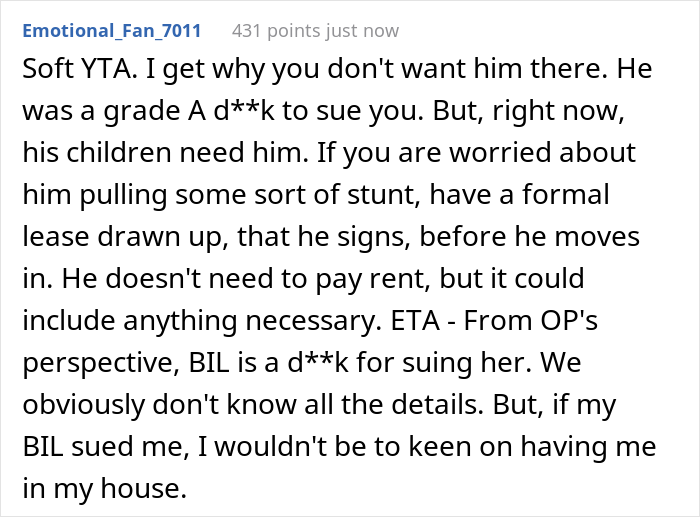 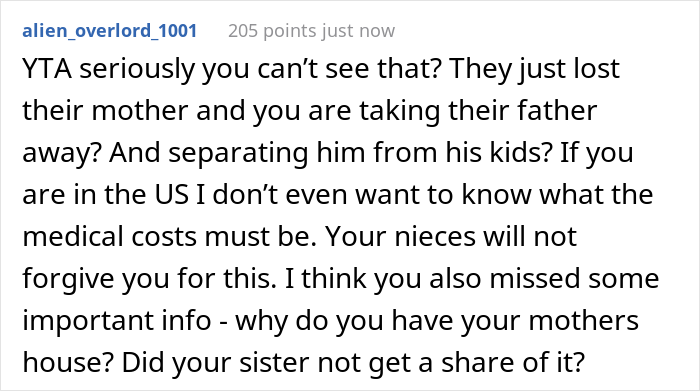 The post “AITA For Only Taking My Nieces In And Not Their Dad After My Sister Passed Away?” first appeared on Bored Panda.