Most countries in the world celebrate Mother’s Day on the second Sunday of May. Traditionally, the day is spent with family doing fun activities together and children showing appreciation to their moms for always being there for them.

But does anyone ask what the mom wants? How does she want to celebrate her day? It probably happens rarely, as we could guess after reading the comments talking about a story posted by Reddit user BadMomsChristmas. She was planning to spend the day alone and people mainly expressed their envy, but the mom posed the question of whether she’s being a jerk in the first place as she heard other reactions in real life.

A mom gets an opportunity to spend the Mother’s Day weekend alone, but starts to feel guilty for not spending time with her children after hearing people’s reactions 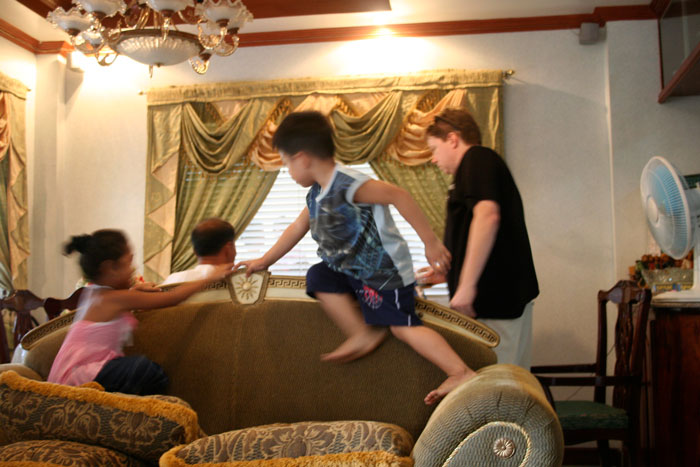 The Original Poster (OP) is a mother in her 40s who has kids going to elementary school. It goes without saying that she loves her kids regardless of if they misbehave or are the sweetest angels at times.

She also has a loving husband who is greatly involved in raising the children together, he actually does a significant chunk of housework, and this dynamic works out fine with their work schedules.

Even though they are a happy family that could go on a postcard, being a parent, a spouse and an employee sucks the energy out of you no matter how happy you are. Especially when the children are little and they require a lot of attention.

The OP confesses that she feels tired. Her days start with her dropping off her children at school and that just means chaos every morning because there is always something going on with the kids. 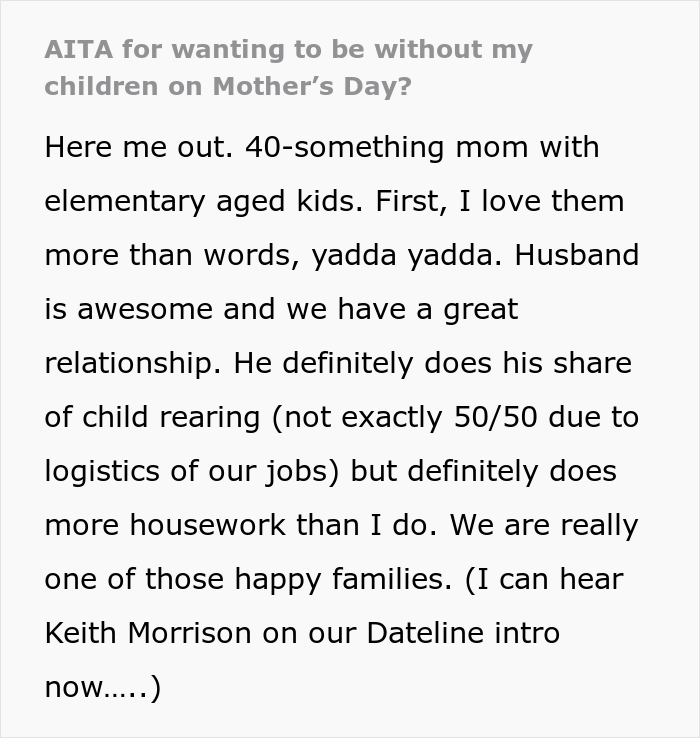 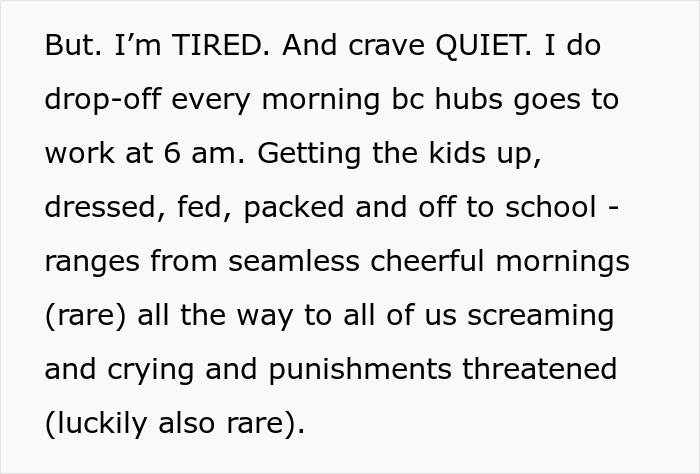 After a hectic start to the day, the OP goes to work and her job involves talking to people most of the time, which she describes as ‘semi-demanding.’ We can only assume that the evenings are quite busy too and even though the weekends are more chill, the mom gets only a couple of hours to relax if the kids have something to do.

A survey conducted by the food delivery service Munchery found that moms get only 32 minutes a day of me time. Another survey commissioned by Campbell’s Well Yes! Sipping Soups showed that 53 percent of mothers would sacrifice sleep to be able to fully execute their parental duties and 47 percent of them would give up date nights, hobbies and nights with friends. They would also eat more on the go and less nutritional food just to save time, at the same time making sure their kids are eating properly.

But having kids of elementary school age is exhausting and on top of that, the mom works a reasonably demanding job full-time 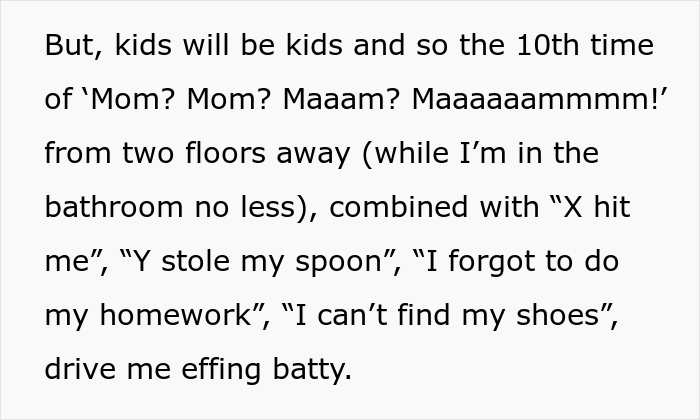 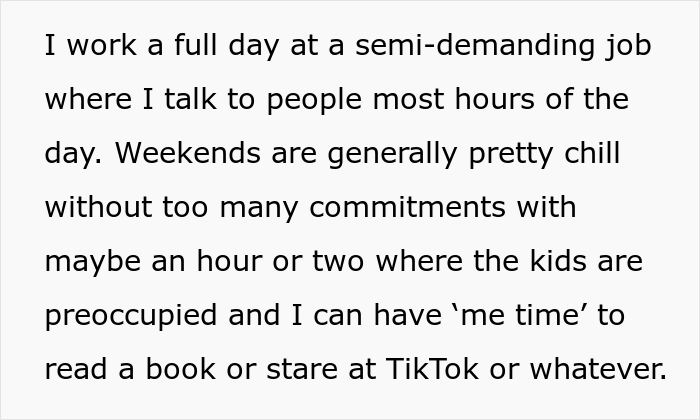 So for Mother’s Day, her husband suggested to take the kids to his dad’s house, which the OP thought was a great idea 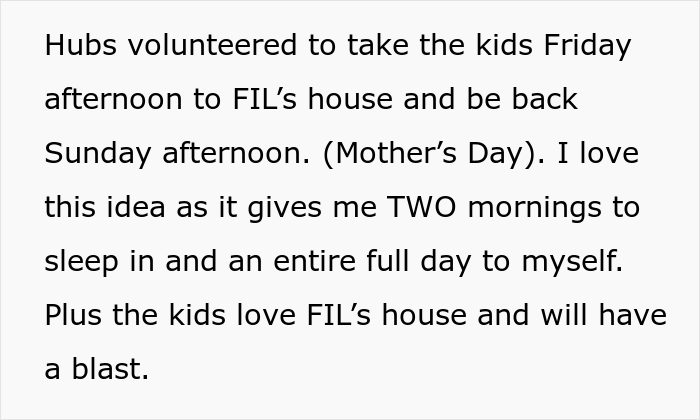 Working hard is admirable, but everyone not only deserves but needs a break. So OP’s husband decided to take the children to his dad’s house for the Mother’s Day weekend. According to the mom, the kids love being with their grandad so not only will she enjoy a weekend alone, the kids will have fun as well.

In her mind, everything seemed fine, but the reactions she got from the people she knew were quite unpleasant as they accused her of not loving her children because she wouldn’t wake up to their hug on Sunday. Not only was her love for her children questioned, but people called the dad a jerk for taking the kids to his family. 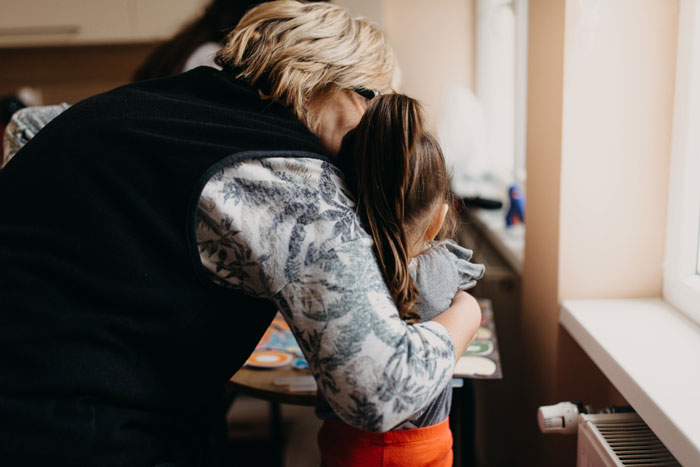 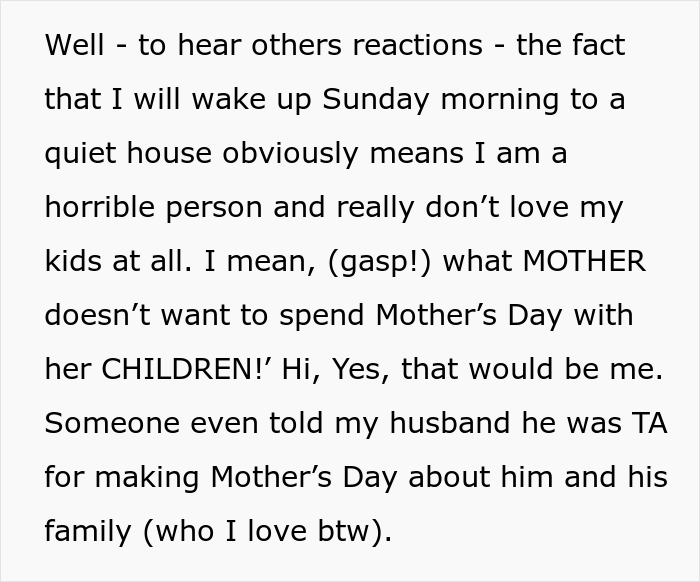 But what shows that she is a good mother is her children’s behavior. In one of the responses to the comments, the OP said that when her kids found out they would be leaving for the weekend, they hugged her and said ‘Happy Mother’s Day!’ in advance because there isn’t a bad day to show appreciation to your parents.

Also, what this told the OP was that her children realize this day isn’t about them, but about their mother and her wishes.

The OP still wants to have that time to herself and she will, but she doesn’t know if she should feel bad for having it because of the things that were said to her and because she could choose any other weekend other than the one when moms are celebrated.

The response in the comments was really positive as they wished someone would allow them to have a weekend off just for themselves. They believe that the holiday is dedicated to moms so it’s their decision how they want to celebrate it.

But after being called a horrible person and accused of not loving her children, the mom wondered if she was the only one who thought this was a good idea 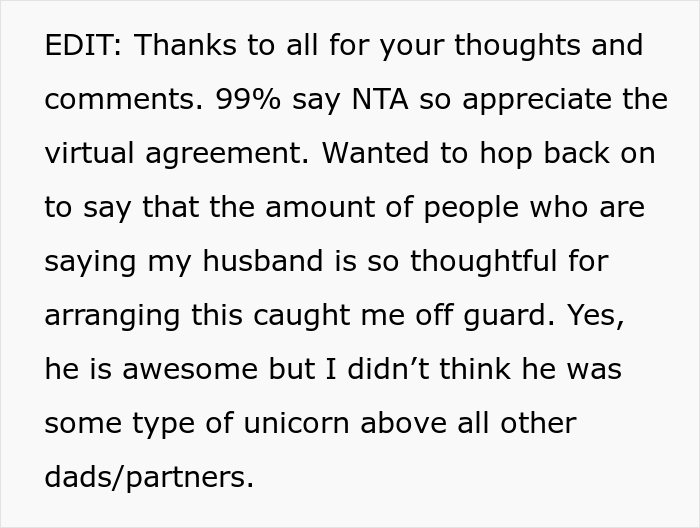 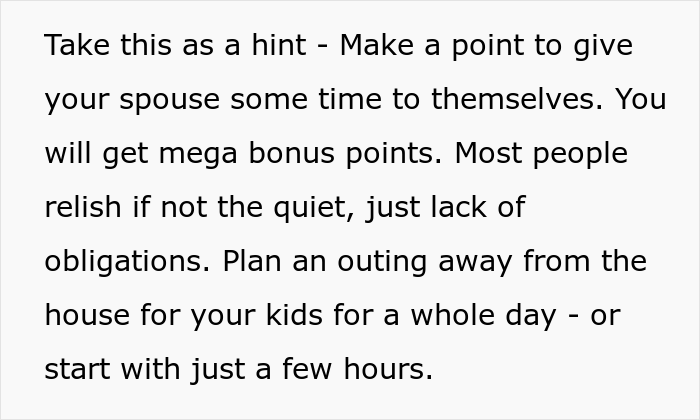 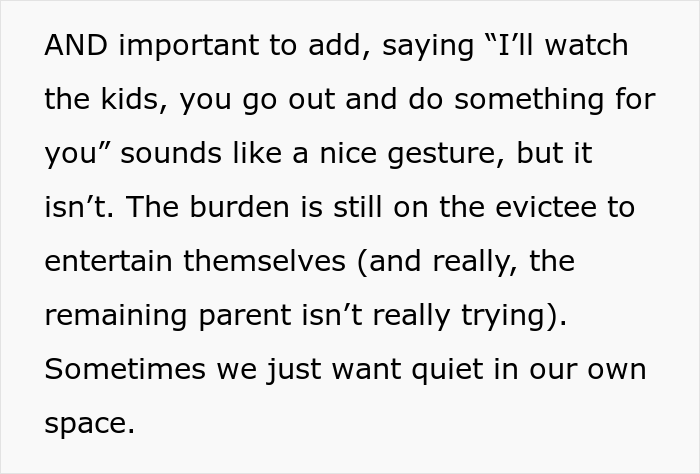 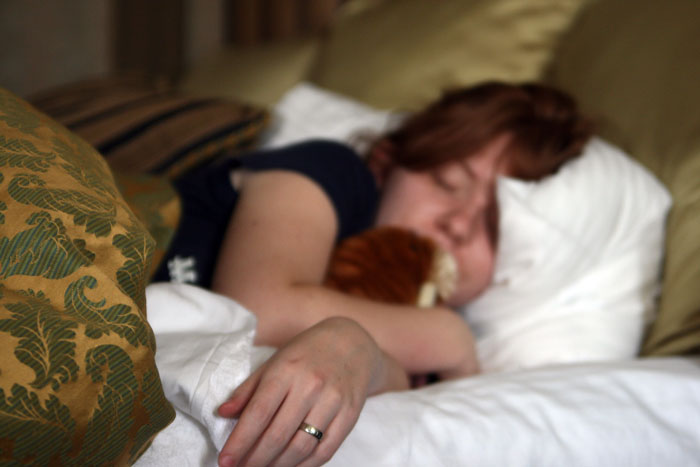 A lot of people also wanted to praise the dad for being so thoughtful and taking the kids out of the house as in many cases, they do want the moms to have time for themselves, but they offer to look after the kids at home, which means the moms have to think of something to do and can’t just lay in bed watching Netflix, which might be the only thing that she wants.

There were also a few comments that didn’t agree with the mom because they have lost their children and would have given everything to be hugged by them early in the morning or they just thought that this day should be spent with the family and the OP could have chosen any other weekend to rest.

We would like to know what your take on this is. Do you agree with the majority of redditors who thought that this was the best gift that someone could give to a mom on Mother’s Day? Or do you reckon that while a mom deserves peace and quiet, it should be organized on some other day? Let us know your thoughts! 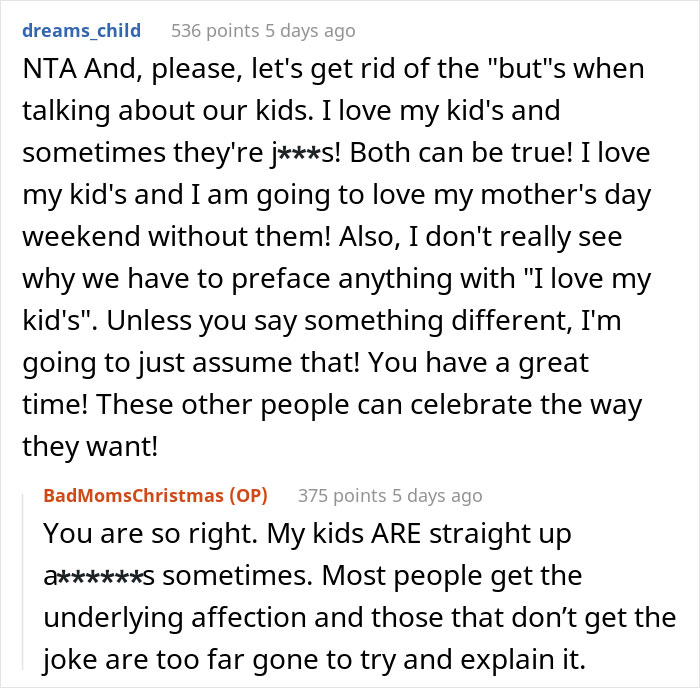 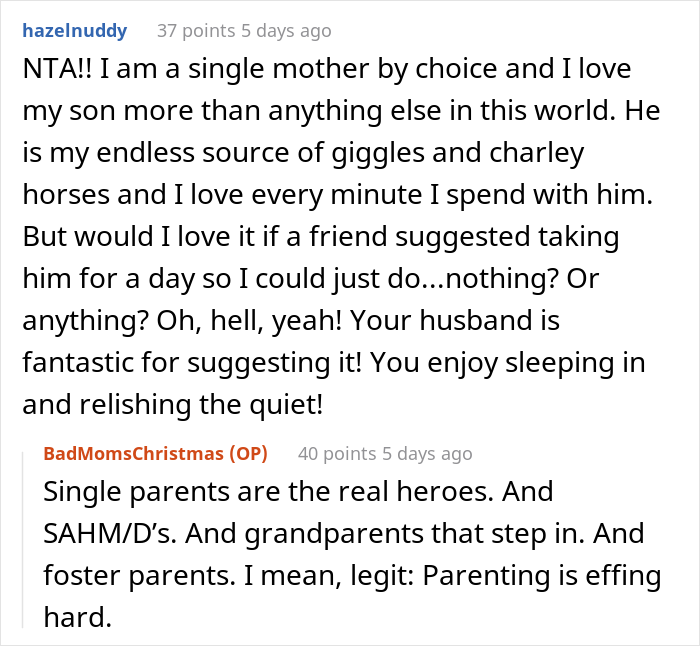 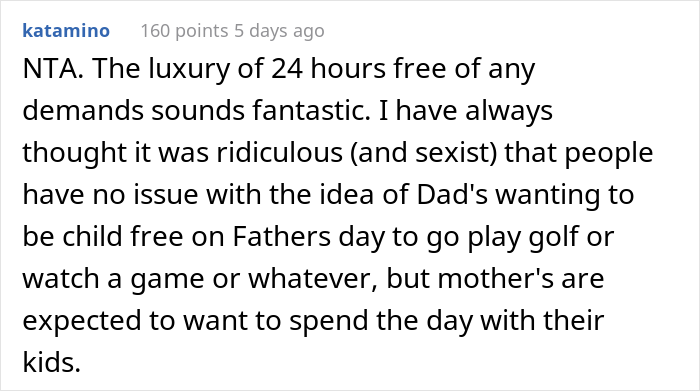 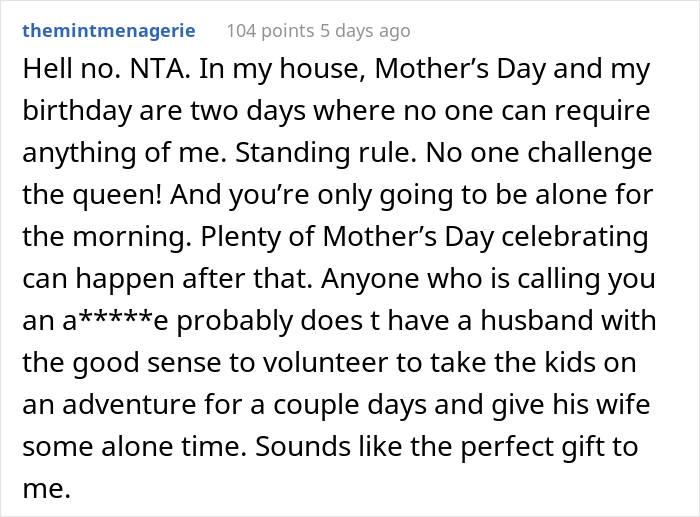 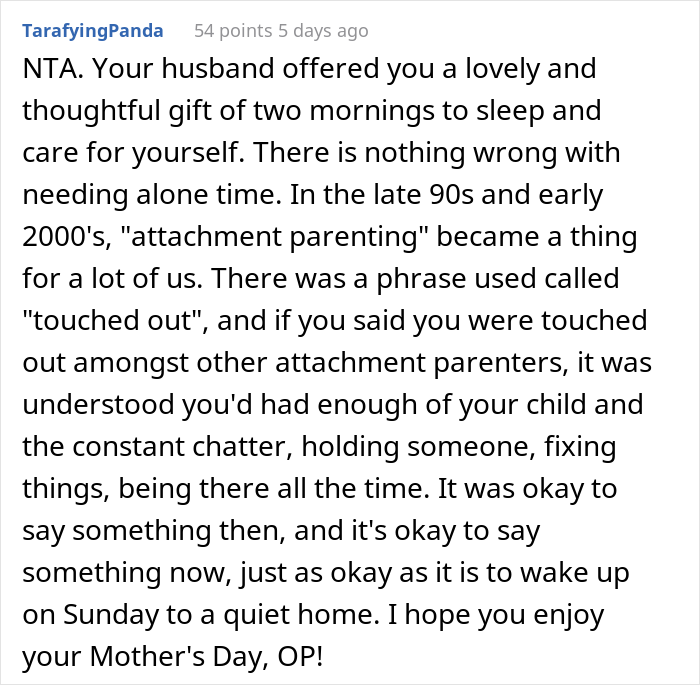 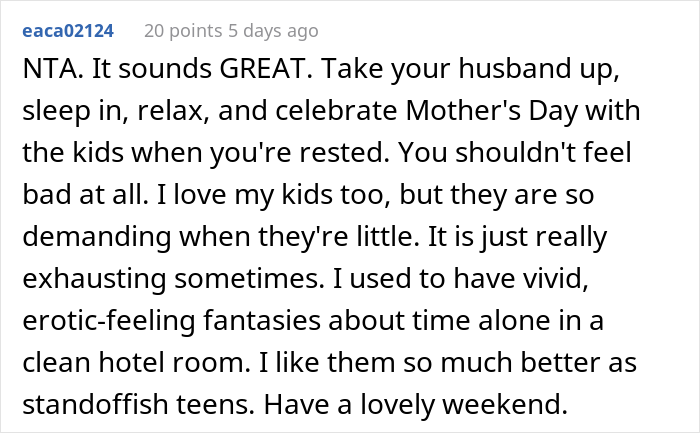 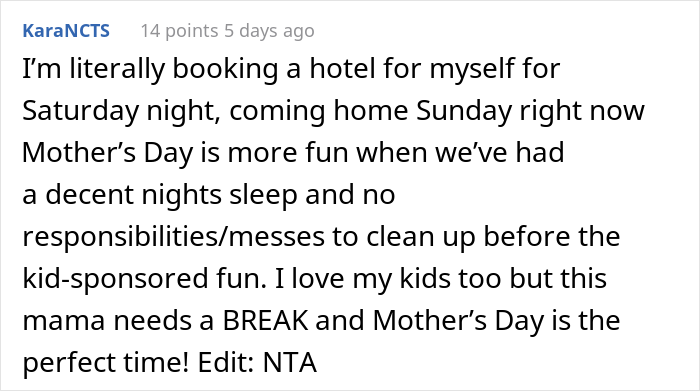 The post “AITA For Wanting To Be Without My Children On Mother’s Day?” first appeared on Bored Panda.