The word “séance” tends to conjure an image of Belle Époque spiritualists: wealthy eccentrics holding hands around a drawing-room table in some drafty old mansion, while a medium possessing the gift—or curse—of paranormal perception converses with the dead through a system of table-knocks. Séances are a key element of sound artist Aki Onda’s recent work, but he doesn’t need a haunted house or a medium to make contact with the world beyond: all he needs is a radio antenna. For his new album, Nam June’s Spirit Was Speaking to Me (Recital, 2020), Onda recorded radio transmissions to produce abstract works of audio collage that, he says, contain the voice of the late South Korean artist Nam June Paik. The resulting four-track LP is compelling as a kind of parapsychological thought experiment, but also stands on its own as a work of richly textured minimalist music. 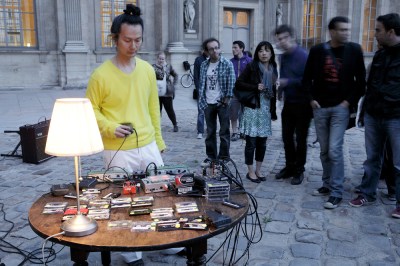 Onda, who was born in Japan and lives in New York, has been experimenting with found sound since the late 1990s. He is perhaps best known for the ongoing project “Cassette Memories” (2004–), a series of performances in which he manipulates the playback of cassette tapes drawn from an archive of field recordings that he calls his “sound diary.” As Onda describes in the album booklet for Nam June’s Spirit Was Speaking to Me, he first made contact with Paik in 2010, after wandering around the Nam June Paik Art Center in Seoul, taking in the institution’s vast collection of Paik’s art and ephemera. That night in his hotel room, scanning the radio dial with a handheld receiver, Onda heard a muffled voice emerge through the storm of signals. He clicked record on the attached tape deck, and the next twenty minutes of raw field recording became the basis of his composition “Seoul (2010),” with little to no subsequent editing. Over the next four years, he held what he called “séances” like this wherever he travelled, ultimately using audio from Cologne, Warsaw, and Lewisburg, Pennsylvania, for the other three album tracks.

Onda’s homage to Paik is twofold, channeling both his disembodied voice and his artistic method. Paik, who died in 2006, said his work with televisions and electronic transmissions was influenced by Korea’s Mudang shamans, who perform rituals with symbolic items like swords and fruits to mediate between the living and the dead. Artists, he suggested, are like shamans in that they open portals between the world of the real and the world of representation, giving form to the ethereal. Paik drew on Mudang shamanism for a 1990 performance in Seoul, A Pas de Loup, in which he summoned Joseph Beuys’s spirit by staging a traditional Korean “kut” rite: drumming, dancing, and singing to an altar full of objects that symbolized the German artist, who had died four years prior. Onda’s invocation of Paik’s spirit echoes this performance, but Onda gives it new life by adapting it to the logic of his found-sound process.

Radio has long had paranormal associations because of its core technological feature: if the signal is strong enough, a receiver can pick up messages from anywhere. In Nam June’s Spirit Was Speaking to Me, Onda plays with these sci-fi and occult connections, suggesting in the album’s liner notes that his recordings might even contain “secret broadcasts” from “anonymous radio stations” built for clandestine research or espionage. He takes this as a kind of meta-premise for the project, expressing the idea of spiritual communion by seeking out chilling, otherworldly sounds generated by who-knows-what coming from who-knows-where. “Köln (2012)” has a particularly wraithlike quality, with sputtering patterns of white noise that suggest encrypted code, while “Seoul (2010)” is so hypnotic that it’s almost gently dissociative, recalling experiments with mood-altering audio. But the most striking thing about these tracks is how little manipulation was involved in their production: apart from the final mastering stage, they are largely unedited recordings of signals pinging around the atmosphere. All Onda did was pluck them from the ether.