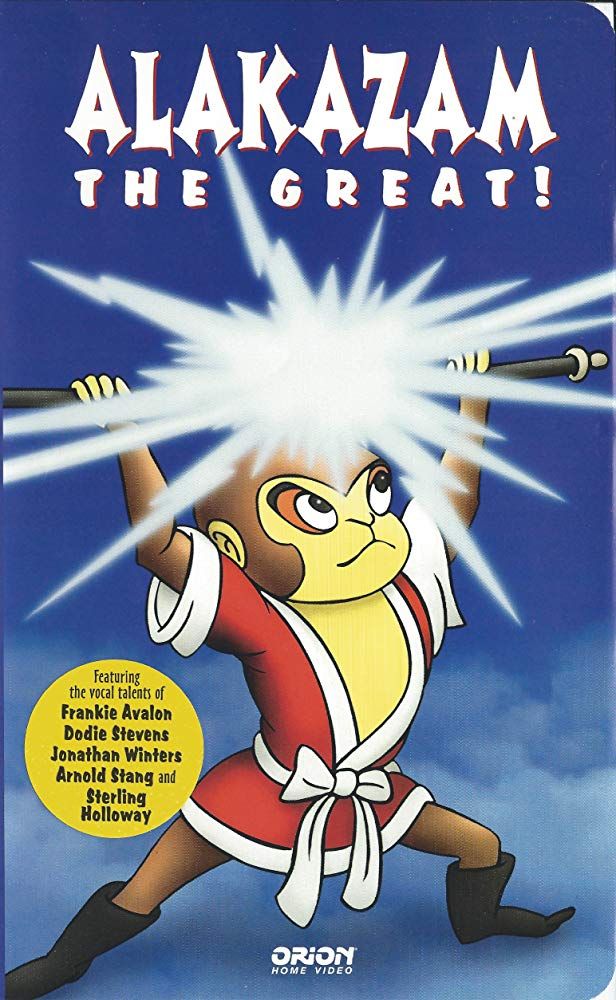 Although today’s entertainment industry is flooded with Japanese anime and manga such as Cowboy Bebop and Spirited Away, it had to start somewhere, and the 1960 film Alakazam the Great was that starting point. Japanese in origin, it featured dubbed English by some familiar names such as Frankie Avalon and Jonathan Winters. I recall seeing this film on TV in the early 1960’s and I found it fascinating, especially the character voiced by Arnold Stang, who could burrow through solid rock with a crescent spade. From the IMDb:

ALAKAZAM THE GREAT is loosely based on the Wu Cheng-En classic JOURNEY TO THE WEST, a landmark of Chinese epic literature, and tells the story of an arrogant monkey king who learns the secrets of magic and becomes a cosmic pain in the ass. After a brief rampage through the heavens, he is imprisoned by the gods and eventually sent on a pilgrimage to atone for his sins and learn humility. The monkey must escort a young prince (who is the son of the gods) through a series of insanely lethal adventures in a land teeming with demons and monsters of every description, picking up a couple of unusual traveling companions along the way (an anthropomorphic pig-man and a burrowing cannibal). Much magic and cartoon ass-whuppin’ ensues, and despite the (mercifully brief) musical numbers, this film has raw imagination to spare. Fast-paced and fun, this is not the dud that some would lead you to believe. Give it a chance!

In other words, typical wildly-imaginitive Japanese anime fare. I haven’t seen this film since about 1964 but recall that it kept my interest then and will probably do so with today’s kids as well, no mean feat in the internet age. YouTube offers the complete film, which is embedded below. Have a look with the family and see what anime was like when Dwight Eisenhower was still President.