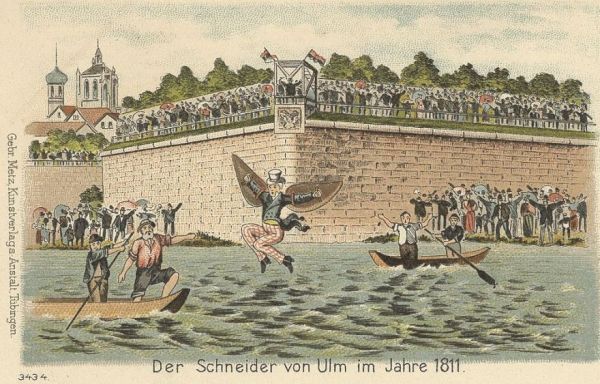 The history of human flight is often presented as if the whole idea only occurred to us in the late 19th century, and then the race was on, which the Wright Brothers won when they flew an airplane on December 17, 1903. But there were pioneers of flight hundreds of years earlier, with some successes like hot air balloons and gliders. Yet there were many more failures.

Albrecht Berblinger was one such pioneer in the early 1800s. A tailor by trade, he devoted all his spare time and money to developing flight. He invented what was essentially a hang glider, which he demonstrated in front of royalty in 1811 on the banks of the Danube River in Ulm, Germany. Berblinger knew something was wrong, and hesitated. But the crowd would not stand for him to back out, and the demonstration was a horrible failure. Berblinger’s reputation was ruined. However, modern engineers say that his flying machine was soundly designed, and should have worked. Read the story of Berblinger’s flight and why it failed at Amusing Planet.