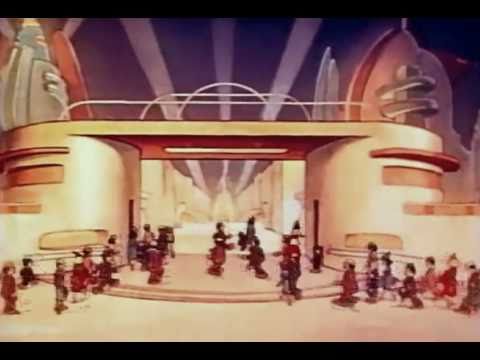 The 1939 World’s Fair in New York was, as a certain politician would say, a big effing deal. World War Two was about to begin, the Great Depression was winding down, technologies were advancing, and people from all over the world did indeed come to the fair. This world’s fair was quite prominent for all of the above reasons, so much so that it became the theme of a Doc Savage novel, a Twilight Zone episode, and in 1938, a Fleischer Studios cartoon. The Fleischer brothers were by 1938 very well known due to their Superman and Popeye cartoons, and they competed with Disney by producing animated films such as Gulliver’s Travels. Here they jumped out in front before another studio could produce a similar feature. From the IMDb:

“All’s Fair at the Fair” is a wonderful example of the sort of cartoons Fleischer Brothers Studio was capable of back in the day. While today they’re mostly known for the incredibly formulaic and predictable Popeye cartoons, they also made a wide variety of other cartoons–and a few of which are real gems…like this film.

The film is about a couple of oldsters who go to the new World’s Fair (exactly WHERE it never says). It’s a completely insane fair–with robots doing all sorts of amazing things, beauty treatments that will take decades off your looks and cars that come out of vending machines. It’s all very silly and quite charming. Most importantly, it holds up very well today and shows the sort of high hopes folks had back then when it came to the fairs. Well worth seeing and available for free download at archive.org.

This cartoon was made over 80 years ago now, but the technologies portrayed therein are quite prescient. A pleasant watch and one the kids will enjoy.