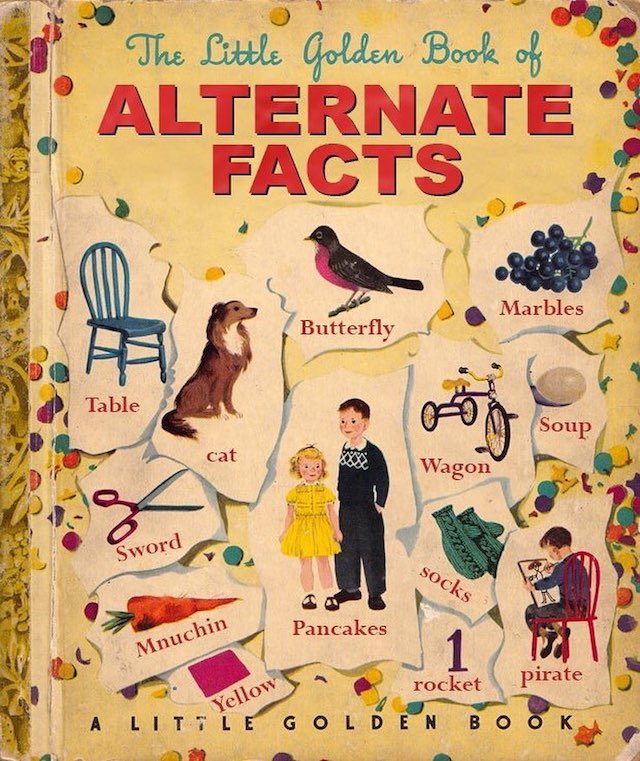 On Sunday, Trump senior adviser Kellyanne Conway introduced the nation to the idea of “alternate facts.” This charming sleight of hand, which caused a stir when Conway defended first-day press secretary Sean Spicer’s claim that the inauguration was the “most watched ever,” is basically a rebranding around the definition of lying. Rather appropriately, it gets the visual adaptation it deserves with a colorful children’s book cover for an imaginary work titled The Little Golden Book of Alternate Facts.

Created by illustrator Tim O’Brien, the cover is a nod to the popular Little Golden Books series, beloved and bemoaned by children everywhere throughout much of the 20th century. O’Brien’s work features cleverly sampled and photoshopped illustrations of objects, animals, and children described using completely unrelated nouns. So, a couple of kids become “pancakes,” a chair becomes a “table,” the number 1 becomes a “rocket,” and so on.

O’Brien’s Little Golden Book of Alternate Facts is a bit like Yorgos Lanthimos’ dark absurdist satire, Dogtooth, in which a father keeps his three kids at home by redefining reality. A leather chair is the the “sea,” a highway, “a very strong wind.”

Can a Cat Be Abstract Art? This Illustrator Digs Her Claws In

This Artist Captured Donald Trump in a Compromising Position