One of the most important lessons we learn at a young age is that actions have consequences. And when it comes to teen discipline, every family handles the “punishment must fit the crime” scenario differently. Some parents jump blindly to revoke their cell privileges or screen time; others need an extra nudge to follow through. But sometimes, the child’s mistake is so costly, and the discipline techniques seem so harsh, it’s bound to stir up drama in the household.

As Redditor aitavetcost recently detailed in her AITA confession, she found herself in precisely such a predicament after her daughter, Janie, made a dire mistake involving their dog. “2 weeks ago in the worst of the heat wave, Pebble was crying at the deck door,” the conflicted mom-of-three wrote. “Janie got annoyed and let him go on the deck.”

What followed led close to a $2,000 bill for vet expenses, trials and tribulations in sibling relationships, and some heated remarks from an angry teen directed right at her parents. The story caused quite a stir on the platform where people jumped at the chance to deem a verdict. So continue scrolling to read the full story and the reactions that followed. Then be sure to decide where you land on the matter and share your thoughts in the comments below.

This mother recently shared how she forced her daughter to pay nearly $2,000 for vet expenses as a result of her mistake 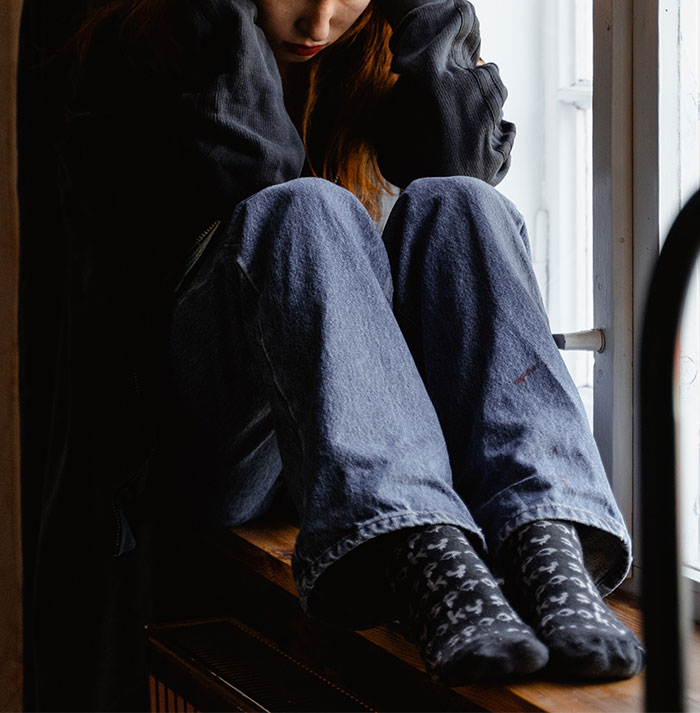 Unsure of what to think of the teen’s reaction, the woman decided to ask for advice and sparked a heated debate online 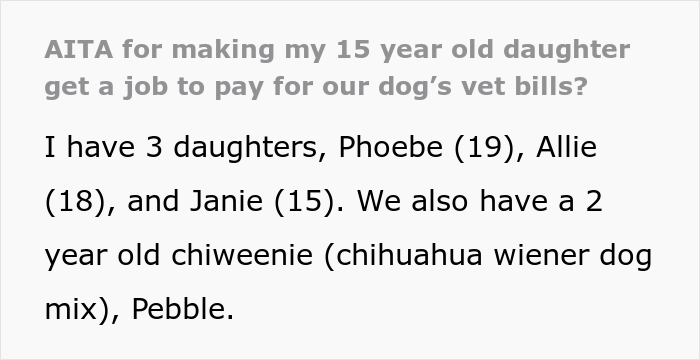 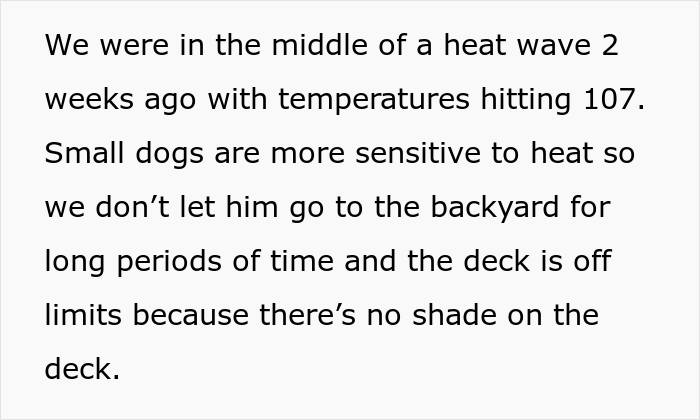 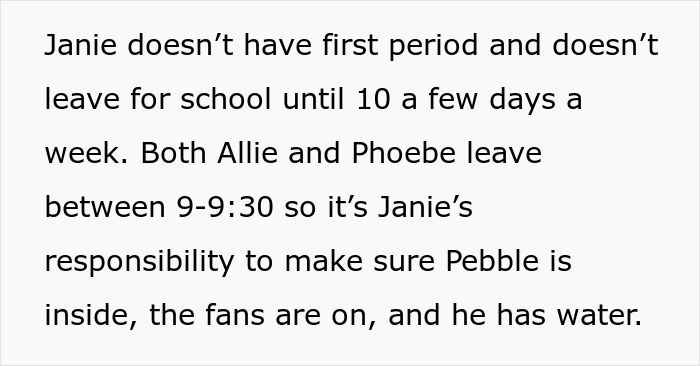 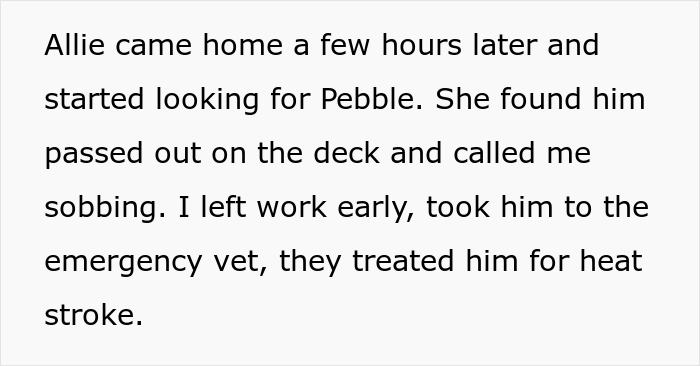 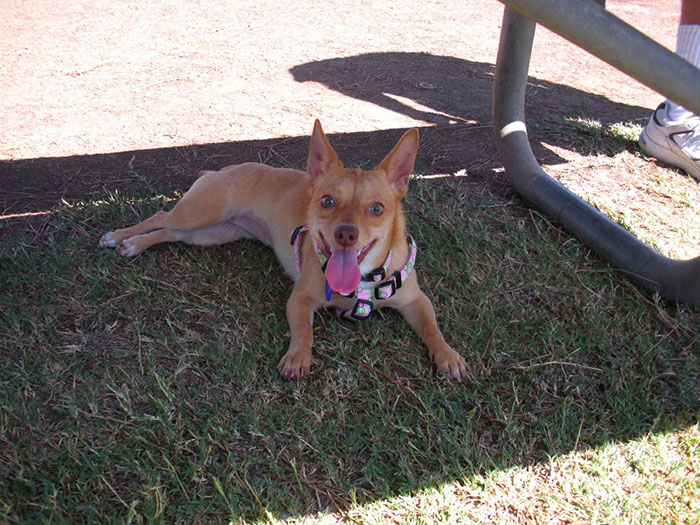 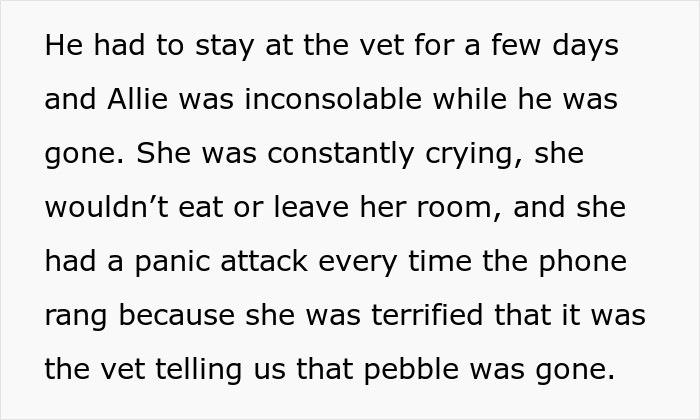 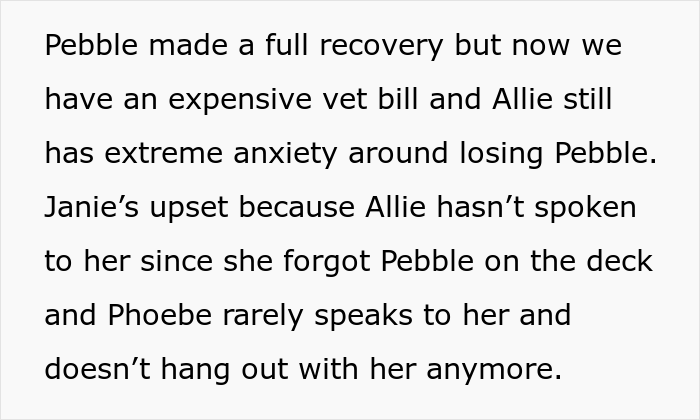 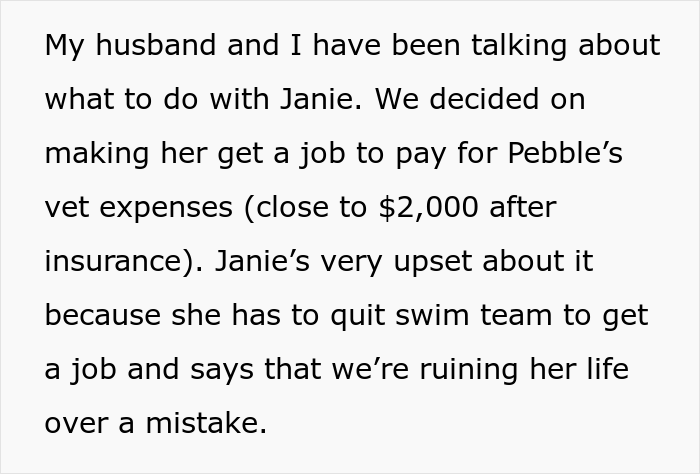 People make mistakes, and Janie is no exception. While most parents would have given the daughter a few extra chores and a lengthy conversation about the importance of caring for your pet, the parents thought this wasn’t enough.

After reading the story, many readers agreed that the couple did the right thing by making Janie feel the consequences of her actions. But the post also amassed quite a mix of different reactions. Some people expressed that both parties are at fault here, and the fact that she’s already feeling the guilt from her sisters makes it a valuable lesson. Other people weighed in on the discussions saying that the parents are being too harsh, and some even offered their own takes on what disciplinary measures would have worked better in this scenario.

The comments on this post might be so divided because of the discipline vs. punishment debate that often stands at the center when parents discuss their parenting methods. After all, moms and dads are responsible for teaching us countless things and ensuring we grow and develop in healthy ways. And while every parent has the right to raise their kids in their own way, some strategies don’t work as well as many believe they do.

If you have trouble thinking of the consequences to your teen’s misbehavior, you’re not alone. Many parents face difficulties devising the right course of action to teach their kids to make better choices the next time. But whether it’s grounding them or suspending video game privileges for weeks on end, these efforts are often to no avail. This is because you can’t simply punish kids into acceptable behavior. You should rather think of an effective consequence that would make your kid think about their actions and encourage them to change their ways.

According to Amy Morin, LCSW, punishment focuses on making a child suffer for breaking the rules — and forcing them to “pay” for their mistakes. “Punishment is about controlling a child, rather than teaching the child how to control himself. And most often, punishment changes the way a child thinks about himself,” she explained.

The problem with punishments is that instead of children believing they made an error in judgment, they may start to think they’re bad people. Enforcing penalties might help you feel like you have a sense of control, but research shows that it’s an ineffective tool for changing behavior and can also hurt your relationship with your kid. As Alan E. Kazdin, Ph.D., ABPP, explained, punishment does not lead to positive behaviors that parents wish: “Developing behavior does not come from merely suppressing unwanted behaviors.”

Moreover, punishing your child has negative side effects, such as “trying to escape from or avoid the situation or person associated with punishment, emotional effects (e.g., crying, being upset), and engaging in aggressive behavior.”

Later on, the user joined the discussion in the comments to clarify a few details about the situation 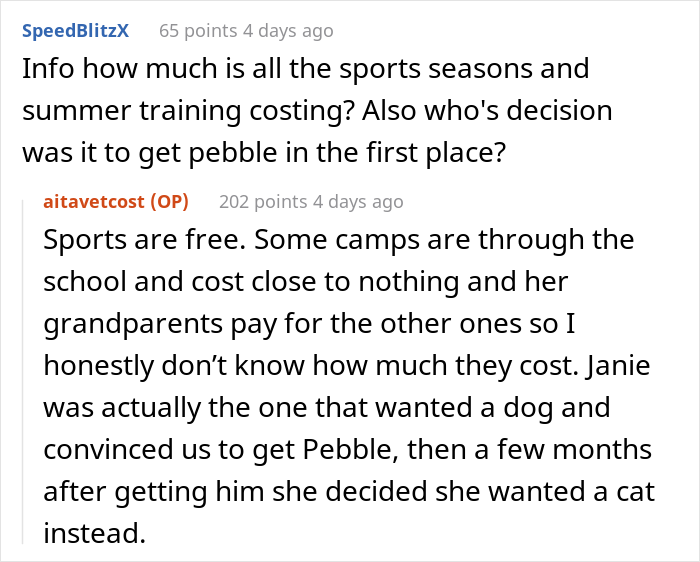 Discipline, on the other hand, teaches children how to manage their behavior, solve problems, learn from their mistakes and avoid making them in the future. “Discipline is proactive, rather than reactive,” Morin noted. “It prevents many behavior problems and it ensures kids are actively learning from their mistakes.”

“Discipline also fosters positive relationships between parents and kids. And quite often, that positive relationship reduces attention-seeking behavior and motivates kids to behave,” Morin added. “While discipline allows for appropriate amounts of guilt, it isn’t about shaming kids. And that is crucial. A child who feels good about himself is less likely to make poor choices. Instead, he’ll have confidence in his ability to manage his behavior.”

Using consequences effectively can make a huge difference in your parenting, your children’s behavior, and the bond you create with each other. But discipline can take different shapes and sizes, and deciding on the most effective tools is a never-ending journey for most parents.

Bored Panda is curious to hear your thoughts about the matter in the comments below. What do you think about the story? Are the parents doing the right thing, or are they in the wrong in this situation? Feel free to share your opinions, personal experiences, and any suggestions on how you would handle this scenario in the comments below, we’d love to hear them!

Readers were divided after reading the story, with some people siding with the parents 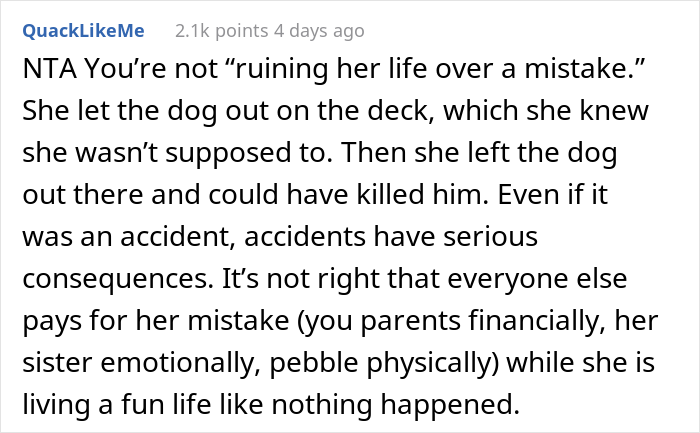 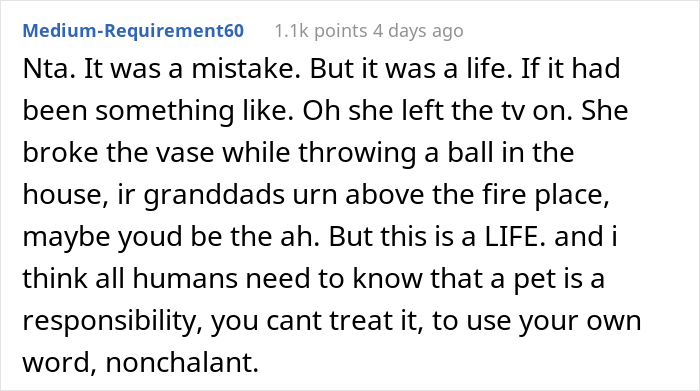 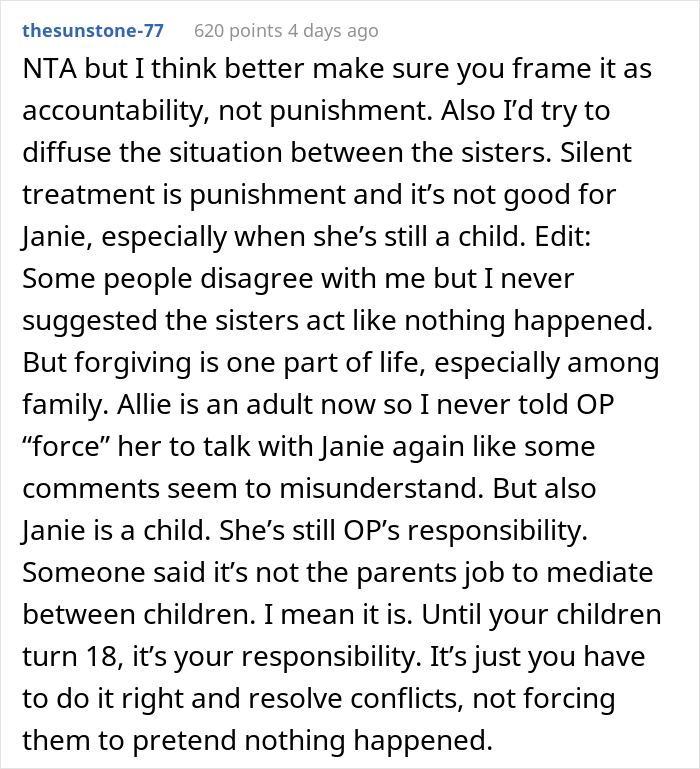 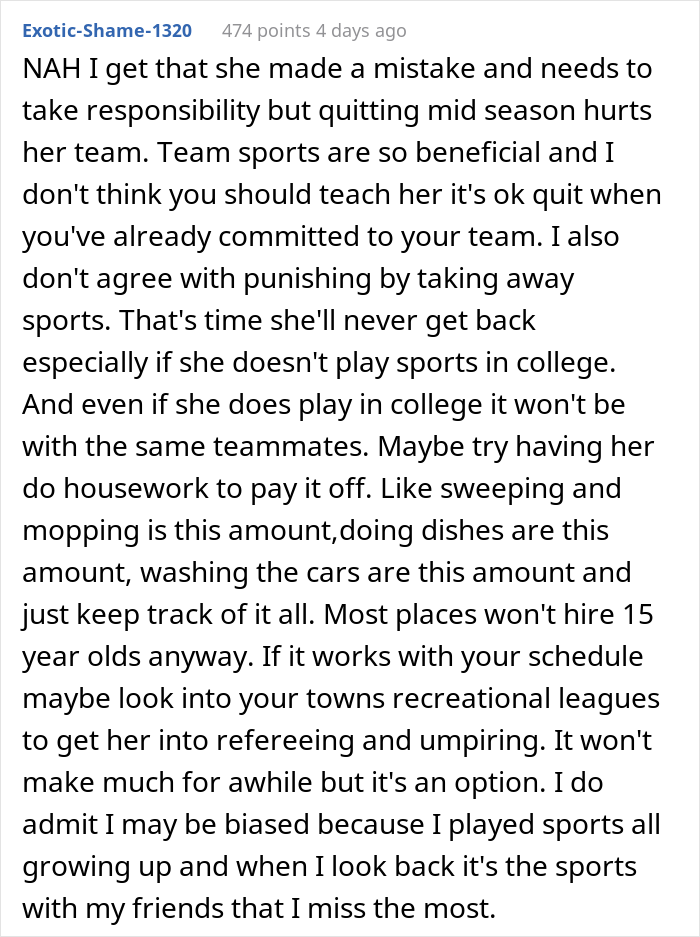 A few others were on the fence, saying that both parties were at fault 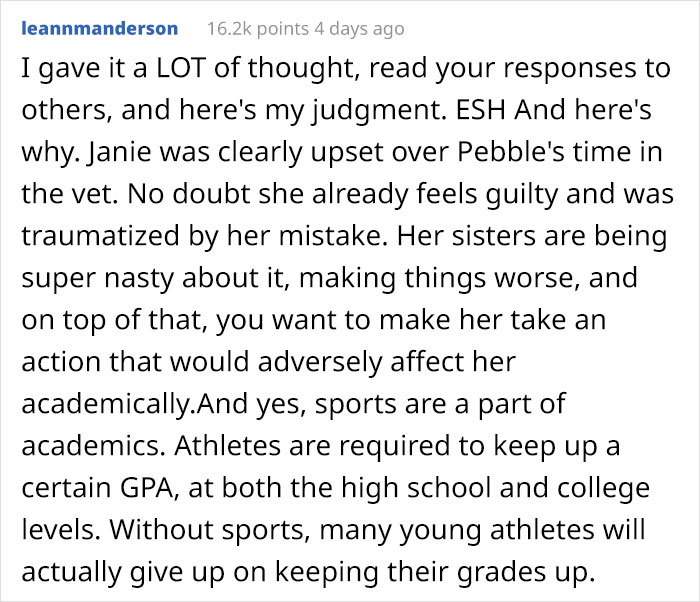 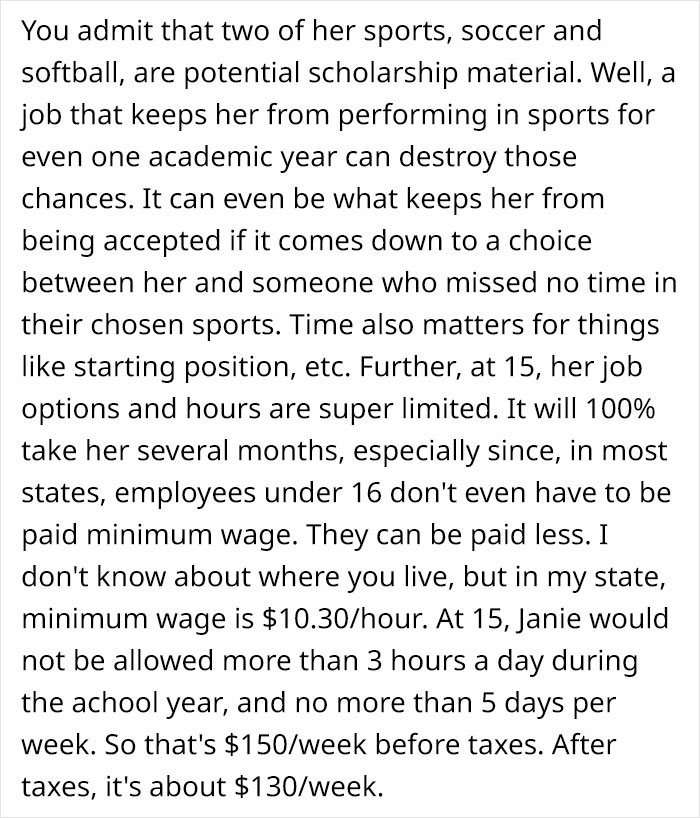 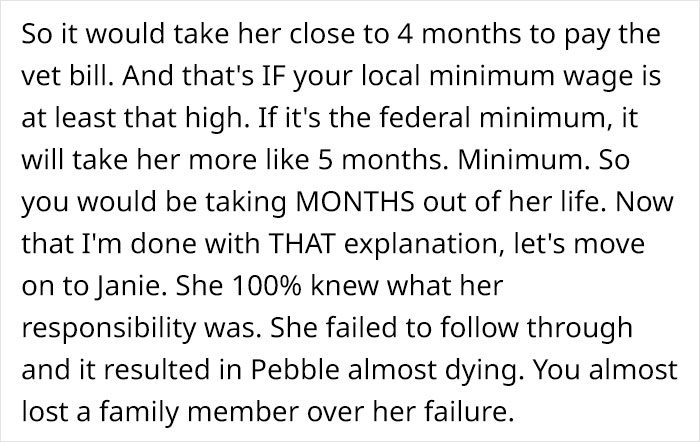 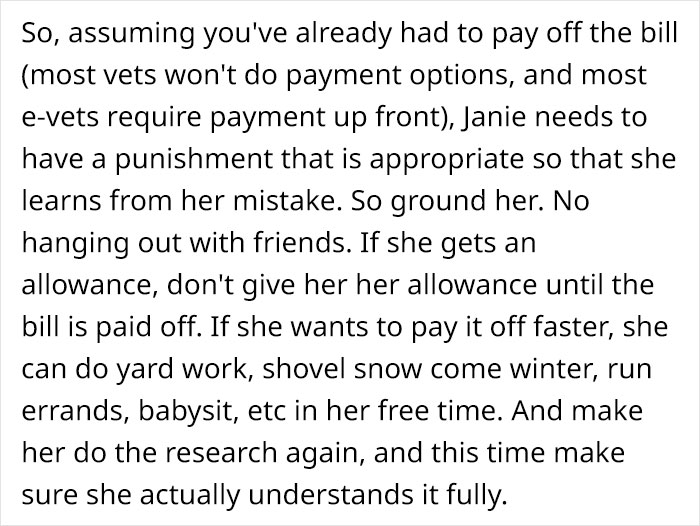 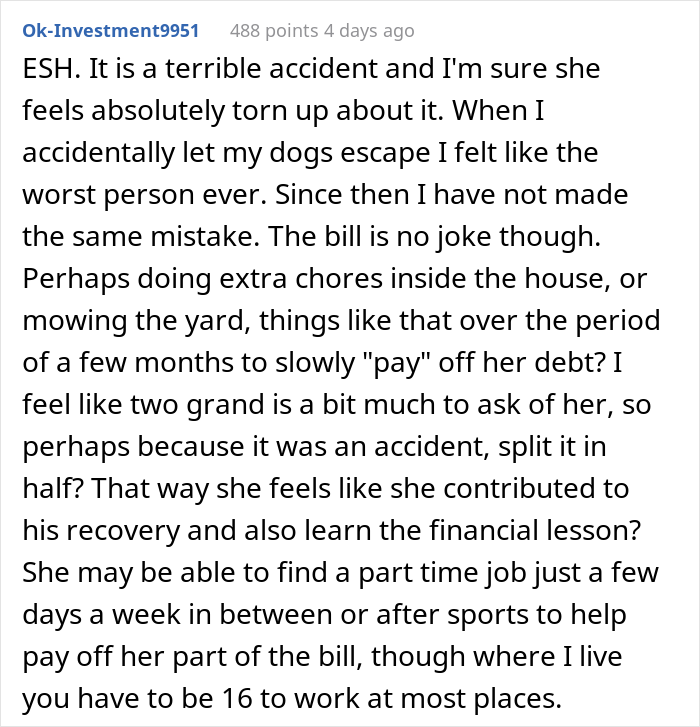 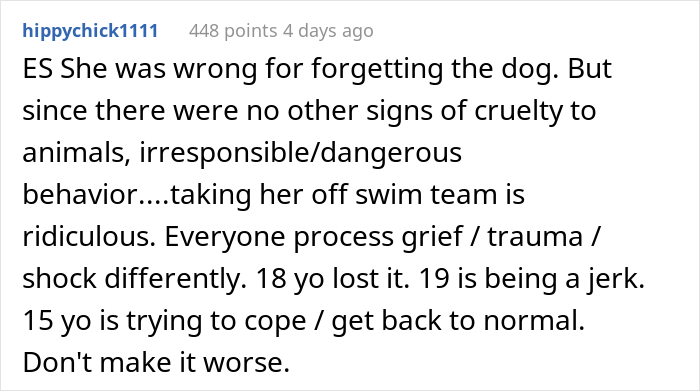 While others found the punishment to be absurd, saying the parents are in the wrong here 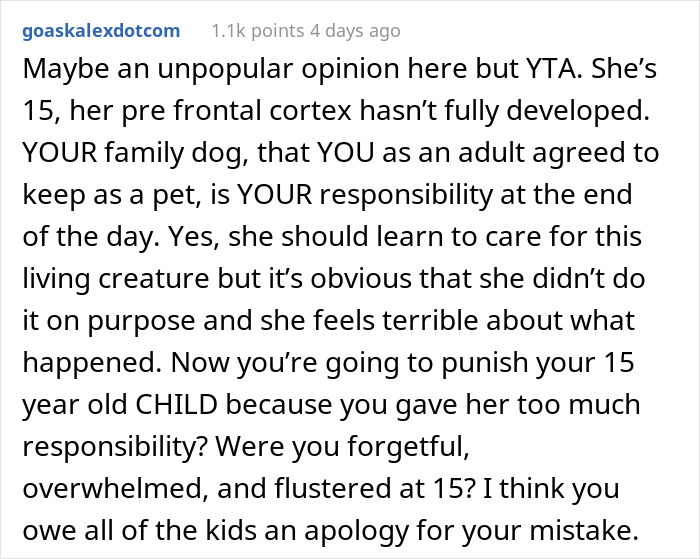 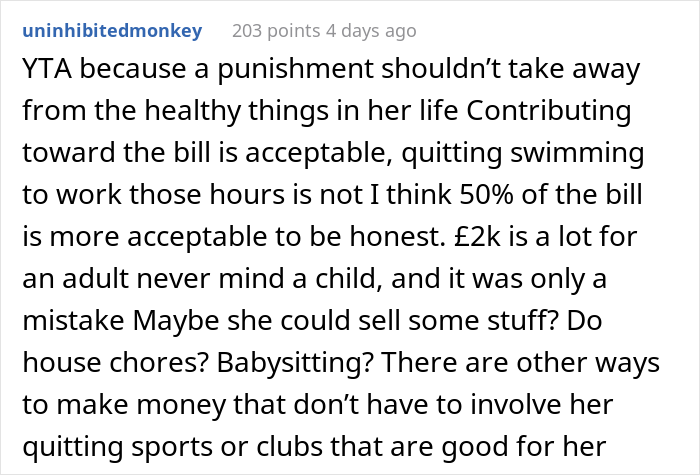 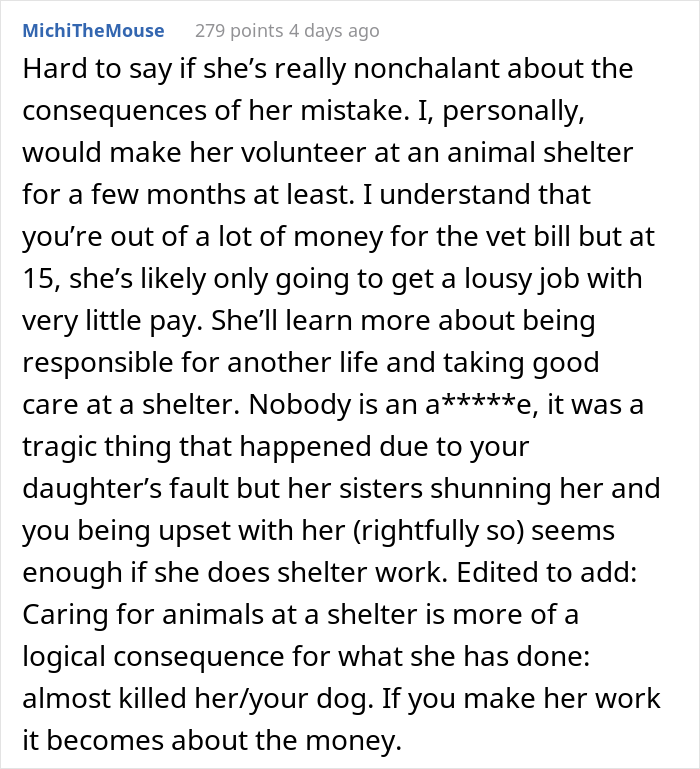 The post “Am I A Jerk For Making My 15-Year-Old Daughter Get A Job To Pay For Our Dog’s Vet Bills?” first appeared on Bored Panda.