When your friends, colleagues, and the people you generally like in this whacky world send you an invite to their wedding, the polite thing to do is to follow the rules that they set. They might have a certain vision of how their guests dress, what gifts they bring, or… they might want a child-free wedding.

Whatever your personal feelings about this, just remember, it’s supposed to be the couple’s happiest day ever. And as guests, dear Pandas, we should do our best to accommodate reasonable requests.

Well, one bride saw firsthand what happens when some people don’t follow the rules. She turned to the AITA subreddit for their verdict on whether or not she was a jerk for billing three couples because they brought their kids to her wedding when she explicitly asked everyone not to. She also went into detail about the chaos that unfolded, spearheaded by the rowdy munchkins. Scroll down for the full story.

Kids might be awesome, but some folks choose to have child-free weddings for a variety of reasons 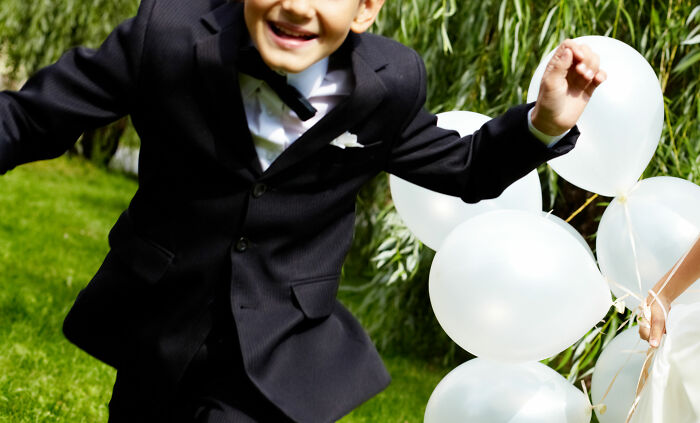 However, when some guests don’t follow this rule, things can get very chaotic, as one bride explained on the AITA subreddit 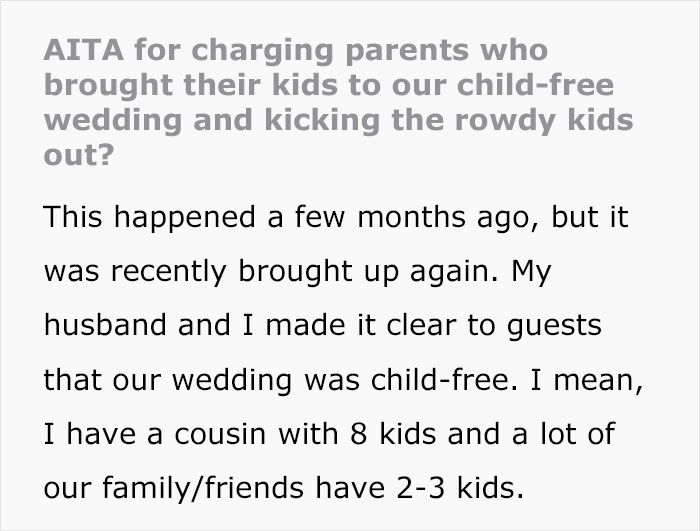 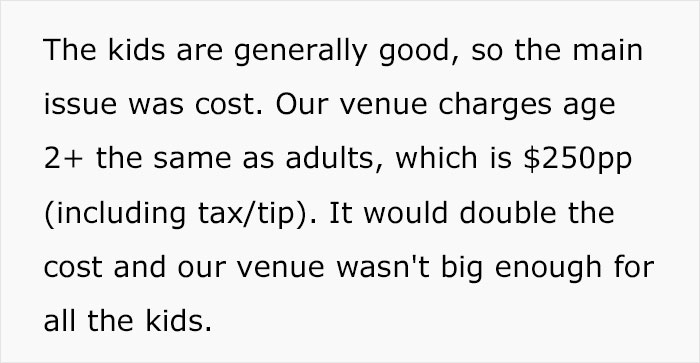 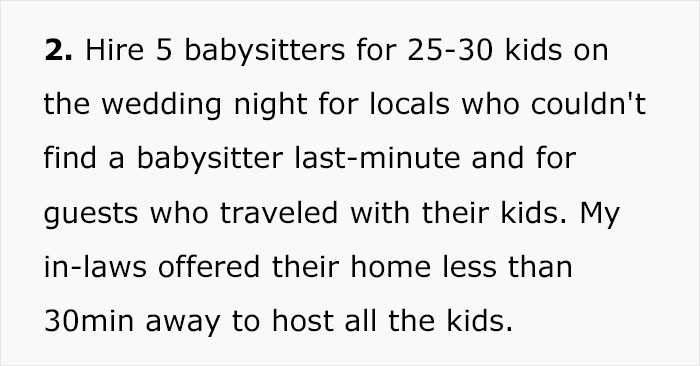 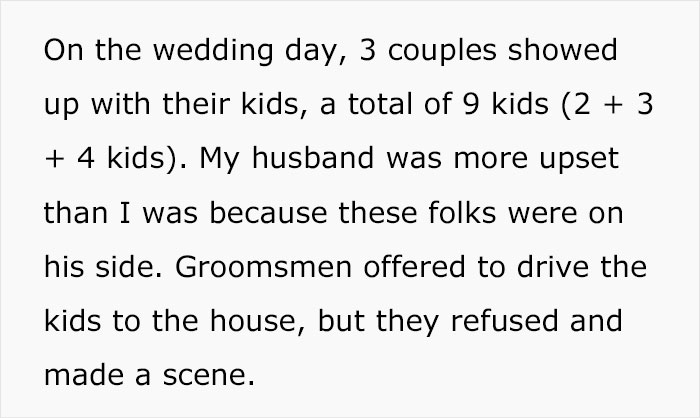 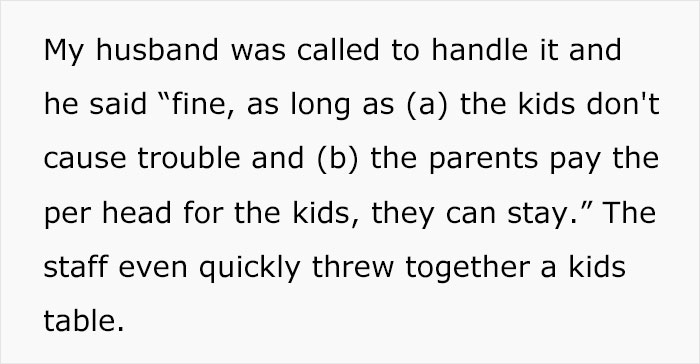 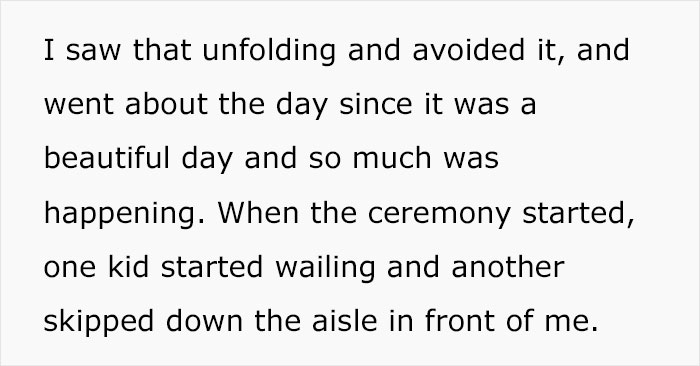 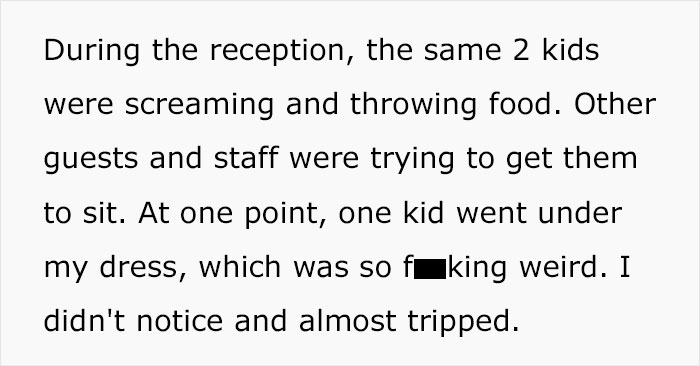 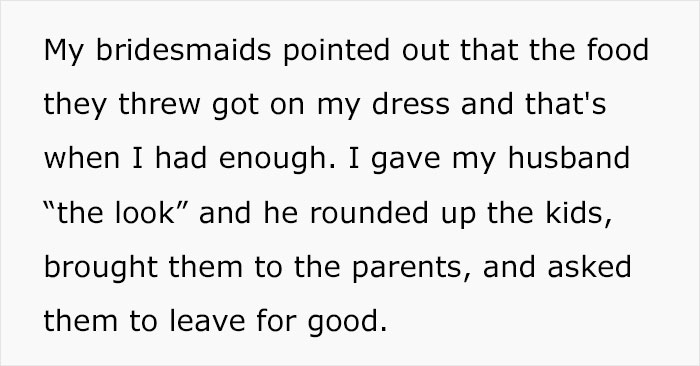 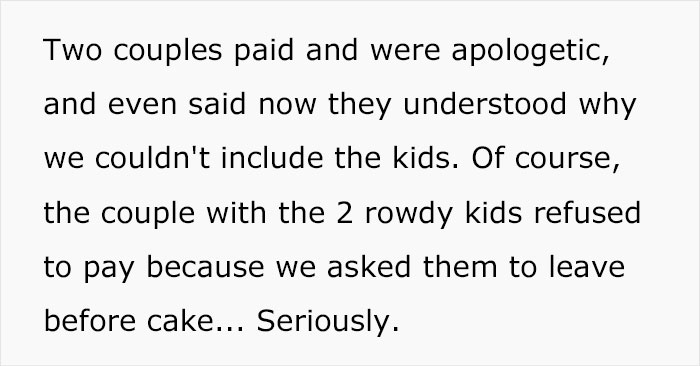 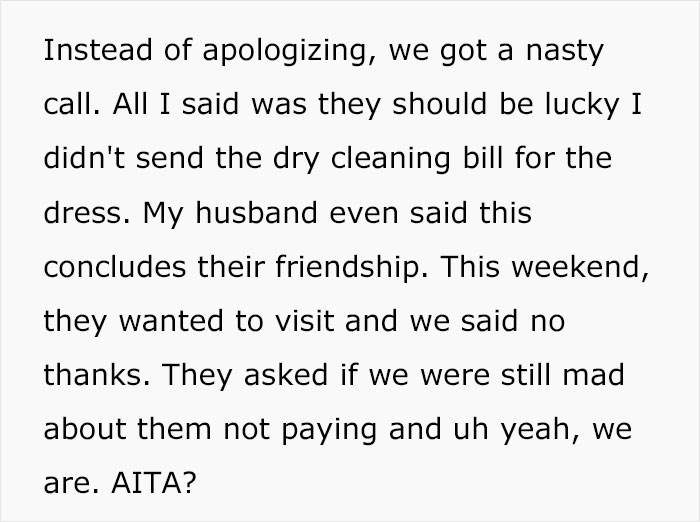 The bride, redditor u/AltruisticHapa, explained that two of the couples were very apologetic and paid for their kids who were additional guests. One couple, however, refused. They felt very entitled and thought that they did nothing wrong. Even though their kids caused the most damage. Including having ruined the bride’s dress.

As the redditor put it, she and her husband concluded their friendship with that particular couple. And that was that. However, the bride was worried that she might have overreacted. Especially when she’d asked her husband to kick out the guests who had brought their children with them.

The AITA community was very sympathetic, however. They stressed that she had gone above and beyond to accommodate those guests who actually had children. She had extended the dinner before the wedding to include all the kids. She also hired 5 whole babysitters to take care of the munchkins while their parents went to the ceremony.

But what do you think, dear Pandas? Whose side are you on? How would you have solved the entire child-free drama? Let us know in the comments.

Anna and Sarah, team leaders at The Wedding Society, spoke to Bored Panda before about how it is important to respect the wishes of the marrying couple when it comes to children at the wedding. “Whether it be that kids of a certain age are welcome, only specific children of a few family and friends, or no kids at all.”

“Please don’t take the inclusion or exclusion of your little ones personally (especially if the couple don’t have kids of their own to fully understand your situation) and remember—as nice as it is to bring your babes along to the celebration, it’s also an awesome opportunity for a fun night off if you’re asked to leave them with a sitter!” they urged guests to look at the positives.

“For marrying couples, the etiquette can be trickier. Newborns really need to be with their parents so please don’t ask for any babies under a few months to be left at home. It’s perfectly reasonable to ask for parents of older children to take the night off and leave them with a sitter, but the fairest way to do this is to make a blanket rule for everyone rather than picking and choosing which kids can come and who can’t.” 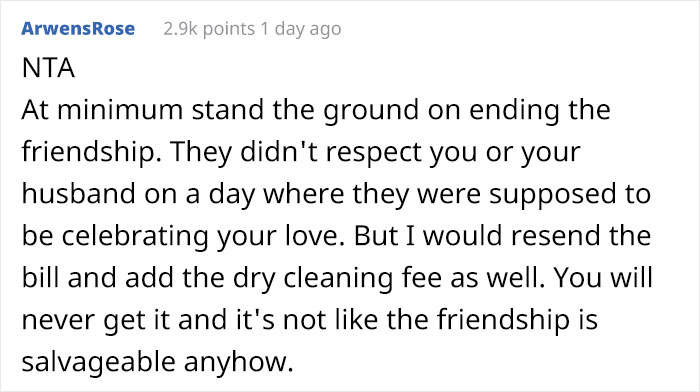 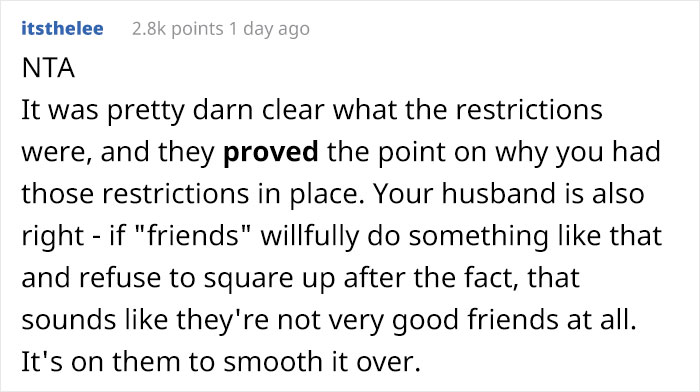 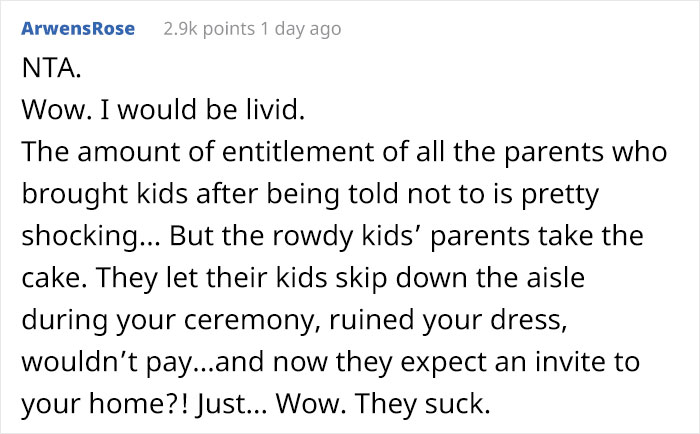 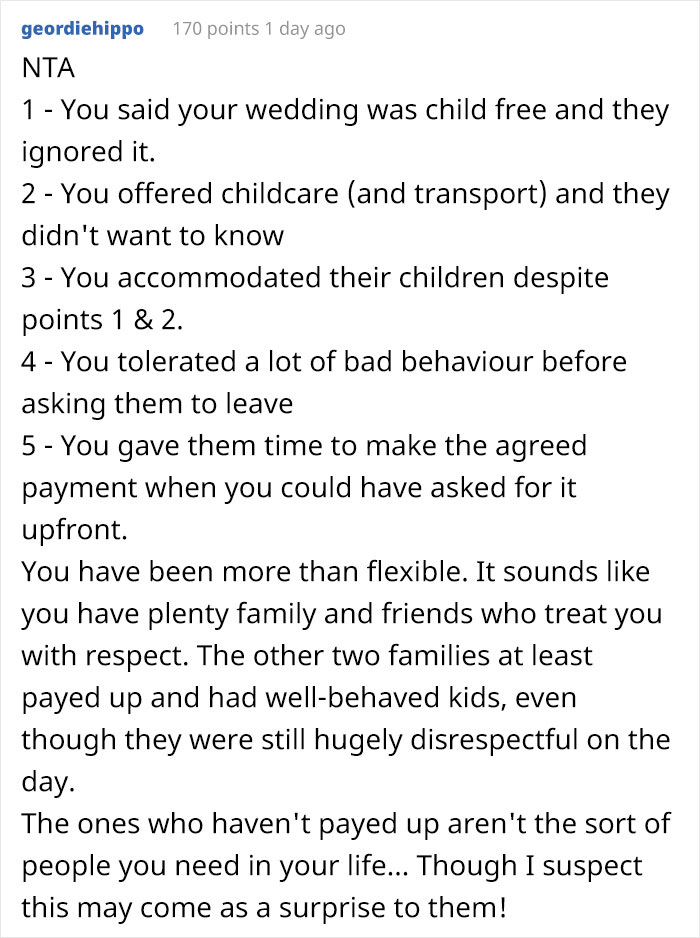 However, some people took it further and said that she was wrong for compromising at all

The post “Am I The Jerk For Charging Parents Who Brought Their Kids To Our Child-Free Wedding And Kicking The Rowdy Kids Out?” first appeared on Bored Panda.