Fighting over money can bring out the very worst in some people, whether they’re distant acquaintances or your closest relations. And things can get incredibly heated when there’s a golden jackpot full of millions up for grabs.

A recent lottery winner, who hit it big and got a whopping 5.6 million dollars in October, shared what happened to him. He turned to the AITA subreddit for their verdict on whether or not he was a jerk because he decided not to give his family any of the money.

Instead, he decided to do the smart thing. The fallout in his social circle, however, was pretty big. You’ll find the full story below, Pandas. Let us know whose side you’re on. And if you’ve ever won the lottery, let us know in the comments whether it changed you, because research shows that people tend to stay the same even after getting millions. 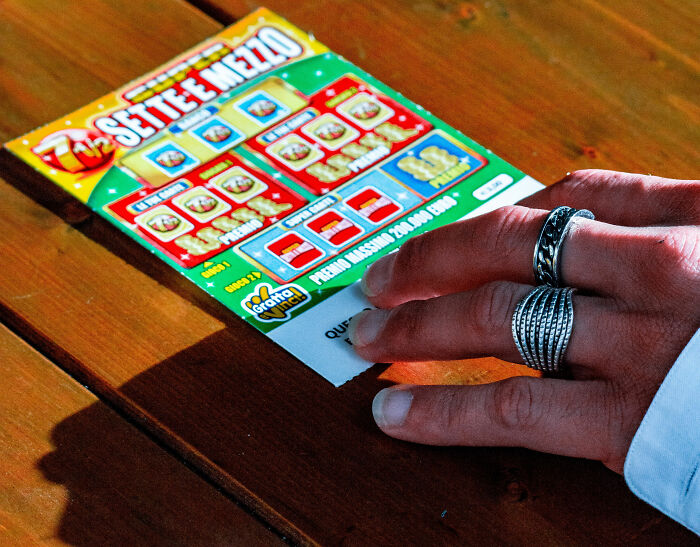 Well, one man explained what he did with his 5.6-million-dollar jackpot and how his family reacted to his decisions 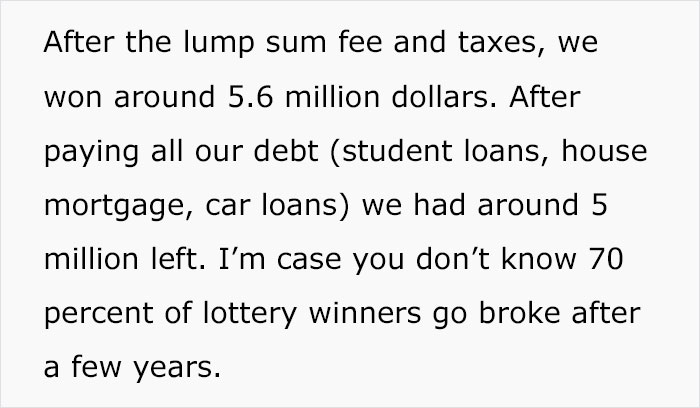 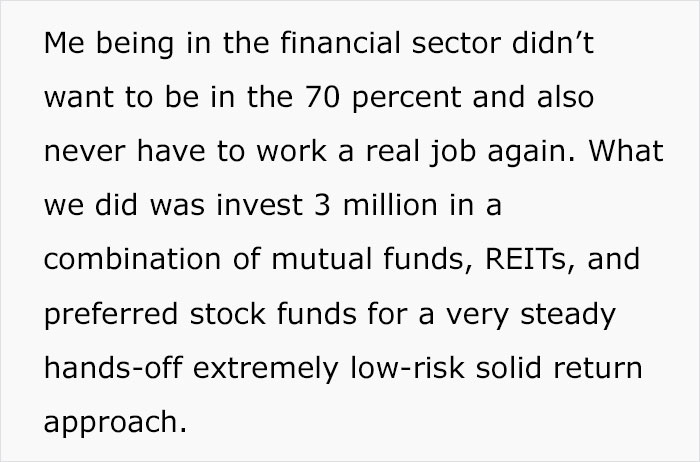 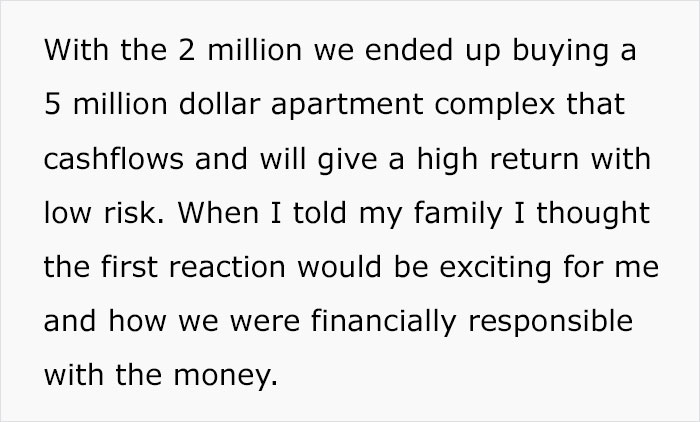 Psychology Today notes how Bengt Larsson discovered that lottery winners tend to remain the same. The only thing that changes is that they generally consume a lot more. The myth that winners become someone entirely different is pretty much that—just a myth.

The redditor’s main concern was that he would fall into the same trap that a lot of winners do: spending all of the winnings within just a few short years. Instead, the author of the post explained how he decided to take care of his and his wife’s future by investing the money and paying off all their debt.

However, this meant that he wouldn’t be able to give his family any of the cash. Some of you Pandas might be surprised to learn that they didn’t take it well when they heard that they wouldn’t be getting a cent. They expected that this sudden financial blessing would mean that someone pays off all of their debts without them having to lift a finger. And imagine all the luxurious family trips they’d all take!

The family quickly turned on the redditor after he explained what he did with the money. They ostracized him pretty quickly, telling him to never speak to them again. Apparently, if you don’t spend all of your money on someone, you’re automatically branded as someone who is no longer a part of the family. Entitled much? You bet.

Financial adviser Robert Pagliarini explained to Business Insider that the very first thing a lottery winner should do after confirming the jackpot is all theirs is to take “a very deep breath,” and then hire an attorney, a tax specialist, and a financial adviser.

“This financial dream team can help you make smart financial decisions and help you plan for the future,” the expert said.

Pagliarini warned that many lottery winners experience the so-called “honeymoon stage of sudden wealth.” Quite a few allow the prize money to dictate how their lives change, but winners should do their best to resist this. This means actively planning out how you’d like your life to look. For that, you need a clear strategy on how you’ll use the money to achieve your goals. In other words, you need to be the one in control of the pot of gold, not the other way around. Exactly what the redditor who asked the internet for advice did.

Most people were very supportive of the redditor. Here’s what they had to say about the entire family drama 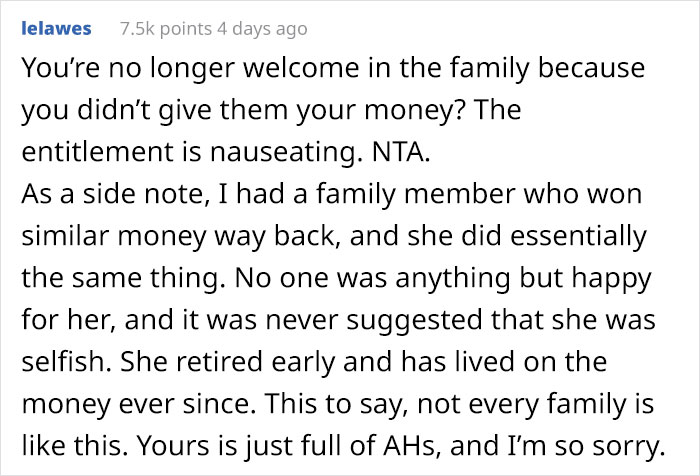 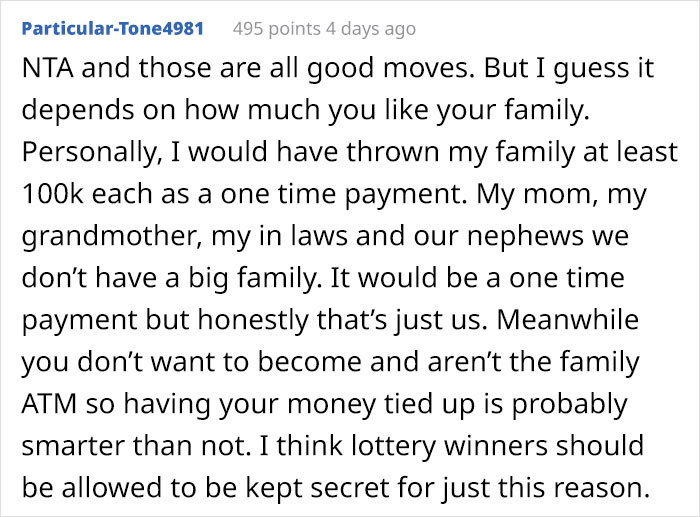 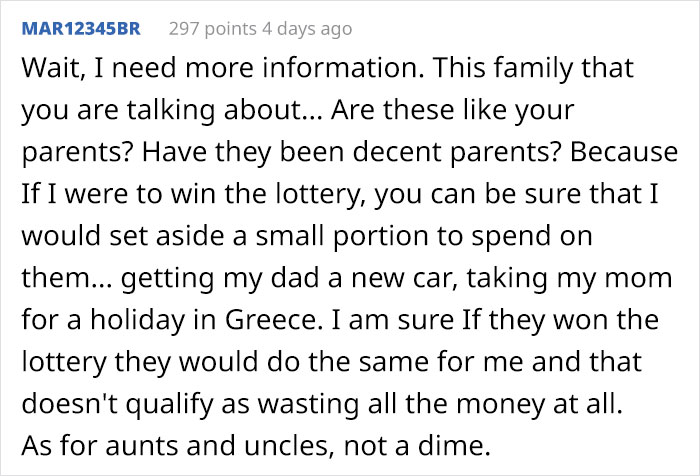 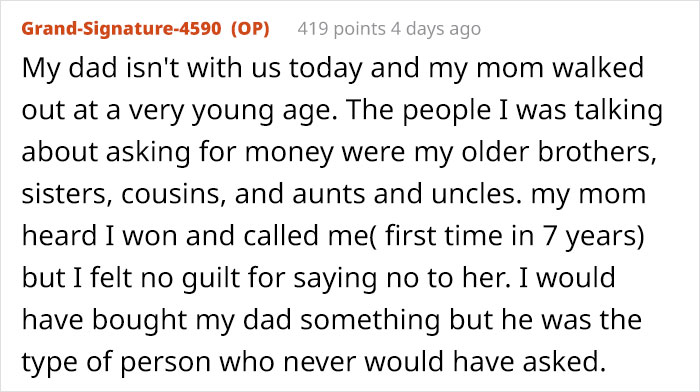 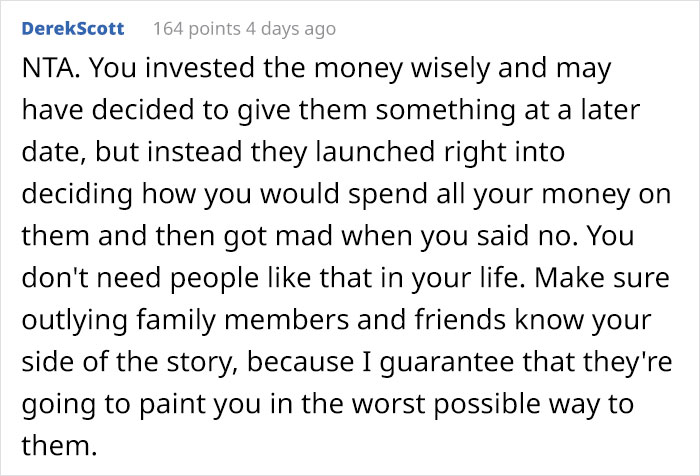 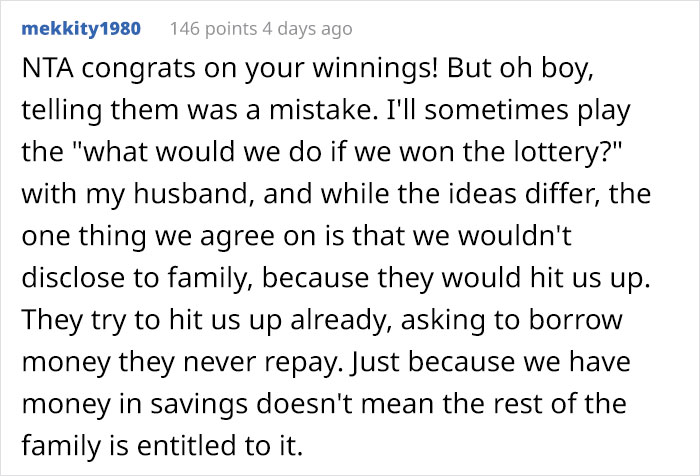 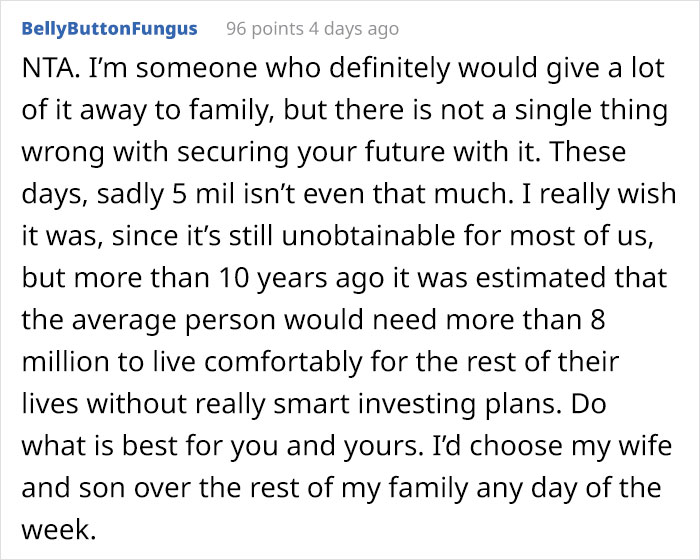 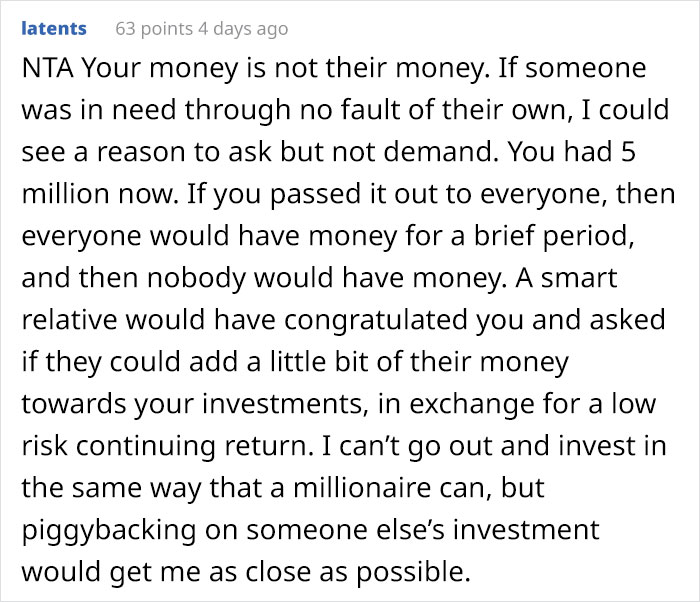 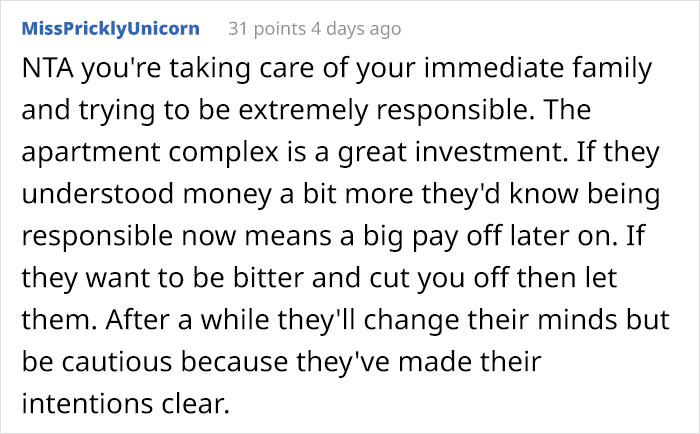 The post “Am I Wrong For Not Giving My Family Any Of My Lottery Winnings?” first appeared on Bored Panda.