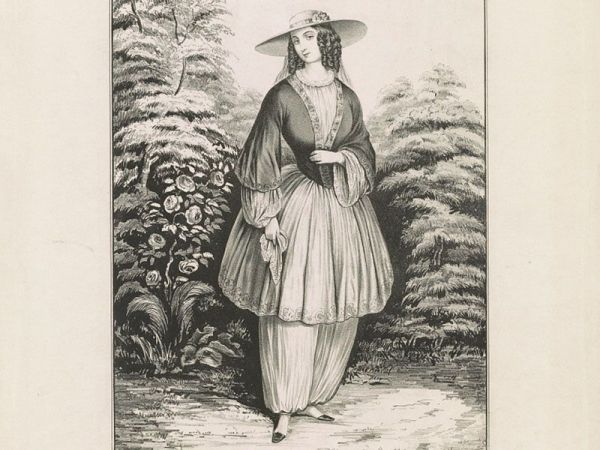 The expected dress of a proper women in antebellum America was hot, uncomfortable, and impractical. The preferred silhouette required a cinched waist, multiple petticoats, and a floor-length skirt. All that fabric was dangerous for a working woman, and even upper-class housewives had trouble maneuvering. Imagine climbing stairs with a lamp in one hand, a baby in the other arm, and trying not to trip over your skirt. That’s where bloomers came in. But they were not invented for Amelia Bloomer -they were just named for her.

An editor of the Seneca County Courier had one idea: maybe women could avoid the discomfort and dangers of their attire by switching to “Turkish pantaloons and a skirt reaching a little below the knee.”

The editorial, written in February 1851 by a man who had previously opposed the women’s suffrage movement and the 1848 Seneca Falls Convention, drew the attention of one feminist. Amelia Bloomer was herself an editor of the first women’s newspaper, The Lily. She used her paper to gently upbraid the Seneca County Courier writer for supporting dress reform, but not women’s rights.

At almost exactly the same time, Bloomer’s neighbor, suffragist Elizabeth Cady Stanton, received a visit from her cousin, Elizabeth Smith Miller—who was wearing the very outfit Bloomer had just been discussing in the press. Alternately called “Turkish trousers” or “pantaloons,” the outfit combined knee-length skirts with loose pants. Stanton exclaimed over the style and made herself up in the same way. Bloomer wasn’t far behind, feeling that it was her duty to do so, as she’d engaged in the question of women’s dress in the media, and announced her decision to her readers in the April 1851 edition of The Lily.

The practical bloomer outfit became a sensation, but didn’t last long. Amelia Bloomer’s suspicion that they were a distraction from more important battles was precient. Read about the rise and fall of bloomers at Smithsonian. -via Strange Company