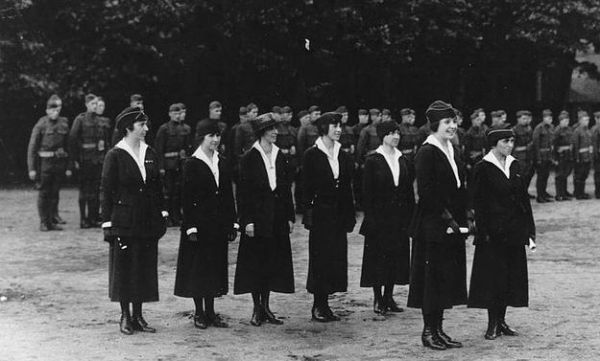 In 1917, a group of 450 bilingual women were sent to the front lines with the U.S. Army Signal Corps as telephone operators for the American Expeditionary Forces in France. Telephone communication was still fairly new, and the women dubbed the “Hello Girls” connected 26 million communications between forces to facilitate U.S. efforts. They deciphered secret codes, checked for wiretapping, and facilitated emergency communications.

The telephone was this very specialized department that in retrospect seems kind of simple but was at the time a very high paced, high-pressure kind of occupation. You had to multitask. You had someone yelling at you in one ear, you’re writing down notes about where the connection is going, you’re looking for other lines that are flashing because other calls are coming in, you’re trying to see which calls have switched off — and they were doing this all at once. They found that women were better at it. Before the Hello Girls were recruited, the average male Army recruit could connect a call in 60 seconds. It took the average woman ten seconds. In wartime, the difference between 10 and 60 seconds is life and death.

The Hello Girls had taken military oaths and were told they were in the army, yet when they came home they were treated as civilian contractors. They were given no discharge papers, no military records, and no veterans benefits. It was only in 1977 that their military service was recognized, and just this year, the Hello Girls Congressional Gold Medal Act was introduced in Congress. If the act is passed, 101 years later, all the Congressional Gold Medals will be awarded posthumously. Read about the Hello Girls at Task and Purpose. -via Metafilter