I’m sweating, delivering jabs, upper cuts, and the occasional left hook at an opponent who won’t go down. I drop my guard and WHAM! My vision goes white. I blindly raise my arms to protect my head—but my enemy comes back into focus. Careful to keep up my guard, I deliver a flurry of blows until his guard is worn and his eyes glaze over. I’m about to hammer the final blow when the bell rings. I take off my Oculus Rift virtual reality headset. The sweat’s real, but my enemy isn’t.

I’m on the second floor of VR World, a two-story virtual reality paradise on Manhattan’s 34th Street, just 50 feet from the Empire State Building. The space bills itself as the “largest virtual reality experience center in the western hemisphere,” and it certainly has the widest selection of VR anywhere in New York. The building’s two active floors packs around 50 games, films, and experiences, hand-picked to smash the barriers keeping the world from diving inside virtual reality. 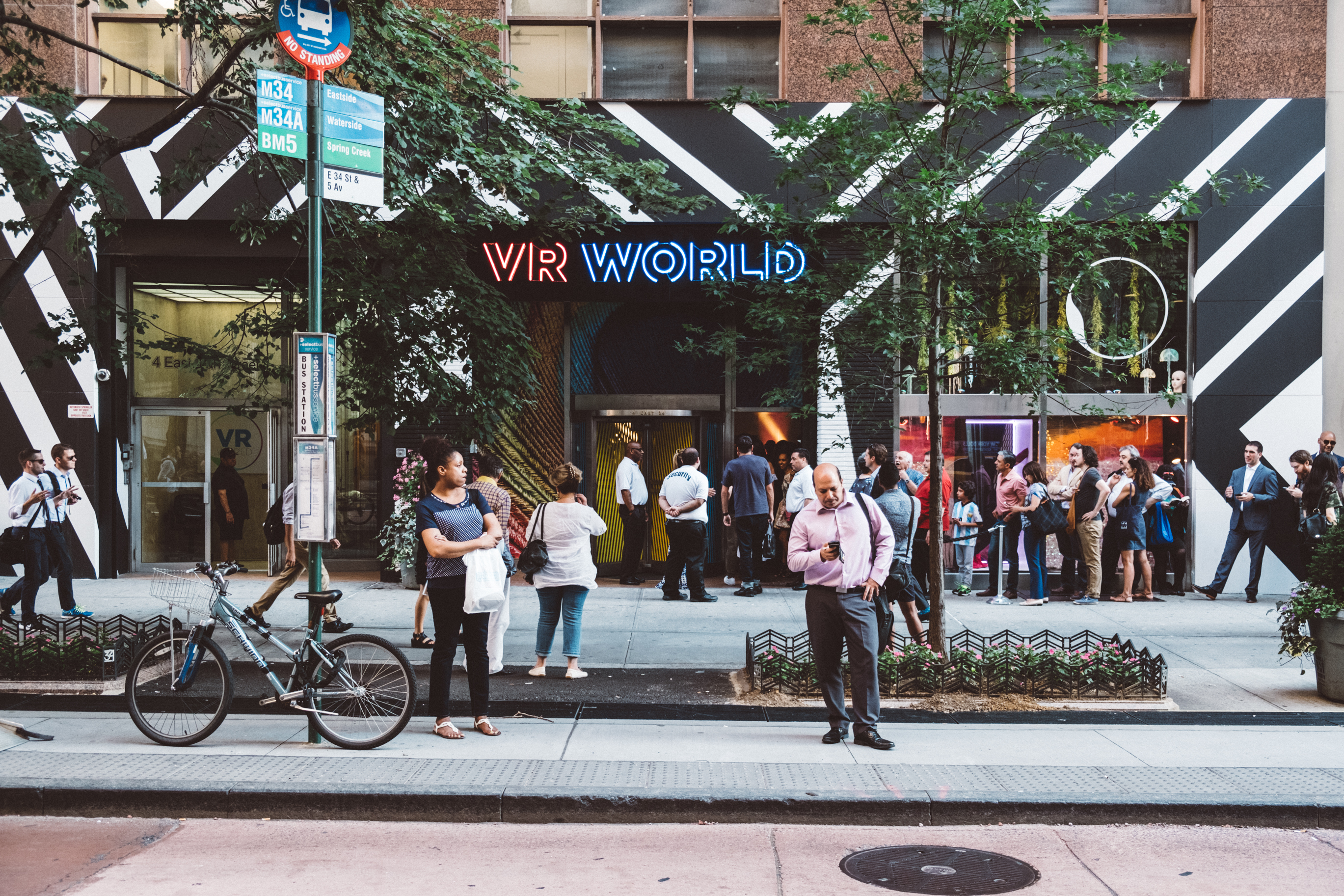 If you’ve seen Kanye West’s uncanny “BLKKK SKKKN HEAD” music video, or the small army of digital Beyoncés who performed “I Was Here” at the 2012 United Nations World Humanitarian Day celebration, you know Arnold’s work. He’s an expert at breaking the rules of reality in to make his own mesmerizing virtual worlds. Arnold and his company, Lit VR, have partnered with West’s Donda, Nick Knight’s SHOWstudio, Universal Studios, The Museum of Sex, Alexander McQueen, among others, to create boutique virtual experiences—but VR World is more than any of them: it’s an appeal to the masses.

Since the operation’s soft launch on June 21, visitors have ranged from VR-familiar invitees to tourist families drawn in through the front door by its bright logo and surreal window display. This, like every aspect of VR World, is by design. “People can come here and experience VR without having to drop thousands of dollars on a headset,” Arnold tells Creators. “We stayed away from the arcade, TRON, gaming aesthetic. We love those cultures, but we also want to talk to people who are coming in from Times Square.”

Also VR World’s Creative Director, Arnold, along with his team, curated the menu of experiences to be accessible and usable over long periods of time. There are 360° short films, zombie, puzzle, boxing, and racing games. There’s a flight simulation exercise machine, and medical VR equipment doctors use to examine virtual tumors inside real brains. “VR isn’t just a tool for entertainment,” Arnold says. “We want to show how people are going to use it every day.” 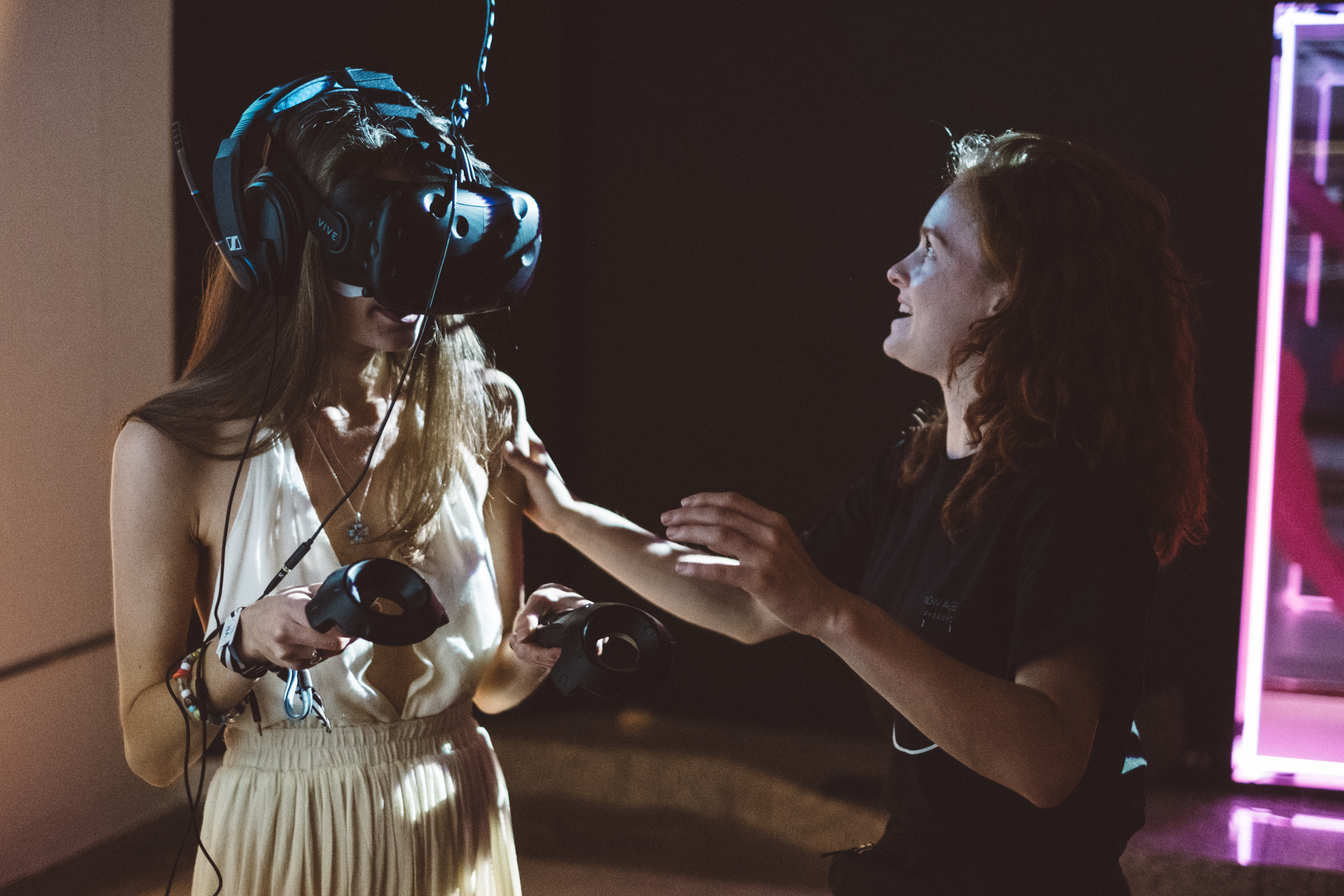 Part of the attraction is that it’s a transitional space designed to keep visitors comfortable as they phase from one reality to the next. Just the idea of “mixed reality” is too much for most people to fathom, but VR World seeks to be their entrée. The vibe is part nightclub, part amusement park, and part art gallery, an aesthetic Arnold describes as “MoMA meets K-Pop”: pink and blue tree branches arch from floor to ceiling in the lounge, ensconced between a virtual escape room and a stocked bar. A tasteful soundtrack greets viewers when they enter the premises and return from each dive. Germaphobes can relax, as each visitor gets a disposable face mask to keep the headsets clean. Even then, a nearby attendant promptly sanitizes the Oculus Rift after each visitor.

Thoughtful structural innovations also improve the experience. A custom queuing system uses RFID bracelets to eliminate lines, texting you when it’s your turn. A $39–$49 day pass grants unfettered access to VR World until closing time, which is between 10–12 PM depending on the day. For comparison, a ticket to one of IMAX’s new VR experiences will run you $7-$15 for a single 15-minute experience.

At this point, VR World has a consistent selection of the the VR entertainment industry’s most popular offerings, and Arnold has big visions for his creation. “We’re a home for people who want to do more than just play,” he says. The plan is to create an environment where visitors can contribute as much to the market as much as consume it. In the near future, that means live performances and multilayered activations within the space. Furthermore, Arnold envisions VR World arts incubator and even an in-house cryptocurrency that can be redeemed for prizes. Think Bitcoin meets Chuck-E-Cheese tickets.

Major industry players from all sectors are trying to figure out how to sell VR, from Google and Samsung to IMAX and Disney. VR World, on the other hand, brings the medium to the masses. We’re paying attention—at bare minimum, it’s a great place to box without the bruises.

These Smart Gloves Let You Feel Things in Virtual Reality